Secretary General António Guterres yesterday declared that the fossil fuel companies should be forced to pay windfall profits taxes for their role in the climate crisis, and that the money should be distributed to poorer nations forced to suffer from its impacts. 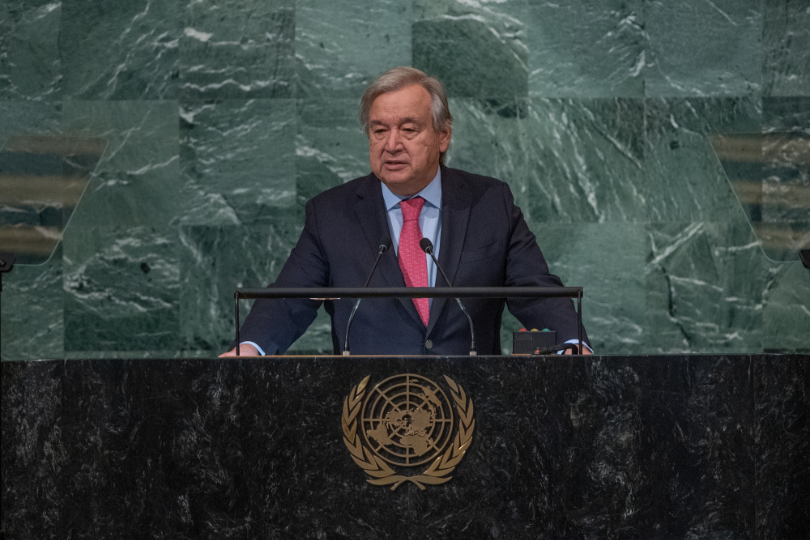 UN Secretary General António Guterres, addressing the General Assembly of the United Nations on September 20, 2022. In his speech he admonished all for the world being "gridlocked in colossal global dysfunction", with "The UN Charter and the ideals it represents...in jeopardy."  Photo: António Guterres, via Twitter

The call came in an address to all members of the UN General Assembly yesterday.

Guterres made the angry and tough speech after having just visited Pakistan to look at global heating and the climate crisis have ravaged the country almost beyond recognition.

Pakistan has recently been deluged with record rains and consequent flooding which have put an estimated one-third of the country under water. The rainfall, coming in at 375.4 mm (approximately 15 inches) in total this summer, amounts to 2.9 times the average for the region. An estimated one in every seven people in the country, some 33 million, have been affected directly by the floods. Half the country’s crop production is also gone as a result.

It is estimated it could take over ten years for the country to recover from the damage done. That of course assumes the country does not have to deal with another such horrific climatic event during those years. Historical trends and the escalating trajectory of climate-driven extreme weather events in and around Pakistan suggest instead that country will be dealing with far worse conditions during the decade ahead.

It is part of a regional resetting of the monsoon and rain tracks in the region that global heating has caused. During the next twenty years, it will transform Pakistan, India, and Bangladesh into an area of extended flood zones in some places, spreading drought in others, and murderous heat waves as the new norm.

While visiting the submerged lands of Pakistan, Guterres labeled the storm which brought the rain as “a monsoon on steroids”.

When the Secretary General took the podium at the UN yesterday, he was angry, at himself and the globe as a whole. And for much more than just climate justice for developing countries which often shoulder the majority of the burden for an overheated planet.

“Our world is in big trouble,” he began.

“Let’s have no illusions,” he said. “We are in rough seas. A winter of global discontent is on the horizon, a cost-of-living crisis is raging, trust is crumbling, inequalities are exploding and our planet is burning.”

“We have a duty to act and yet we are gridlocked in colossal global dysfunction,” he continued. “The international community is not ready or willing to tackle the big dramatic challenges of our age.”

Previously, the Secretary General had attacked the governments and citizens of the planet for their reckless “addiction” to fossil fuels as the backbone of economic life. He slammed continued investments in drilling and widespread oil and gas subsidies as “moral and economic madness”.

Above are highlights from the full speech UN Secretary-General António Guterres delivered to the General Assembly yesterday. Video Credit: YouTube.

In yesterday’s keynote address, he demanded a worldwide “intervention” by governments to halt that addiction. It must be so radical, he explained, that it would force the companies sucking the oil and gas out of the earth to halt much drilling and exploration. And that the entire global business ecosystem and infrastructure associated with fossil fuels would be forced to restructure along far more sustainable lines.

He did not say so, but it was clear in his words that even capitalism itself, which thrives on buying more and rising consumption in order to function has to come to an end.

Guterres told the General Assembly members in attendance that it was time to end our “suicidal war against nature” because “our planet is burning”.

“The climate crisis is the defining issue of our time,” he continued. “It must be the first priority of every government and multilateral organization. And yet climate action is being put on the back burner – despite overwhelming public support around the world.”

The intervention that must happen must involve every aspect of government, the industries and individuals who burn the fossil fuels, the institutions which support the status quo, and the oil and gas companies themselves.

“That includes the banks, private equity, asset managers and other financial institutions that continue to invest and underwrite carbon pollution,” Guterres told those attending the forum.

“And it includes the massive public relations machine raking in billions to shield the fossil fuel industry from scrutiny. Just as they did for the tobacco industry decades before, lobbyists and spin doctors have spewed harmful misinformation. Fossil fuel interests need to spend less time averting a PR disaster – and more time averting a planetary one.”

The public relations comments is mirrored in hearings recently conducted in the United States Congress, which have demonstrated in hearings as recent as last week that oil and gas companies have known for fifty years about how burning fossil fuels is directly responsible for increased temperatures on the planet. Those companies have also known how that global heating would melt the ice at the poles, in Greenland, and in mountain regions across the world, raising sea levels. They have known how rising ocean temperatures would give birth to more powerful extreme weather.

And the fossil fuel companies hid it all from us. They also paid for a worldwide propaganda campaign to sow doubt about the reality of the climate crisis. They also funded politicians to block tougher emissions regulations and to keep subsidies coming.

He urged the nations before him to make the tough choice to impose windfall profits taxes on the fossil fuel companies.

They can certainly afford it. As second quarter results were announced this summer, ExxonMobil, Chevron, and BP all declared record profits, of $17.8 billion, $11.6 billion, and $8.5 billion, respectively. They exploited the short-term shortages caused when western nations imposed bans on Russian oil and gas after the Ukraine war, by raising prices even when there was no significant increased cost of production on their end. They did so even while bringing in government money to increase production further, even though this incentive money was supposed to bring prices down.

Guterres told his audience that the special taxes he was proposing would of course come primarily from wealthier developed countries. He called for the monies drawn in to be redistributed to mostly poorer developing nations. The funds would be used to help address climate disasters as they happen. It would also be applied to create systems and models to predict future disasters in advance, and to build climate resilience in those nations.

The Secretary General also reminded representatives in the audience attending from the developed nations to begin living up to their pledge to double climate adaptation funding by 2025. They made that commitment during the COP26 United Nations Climate Change Conference in Glasgow last November. Since then for most those pledges have just been talk.

It is “high time to move beyond endless discussions”, he told his audience.

Guterres remarks are timely, as plans are in place this week for the most climate-vulnerable nations of the world to demand a “climate-related and justice-based” worldwide tax from the wealthier nations. The tax, outlined in a paper not yet distributed to the assembly, would include as components a global carbon tax, a levy for all fossil fuel extraction projects, fees on gas and oil sales, an adder to airline fares, and taxes on the use of carbon-based bunker fuels in maritime vessels. 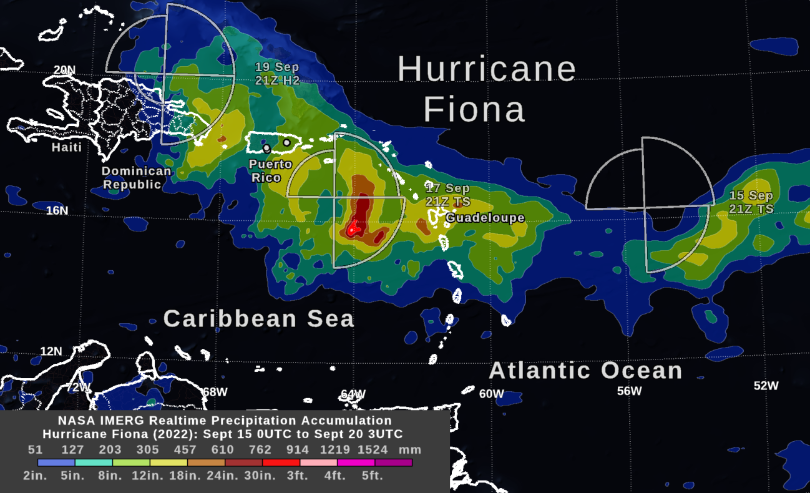 The proceeds of the tax proposed by the climate-vulnerable group would help pay for loss and damage countries like Pakistan earlier this month, and for wreckage during the last two days as Hurricane Fiona pummeled Puerto Rico and the Dominican Republic with Category 3 sustained winds and up to 30 inches of rain. The same hurricane also blasted across the Turks and Caicos islands, a British territory, with sustained winds of 115 mph and storm surges of 5 to 8 feet.

A parallel document already submitted to the UN by Antigua and Barbuda is asking for storm mitigation fees as tropical storms become more frequent and powerful. That paper provides as evidence weather models which predict that rising temperatures in atmosphere and waters of the Caribbean could are likely to result in at least one extraordinary storm causing $8.6 billion dollars of damage just in one pass. That is equivalent to six times the annual GDP of the island.

Whether a global tax on the fossil community will ever take hold is questionable, especially in the United States where the political process would make it mostly impossible. In the United Kingdom, however, the country already passed a 25% windfall profits tax on oil and gas companies drilling in the North Sea. The European Union is also planning its own fossil fuel company windfall profit tax, with a goal to raise €140 billion (US $!39 billion). Sadly, it is intended just to ease some of the burdens of soaring energy prices rather than to anything about the climate crisis itself.

While all should pay close attention to Secretary General Guterres' admonitions, a carbon tax won't stop catastrophic climate change and just giving money to developing nations hasn't accomplished much yet. Most of the tens of billions already spent on climate adaptation has been wasted due to corruption and poorly conceived projects. Thinking that we can solve the climate crisis by simply throwing money at it is wrong.

Pakistan continues to be so devastated by natural and un-natural disasters because its government is grossly corrupt and incompetent and doesn't meet the needs of the people. The reason Pakistan (and most every other country) has such bad government is a complex issue but ultimately it comes down to culture.

The stark reality is that our civilization was built around cheap fossil fuels and most of us lead very energy intensive lives. Far too many are forced to commute long distances to work, our food system uses vast amounts of energy, water and other resources. Most homes are not well insulated and waste a lot of power. Our cities waste vast amounts of energy lighting empty roads and store signs that no one sees in the middle of the night and were not designed for climate extremes. We ship raw materials halfway around the world to be manufactured into consumer products that then get shipped back to us. Many developed countries can't even do their own recycling of simple things like glass, metal, plastic and paper an so waste more energy by shipping them off to some distant poor country to deal with while patting themselves on the back about how green they are.

We need a new climate-proof and sustainable civilization—one that isn't reliant on looting the planet, doesn't revolve around profit at any price, throw-away consumerism and perpetual growth in a finite system. And no, this doesn't means Marxism, communism or some other tyrannical political system. It means an intelligently designed civilization that meets both the needs of humans and nature.

Had we started 40 years ago we could have sustained our wasteful civilization for a few decades longer by substituting clean energy for dirty energy, but we didn't and now it is too late. Now we have to deal with the collapse of our current civilization until someone engineers a new and better one.

It all starts with a new culture that values nature while nurturing human evolution in a positive direction.

If you would like to help design and build that new and better culture and civilization please visit https://www.climatesurvivalsolutions.com.