As Pakistan deployed emergency crews to save those homeless, hungry, and without water because one-third of the country was under water from recent floods, its largest lake was about to crash through surrounding banks. 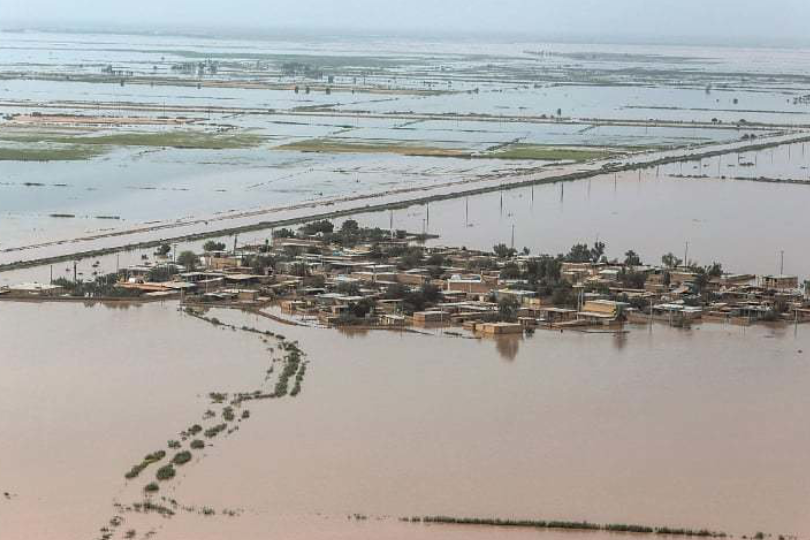 Flooding from the monsoons in 2022 has reached catastrophic proportions. It is estimated it may take over 15 years for the country to recover from this disaster. Photo: NasDar Draws, via Twitter

As of the end of August, shifting intense weather patterns driven by the climate crisis and global heating have pushed record waves of monsoon rainfall across Pakistan, with more rainfall on the way.

Overall, Pakistan had already received 375.4 mm (approximately 15 inches) of rain this summer. That is approximately 2.9 times the average rainfall for this country. A minimum of 110 districts in the country have been impacted by floods in one way or another.

The damage from the rain has been staggering, with the National Disaster Management Authority saying as many as 33 million people have been directly affected by the flooding which followed the rains. That works out to one in every seven people in this country of approximately 236 million who have suffered already from what happened.

Of those affected, approximately 52,000 people have already been rescued by the surging waters. Approximately half a million people have been relocated to makeshift camps since their homelands were rendered uninhabitable.

Much of that rain centered in the regions of Balochistan, Sindh, and large sections of Punjab. In those focus areas the increased rain amounts blew through all past records. During this time Balochistan was deluged with 5X its thirty-year average rainfall amounts, and Sindh was drenched with 5.7X its thirty-year amount.

According to national authorities, as of September 5 the flooding had killed an estimated 1,314 and injured 1500, though it also says these numbers are preliminary and likely to increase more after the waters subside and bodies are discovered.

Physical impacts of the flooding are widespread and beyond imagination. Around 3500 kilometers (2175 miles) of road have been wiped out. 149 bridges have been destroyed by the rains and floods so far, though that number is expected to go up quickly after inspections can happen. Approximately 663,000 homes have suffered significant damage and over 288,000 have been demolished completely. 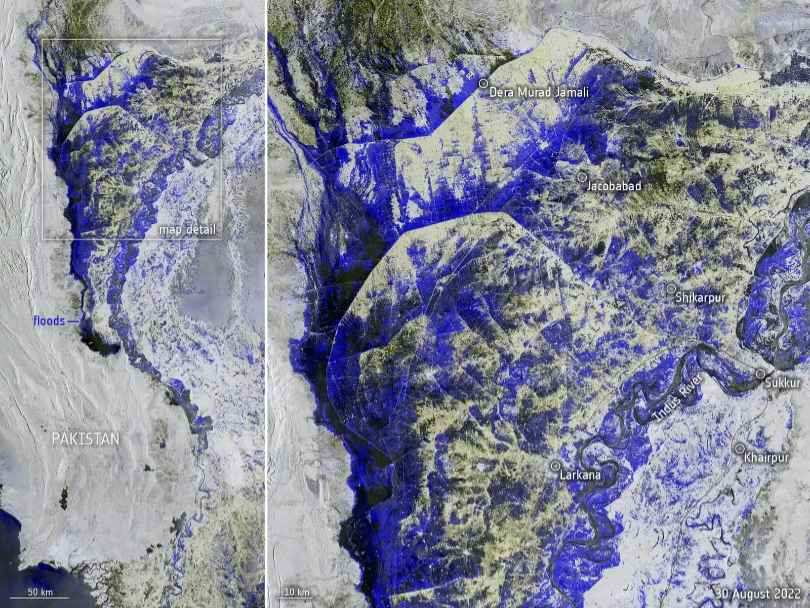 Images of the flooding spreading out over Pakistan from the Indus River valley, as of August 30, 2022. Image taken via the ESA\'s Copernicus Satellite system. Photo: European Space Agency

Based on satellite images and a tour of the damaged region by Prime Minister Shahbaz Sharif, experts say as much of 90% of the crops in the region have been destroyed by the floods. With these lands responsible for producing approximately half the country’s food supply, it makes the country fully dependent on outside aid just to feed its people for some time to come.

An estimated 720,000 livestock have also died in the disaster.

Local waterways have already breached their banks throughout much of the Indus River system.

Those breaches, added to the intense raw rainfall, have currently covered an estimated one-third of the country in water. That was confirmed by recent satellite images taken by the European Space Agency’s Copernicus program on August 30.

“The Indus River has overflowed, effectively creating a long lake, tens of kilometers wide,” the ESA wrote in a prepared statement about the disaster.

One of the areas which had not yet fully breached was at Lake Manchar, the nation’s largest freshwater lake, located west of the Indus River, in Jamshoro District and Dadu District. Under normal conditions, it has an average depth of just 2.5 to 3.75 meters (8.2 to 12.3 feet), with the higher level happening as monsoons typically reach their strongest.

As of September 5, water levels at the lake were 7.62 meters (25 feet) higher than usual. This put intense pressure on the banks to contain the waters, especially since water was still streaming in from rivers nearby and across the flooded lands in the region.

Water was already overflowing at Lake Manchar’s RD-62 regulator gate in Bobak and was threatening to destabilize the gate.

If a full breach of the lake were to happen, an estimated 100,000 people in nearby southern Sindh province would be threatened by life-threatening flash floods and would need to be evacuated on an emergency basis.  That is according to projections provided by Khan Shoro, the irrigation minister for the area.

On that day, authorities executed strategic deliberate breaches at the edges of the lake, most recently at a locatioo identified as RD-14, in Bagh-e-Yousuf. Other breaches were previously cut at locations RD-55 and RD-80.

“By inflicting the breach we have tried to save the Sewan town,” Shoro told reporters after the planned breaches were cut.

The impact of the cut, Shoro said, would still require many to be evacuated but would reduce “water levels in the Johi and Mehar towns in Dadu”.

As of yesterday, the news was already in that the pressures on Lake Manchar were still too high and the deliberate breaches were not accomplishing what had been hoped.

“The water level at Manchar Lake has not come down,” Shoro told reporters yesterday.

If further attempts at releasing pressure on the lake’s banks continue to fail, the government will have no choice but to order an immediate mass evacuation in the flood zones nearby.

Refugee agencies from around the world have flown in emergency food, water, and other humanitarian goods to help where possible. The United Nations Refugee Agency (UNHCR) has already had multiple flight runs into Karachi, the capital of the Sindh province. Getting the supplies to where they are needed after landing is a problem, however, as roadways are impassable, and a combination of helicopters and boats are about the only ways to reach most of those stranded.

Prime Minister Sharif’s government has put a price tag of over $10 billion on what it will cost to rebuild damages to the country. That is up and beyond the immediate food crisis the flooding has caused.

While asking for help, Sharif and the United Nations have put the blame for what has destroyed daily life in the country on global heating and the climate crisis. Sharif has also said his country has had little to do with the cause of the crisis, considering that his country is only responsible with around 1% of the world's global greenhouse gas emissions.

The prime minister says much bigger nations such as India to the south and the United States, as the countries which should be shouldering the responsibility for what has happened. Many of those nations have come forward with some funds, including $30 million in aid from the United States, but it is literally just a "drop in the flood" of what those countries owe the planet.