Temperatures are reaching record levels as a heat bubble which formed on August 30 showed no immediate signs of letting up. Warnings to conserve energy and power blackouts followed, and threats of new wildfires loomed. 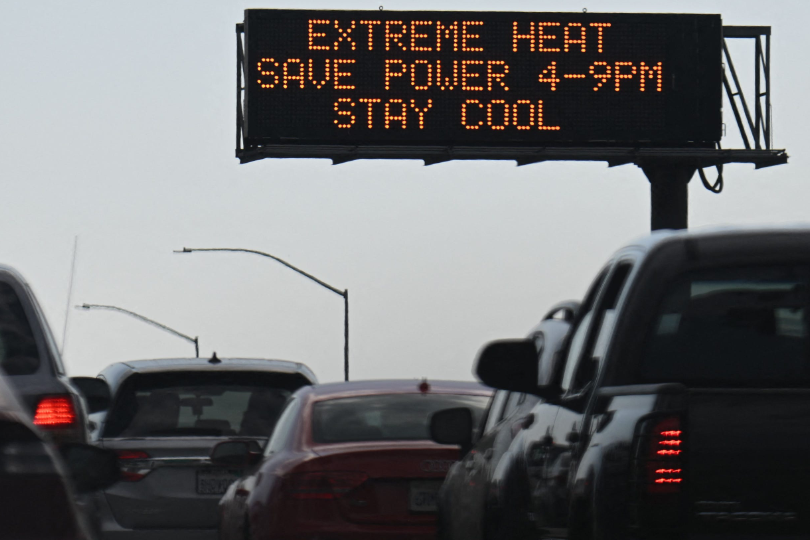 Government officials warned drivers in the Los Angeles area this weekend to save energy at home during peak power usage times. A good starting point would have been to get off the roads and stay home, rather than to dump even more greenhouse gases into the air to make the future even hotter. Photo: Mildred Kennan, via Twitter

Asphalt on playgrounds in some sections of Los Angeles turned into potential burn sources, with temperatures measured at over 145° F (63° C) as heat was stored and re-radiated out.

In the deserts, Death Valley held temperatures of over 120° F (49° C) for five days in a row. It could break a record of 126° F for highest temperature ever by September 6.

While Southern California was baking from the heat wave, the rest of the state was not doing much better.

In the Central Valley area, Bakersfield, where farmworkers toil outdoors for some of the longest periods as it is harvest time, temperatures reached 111° F (44° C).

In the San Francisco Bay area, while temperatures had been moderating, they are due to increase sharply as the heat wave spreads and deepens. Silicon Valley’s San Jose is projected to reach 102° F (39° C) on September 5. On the same day Santa Rosa in Marin should spike to 108° F (42° C) and Napa, in the wine country where a little excess heat can do considerable damage to the vineyards, will reach 104° F (40° C).

East of San Francisco, the state capital of Sacramento has already experienced four continuous days of temperatures over 100° F (37.8° C) and is on track to keep that going for another six days. National Weather Service projections have the city about to break its long-standing high temperature record of 109° F (43° C) on September 6.

The temperatures in the southern part of the state will stay high at least through September 7, and those in northern California will keep the heat well into the end of the week.

The impact on everyday life is significant, as multiple power outages a day have happened throughout the state while people are forced to seek cooler temperatures indoors.

The state suffered from the power blackouts despite having installed additional generators in many areas. Air conditioning and other major power sources were being switched off from the late afternoon to early evening, to comply with voluntary cut requests from local utilities.

These happened despite state officials issuing going back to August 18 to turn off lights and appliances in there homes from the peak usage hours of 4 pm to 9 pm, and to preset thermostats on their air conditioning to 78° F (26° C) to conserve power. As in most past requests from the government, this one was unfortunately mostly ignored by residents.

Public libraries across the state were repurposed into cooling centers for those in need. In Los Angeles, the entire county library system was opened up for this purpose on September 4. A statement released by library spokesperson Jessica Lee said it would “be staffed by library workers who have agreed to work over the holiday weekend”. 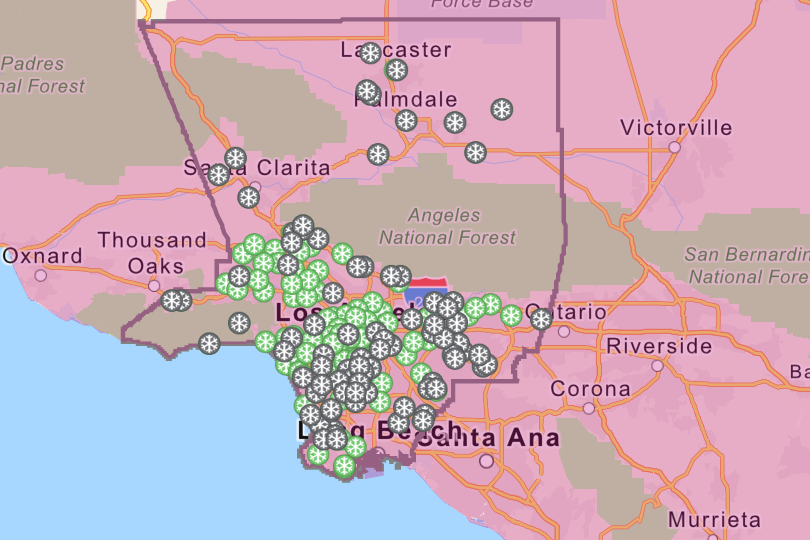 A map of open cooling centers in the Los Angeles area as of September 5, 2022. A live version of this map incorporating all current updates is available here. Photo: Los Angeles County

In San Diego, the Neil Morgan Auditorium at the San Diego Central Public Library, plus recreation centers in Balboa Park, City Heights, Nobel, and Pacific Beach, among others, were also announced as open as a place to cool down this weekend and re-hydrate.

Other cities in most major metropolitan areas had similar programs in place.

Emergency water distribution was also in place for homeless in the bigger cities of the state. Even with that many who have no shelter are expected to die during this heat wave.

The California Department of Industrial Relations issued its own warning to employers who have workers outdoors, such as in the fields. The warning reminded them of the need to provide breaks, sufficient drinking water to stay hydrated, and access to shade during the peak temperatures.

In parallel, labor organizers and politicians representing garment workers, who are literally working in hothouse conditions in packed unregulated buildings throughout the state, held a news conference demanding more protection for their people during times of high heat like these.

In the early afternoon of August 31, the Route Fire broke out in Castaic, a small town in the hills north of Los Angeles. The fire eventually spread to cover over 5,200 acres along the edges of Interstate 5. At its peak, it forced the shutdown of that critical roadway for hours at a time. It took several days to contain but is now 87% under control.

In the northernmost part of California, the Mill and Mountain fires broke out on September 1 and are still threatening major regions. The Mill Fire, which was only 25% contained as of September 2, had already caused injuries and destroyed 50 structures.

The fire danger is considered so high in the state that several regions have begun closing local parks to prevent risks of accidentally setting off fires. In San Francisco’s East Bay, where Pleasanton, Dublin, and Concord are located, the East Bay Regional Park district has shut down those parks for the rest of the weekend.

The high heat, added to the ongoing 1200-year megadrought throughout the state, could make this the most treacherous late summer and early fall in modern California history. More heat is likely to come as the month of September continues and even into October, and water shortages which have already afflicted the entire state are only going to get worse as rainfall stays low and what is left on the ground dries up.

“What makes this heat wave different is the duration,” said Sarah McCorkle of the National Weather Service’s San Francisco Bay office this weekend. She said the 100° F heat is expected to last seven days or longer in many areas.

As this current heat wave was just beginning, Governor Gavin Newsom attempted to put the situation in context, without sugar-coating the difficult truth that living in the age of the climate crisis has become.

“For years and years and years, and I would put this in global terms, we — all of us — have been trying to outrun Mother Nature,” he said. “But it’s pretty clear that Mother Nature has outrun us. The reality is, we’re living in an age of extremes — extreme heat, extreme drought — and with the flooding that we’re experiencing around the globe — just ask folks in Missouri and Kentucky or in Pakistan — the extreme floods [too] as a consequence.”

Like most cities around the world, California's cities were not designed for the current and likely future conditions. Everything was designed around cheap fossil fuels, cars, urban sprawl and mass consumption. Homes were not insulated for extreme temperatures, there was no intention of re-using water and industry ensured that mass transportation was removed.

Adapting our existing civilization to the new realities will be difficult or impossible, not just due to the cost and technology but also because our society is poorly suited to rapid change. We are also simply out of time. But we had enough time, if we started when it became crystal clear what would happen in the future.

The greenhouse effect was first discovered in the 1800's. In 1959, physicist Edward Teller informed the America Petroleum Institute (API) at its annual meeting precisely what would happen if humanity kept burning fossil fuels. This was confirmed in the 1960s by a secret study commissioned by the API and conducted by Standford Research Institute. The API's response was to execute a highly effective and long-running disinformation, corruption and social engineering program designed to suppress the truth and prevent any action from being taken

Every American President since Johnson was informed of the peril of global warming and climate change. They all knew that if they did nothing it would result in what is unfolding now. All chose to do nothing meaningful and continue to do so.

It was not until 1988 that a significant portion of humanity learned what had been kept quiet for so long, when NASA scientist James Hansen spoke before Congress and the media decided to finally carry the story. In response, the API doubled down on their disinformation campaign and replaced politicians who didn't support their agenda of destruction for profit. As a result, a significant percentage of Americans are still unwilling to accept the basic physics of global warming. Fossil fuel consumption continues to increase instead of decrease and tipping points have ensured that it is now too late to avoid catastrophic runaway climate change.

Today, the extreme temperatures, floods and droughts are merely an inconvenience for most and those who are dying from it are mostly far away and easy to tune out. But, soon, most of humanity will be impacted and it won't be so easy to tune out.

California can certainly increase power production to provide more air-conditioning, but it isn't, and is instead requiring everyone to buy electric cars they can't charge because there isn't enough power. They could start recycling water, but they aren't, they are just taking ever more away from farmers to flush down their toilets and giving more to the fracking industry. California could build more desalination plants but they aren't because those are very energy intensive, take decades to design, permit and construct and cause their own environmental harms.

California and the rest of humanity are rapidly running out of time and still have no intelligent plan to move forward towards climate survival and sustainability.

The reality is that we can't save our old way of life. Earth cannot sustain us as a mindless parasitic species. We must transform into Earth's caretakers and those who can't or won't will perish, along with much of the rest of life on Earth.

What is required for survival is a new approach, one that works with nature instead of against it. The public benefit corporation, Climate Survival Solutions is designing that new way of living using a multi-disciplinary team of scientists and engineers. Their solution is climate-proof, self-sufficient and truly sustainable habitats that use natural processes in a circular waste-energy-nutrients-food-water system.