Although other studies had predicted it, evidence released in a new research study show melting of Greenland’s glaciers because of global heating will produce between 10.6 to 20.7 inches (27 to 78 centimeters) of ocean sea level rise. What is different about this study is that the researchers say this is “now inevitable”. 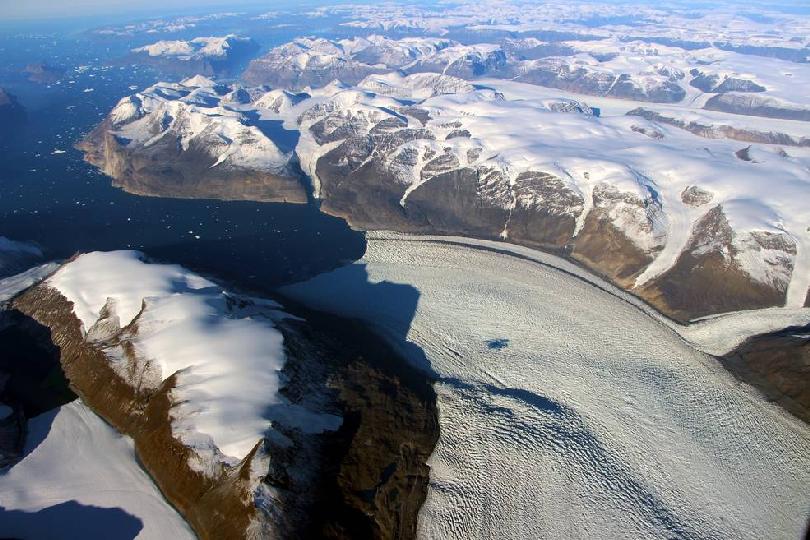 Rink Glacier in western Greenland, with a meltwater lake visible in the center. Warmer air temperatures and resulting winter rainfall throughout the year are causing the Greenland ice sheet to melt at faster rates than ever. Photo: NASA/OIB

The study, headed by Professor Jason Box from the National Geological Survey of Denmark and Greenland (Geus), was just published in the peer-reviewed journal Nature Climate Change.

It made use of satellite data which examined the shape and structure of Greenland’s glaciers and ice caps over the two decades from 2000 to 2019, the melting/refreezing cycles which followed.

It builds on past studies such as another published in February 2022 by Polar Portal, a joint research project with teams from multiple Danish Arctic research groups. In that one, it calculated that since 2002, the first year precise metrics on melting were recorded, the Greenland ice sheet has lost 4,700 billion tons of ice. The researchers at the time pointed out that calculated out to 4.7 cubic kilometers of melted water, amounting to “enough to cover the entire U.S. by half a meter [just under 1 foot 8 inches]”.

Prior to the last roughly 170 years since the beginning of the industrial revolution and significant increases in fossil fuel burning for all human uses, the glaciers were in a state of relative stability in thickness on a year-by-year basis. Though melting would happen during the warmer months of the year, increased snowfall would balance that out when the air temperature was at its coldest.

The new study examined just precisely how far the climate crisis has damaged the equilibrium of nature in Greenland which had kept ice levels in Greenland roughly constant for many millennia. The researchers then looked at under what conditions there might be a new stabilization point, meaning the presence of a lower level of ice that might be maintainable if for some reason the pace of global warming were to slow dramatically. That lower level, and the ice melting which it would mean would have already happened at that point, would then make it possible to calculate the net minimum sea level rise just from Greenland alone.

Much of the paper goes into considerable detail about the nature of the equilibrium stasis model in operation in Greenland for its glacial ice. It draws especially on the dramatic high-melt year of 2012 when nearly 1.5 million square kilometers (580,000 square miles) of ice melted, with just 3% of the total there unaffected after a warm front stalled overhead. It also includes critical data from the anomlous low-melt year of 2018, in which snowfall and resultant ice creation produced a major short-term ice surplus for the region.

There are several caveats about this analysis that even the researchers warn represent oversimplifications from their work. One is the relatively inconceivable assumption that it might even be possible to have an abrupt end to high volume fossil fuel emissions such as carbon dioxide into the atmosphere. Another is that even if all direct causes somehow came to a halt, secondary emission sources from increasing numbers of wildfires and methane release during permafrost melt are increasing as temperatures rise, as just one consideration.

A third is that Greenland is far from the only part of the cryosphere – the part of the Earth which in the past had always remained frozen – which is already shedding its ice at record levels.

One example is the Arctic, which two parallel studies released earlier this summer showed is warming at four times the rate of the rest of the planet. That has pushed the equilibrium state in that region way past its threshold, so that projections are the Arctic will soon have no sea ice at all for much of the summers. No sea ice also means higher absorption of heat into the ocean without the presence of high-reflectivity ice to send sunlight back from the surface.

Another is in the Himalayas, where a study published in 2019 showed melting of one-third of its total glacier content will happen no matter what else is done to slow the pace of global temperature rise. With that area of the world melting at a rate at least twice as fast in this century than in the previous one, it should be no surprise that melting there was responsible for 8% of the total glacial melting in the world between 2000 and 2019.

In Antarctica, both the Thwaites glacier region in the west and the East Antarctica Ice Sheet (EAIS) are also melting at a rate faster than in over 5,000 years. The Thwaites Glacier, sometimes called the “doomsday glacier” because of high instabilities, were to break off and move away from that pole to warmer waters, it would alone cause sea levels to rise by 16.4 feet (5 meters). Though it is a more distant concern mostly because of its mass, if all the ice in the EAIS were to melt, it would produce 170 feet (52 meters) of sea level rise. The still-staggering Thwaites glacier impact is consistent with worse-case temperature increase projections by the end of the century. The projected sea level rise as it melts is also backed by a study published in June 2022, which showed the West Antarctica Ice Sheet (WAIS) which encompasses the Thwaites and Pine Island glaciers would produce at least 11 feet (3.4 meters) of sea level rise this century.

The rate of sea level rise is also tied to the temperatures of the oceans themselves. As they absorb more heat, the waters swell, making the situation far worse.

In the conclusions to this study, the researchers also point out that in 2012 the presence of a stagnant far hotter-than-normal air mass over the Arctic and Greenland resulted in unusually high melt rates. Though calculations vary, a typical number was that 97% of all of Greenland’s glaciers melted that year, followed – fortunately – by a rapid refreeze of surface layers. If that 2012 situation were to recur as indications suggest will now happen far more often, the melting projections and sea level rise implications will be far worse.

As Dr William Colgan, another involved in the study at Geus, said, “The minimum of 27 cm [10.6 inches] is the sea-level rise deficit that we have accrued to date [from Greenland alone] and it’s going to get paid out, no matter what we do going forward.”

It is, he explained, simply a matter of “the climate trajectory we’re on”. He continued by exploring what would happen if that trajectory accelerated, as many projections currently suggest.

If [2012] becomes a normal year, then the committed loss grows to 78cm [20.7 inches], which is staggering, and the fact that we’re already flickering into that range [of ice loss] is shocking,” he explained.

University of Exeter professor Gail Whiteman, who was interviewed about the study but was not a part of the research team, put the truth of the sea level rise which is already on its way in stark perspective.

“The results of this new study are hard to ignore for all business leaders and politicians concerned about the future of humanity,” she said. “It is bad news for the nearly 600 million people that live in coastal zones worldwide. As sea levels rise, they will be increasingly vulnerable, and it threatens approximately $1 trillion of global wealth.”

What this means is a catastrophic financial and human impact from the sea level rise globally, which may be only slightly mitigated by instituting programs and projects in advance to survive the crisis which is already on its way.