Current European Drought Is the Worst in 500 Years

A just-released report from the European Commission says over two-thirds of the continent is now plagued by a drought of unprecedented proportions. 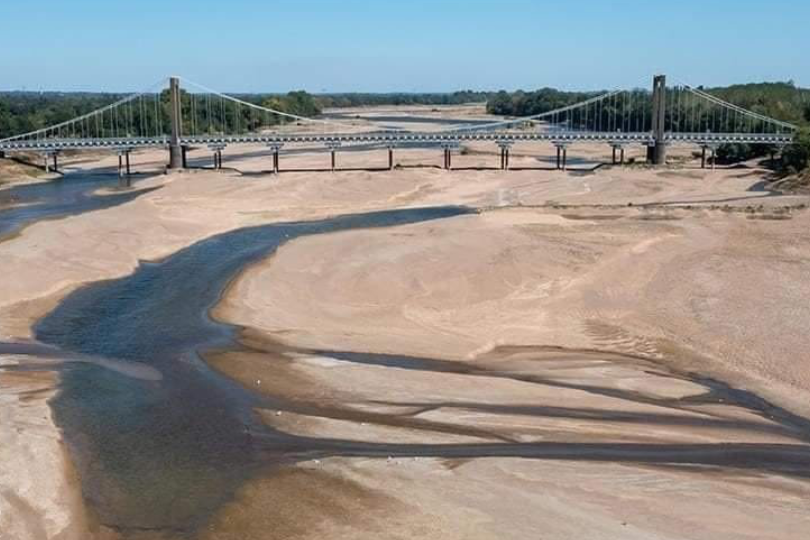 The Loire River in France is one of many in Europe which is almost completely dried up as result of the current drought. Photo taken in August 2022. Photo: Als Patch, via Twitter

A sobering new report published under the auspices of the European Commission (EC) on August 22 says the severe drought which began to deepen in the second quart of this year has become far worse since then.

According to the analysis, as of the first ten days of August 2022, the EC’s Joint Research Centre (JRC)’s Global Drought Observatory shows the continent’s Combined Drought Indicator (CDI) may be the most severe the region has seen “for at least 500 years.”

That comment comes directly from European Commission spokesperson Johannes Bahrke, in a public statement for the press when he unveiled the results of the new study.

What the report showed is that the continuing heat waves which spread from Spain and Portugal across mainland Europe in the spring and up into the United Kingdom by July, combined with a continuing lack of rainfall, have caused much of the continent to dry up.

Among the catastrophic events this has led to is the recent rapid evaporation of waters from Germany’s Rhine, which has become so shallow shipping barges are now running with much lighter loads or suspending travel completely.

In France, water levels have caused the Loire River and the Loire Valley, the UNESCO heritage site which bears its name, to dry so completely that even the famed shallow-bottomed tourist boats, which normally bring visitors to peer at magnificent chateaux from another era at Chambord, Chenonceau and Azay-le-Rideau, to run aground.

Fish in the rivers are dying throughout Europe because of the low water levels and heat. Oxygen is rapidly depleted from the rivers under such conditions, and shallow waters which heat up faster render what is left of the habitats unlivable.

As of the first ten days of August, satellite and on-the-ground reports showed 47% of Europe was under warning conditions, with 17% in full alert conditions because of the drought. 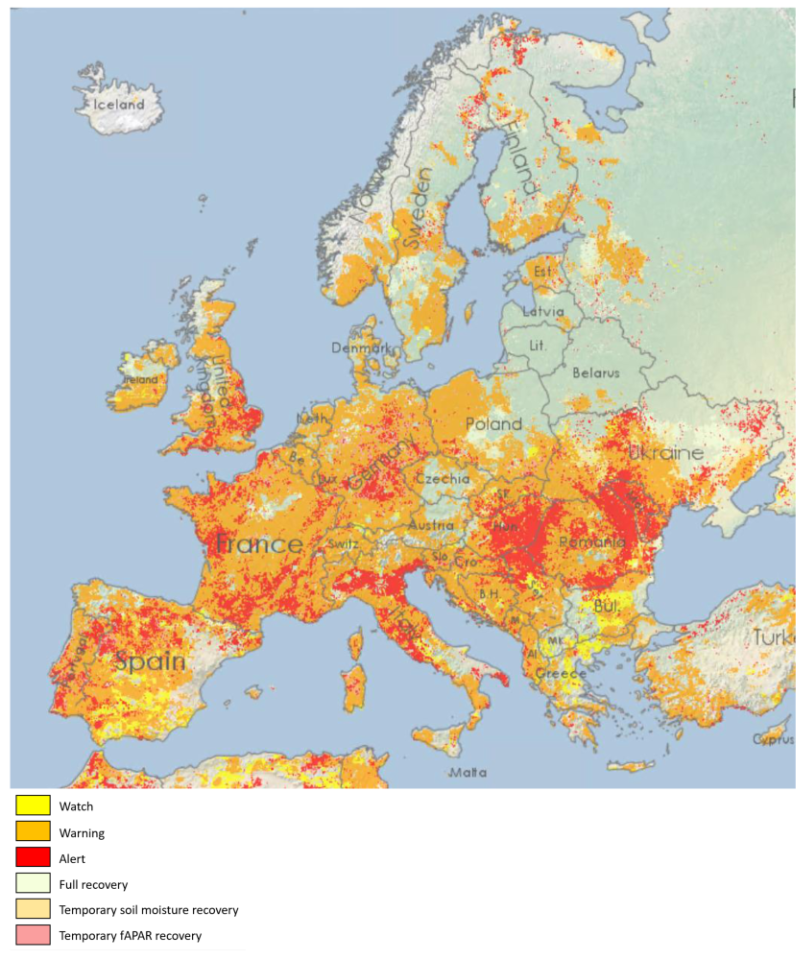 Note: The fAPAR characteristic listed in the legend for this map refers to the Fraction of Absorbed Photosynthetically Active Radiation (FAPAR) in the areas. It is a biophysical variable, derived from satellite observations, that represents the fraction of incident solar radiation that is absorbed by land vegetation for photosynthesis. Recovery areas are where FAPAR is returning back to normal levels.)

The summary goes on to say that the hazard of drought has been growing steadily worse most significantly in “Italy, Spain, Portugal, France, Germany, the Netherlands, Belgium, Luxembourg, Romania, Hungary, northern Serbia, Ukraine, Moldova, Ireland and United Kingdom.”

It explains further that other areas which already were broadly affected by drought have remained dry for the most part, with some “recovery” in some parts of central France, in Austria’s northern region, and in the Czech Republic to the south.

Those regions which were already suffering from severe drought as of the spring, such as northern Italy, southeastern France, and parts of Hungary and Romania, have deteriorated the most since that time. 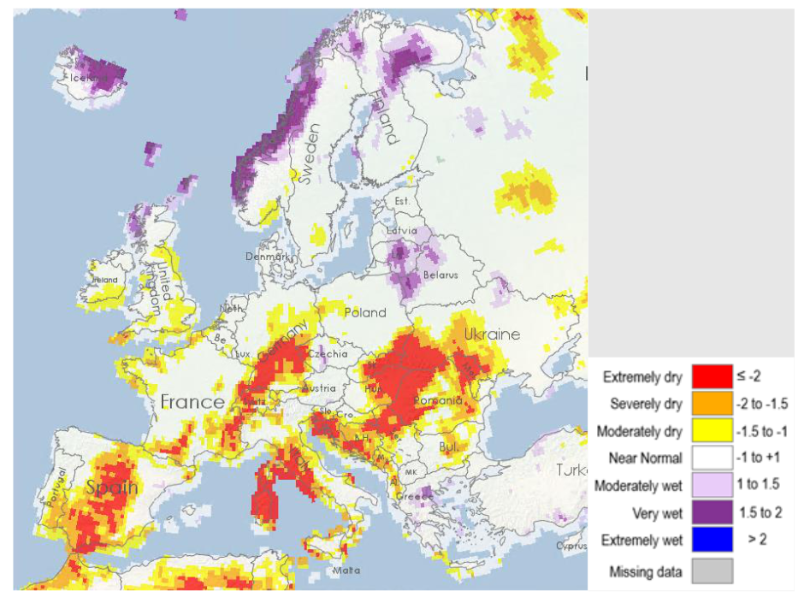 The lack of rainfall is also responsible for greatly reduced levels and flow in waterways and reservoirs in much of Europe. That has resulted in far lower hydroelectric power production on the continent. As examples, the study’s authors cite Spain as having just 58% of the 10-year average amount of water in its reservoirs, and Portugal’s equivalent “hydroelectric energy stored in reservoirs” is under 50% of the average of the last five years.

With greatly reduced access to oil and gas from Russia at this time, again as a result of the Ukraine war, this is putting the region at high risk for extended power outages and plant shutdowns.

High temperatures and lack of rainfall have also severely affected soil moisture in much of Europe this summer, as indicated in the map below. This has produced such dry conditions in the soil that crop yields are down by large percentages, especially for corn, sunflowers and their seed oils, and soybeans. The shortfalls are adding to existing food scarcity problems particularly for the first two of these, with their supply already cut back because of the Russian invasion of Ukraine. 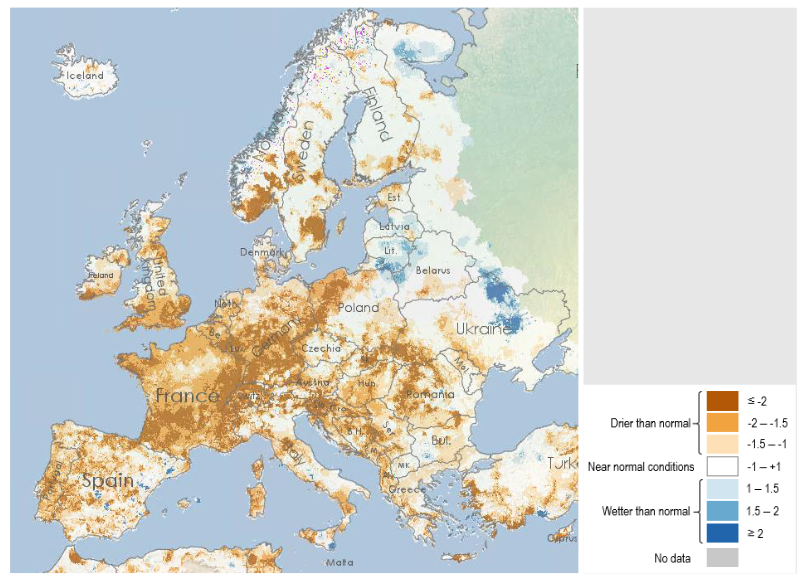 Map of soil moisture scarcity as of the beginning of August 2022. Photo: Global Drought Observatory

The heat and drought also is already bringing with it increased wildfires throughout Europe this summer. All signs point to that becoming far more serious over the next month or so.

The meteorologists studying the current drought conditions project more difficult times for the next three months. It says that the entire western Europe and Mediterranean area will stay hotter and drier than normal at least until November.

The report does say its analysis claims that even with the drought following these projections, there should be enough to meet critical needs. Considering the wide range of impacts from the current drought, it is hard to believe that will be possible for long.

The full report from the European Commission on this subject, “Drought in Europe August 2022” is available for free download.

With Europe collectively in such serious drought conditions, this makes almost every major continent on the planet now suffering collectively from extreme drought for the first time in modern human history. From southeastern China, to the western and southwestern United States, and along the Horn of Africa, the climate crisis and global heating, together with damaging long-term meteorological shifts, are demonstrating just how rapidly the planet is already being thrown into life-threatening ecological shock even now.

What is not yet known is how much of the accelerated changes are due to weather modification weapons and how much is due to the continued increase in greenhouse gases. The other unknown is the polar vortex and how the newly discovered plasma vortex high over the North Pole that pulls down cold air from the upper atmosphere will impact the climate. The laws of physics dictates that the Earth will continue heating up and that the increased energy absorption will drive increased droughts flooding and extreme storms. The will threaten all life on Earth.

For those who think we human beings have until 2050 to get our affairs to save ourselves from complete societal and species collapse, think again in light of the reality that is staring us in the face and kicking our collectives asses.

One small group of people is taking the reality of the climate crisis seriously. Scientists, engineers and entrepreneurs have come together under the public benefit corporation, Climate Survival Solutions, to develop a new climate-proof, self-sufficient and sustainable culture and civilization. One of the pillars of the new civilization are habitats based on a circular waste-energy-nutrients-food-water system. The first such climate-proof, self-sufficient and sustainable habitat is called Tataouine and it is under construction in Arizona. Additional habitats are being designed for sites in Africa and South America.