The worst drought in eastern Africa in four decades has forced the region into accelerating starvation conditions this year. 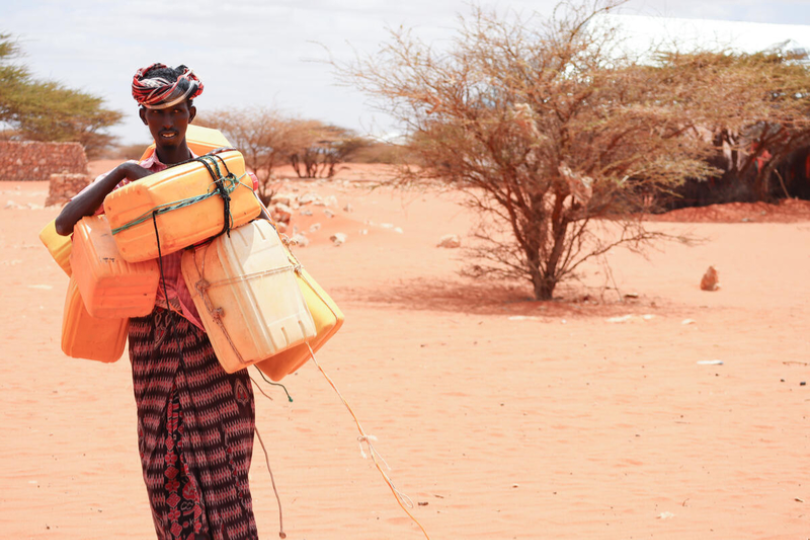 On August 18, UN World Food Programme Executive Director David Beasley completed a survey of ongoing drought conditions in the Horn of Africa and crop damage because of them.

In the last part of that on-the-ground investigation, Beasley toured multiple areas in Somalia, where lack of rainfall and high temperatures in that country have ravaged crops and dried up supplies for drinking water and even routine sanitation.

He traveled last Thursday to Baardheere, in the southern part of Somalia. There he witnessed first-hand the reality of climate migration, a new driving force moving millions of people in some parts of the world away from their homelands just to have enough water to drink and possibly grow crops. When even those resources are not nearby, those millions still travel from remote areas of their countries to seek out humanitarian aid which might be available elsewhere. In Somalia, this manifests in the form of mothers and badly malnourished children having to travel long distances, in heat and across routes plagued with armed conflict, just to survive.

In Somalia, the UN World Food Programme (WFP) estimates over seven million in the country are dealing with large scale damage to agricultural land, and are acutely food insecure, many starving. That is just under half the population and is growing rapidly, especially as forecasts ahead are for continuing months of far lower-than-normal rainfall. Around 213,000 in that country are also are in areas where food production is so scarce that mass famine is spreading.

This is happening not just in Somalia, but in nearly as dangerous conditions in other parts of the Horn of Africa such as Ethiopia and Kenya. For the fifth year in a row, the dangerous combination of high heat and low rainfall which is currently also affecting Europe, most of the western United States and Mexico, and China has taken its toll on eastern Africa as well. The United Nations calculates that a total of 22 million in Ethiopia, Kenya, and Somalia do not have enough food to eat because of this. That number is up from 13 million the World Food Programme had estimated would be in this situation when the year began.

Surveys show as many as 1.1 million people in the Horn have been forced out of their homes by the drought to seek refuge, food, and assistance elsewhere.

To address the crisis, the WFP is stepping up the amount of people it hopes to reach with food and other resources. At the beginning of 2022 it was looking to support 6.3 million suffering severe food insecurity; the new target is to provide humanitarian aid to 8.5 million just in the Horn of Africa.

That humanitarian aid, backed by grants from multiple countries, includes the distribution of food to families in the hopes of staying the increasing number of people – especially children – dealing with malnutrition. It also includes cash grants and insurance to help provide other food for livestock, and also to pay them to replace those animals who also die as a result of food shortages.

As for specific plans, in Ethiopia the World Food Programme is targeting aid for a total of 3.3 million, or 59% of the total population. That number includes 850,000 women and children who are considered at highest risk. A shipment of grain from Ukraine may aid in providing supplies to this area.

The WFP is seeking to raise its support in Kenya for up to 535,000 people currently dealing with drought conditions. That is a jump from 108,000 it dealt with during the first six months of this year. The agency is also targeting support for 210,000 malnourished children and 105,000 pregnant and/or breastfeeding mothers in 15 of the counties most affected by the drought there.

In Somalia, specific plans include providing emergency food supplies for as many as 4.5 million just in the next few months. It has also raised goals for its malnutrition assistance activities in the country. It hopes to be able to provide nutrition support for 444,000 mothers and their young children through this plan.

“People here have been waiting years for rain - but they cannot wait any longer for life-saving food assistance. The world needs to act now to protect the most vulnerable communities from the threat of widespread famine in the Horn of Africa,” said UN WFP Executive Director Beasley in a statement about the situation on August 19. “There is still no end in sight to this drought crisis, so we must get the resources needed to save lives and stop people plunging into catastrophic levels of hunger and starvation.”

Beyond support simply to keep people alive, what is even more badly needed in the region is expert assistance in how to transform the nature of the food supply and the people’s use of water. Changing what is being grown to more heat- and drought-resistant crops, implementing water recycling programs on a mass scale, changing methods for wastewater treatment, and cutting back on dependence on livestock, which use a disproportionate share of the precious water available, are all part of a range of solutions which could be considered. This drought, like others in the world, shows no signs of letting up, and just plowing more food from other regions into places like this is not enough to save the people for the long term.

What will ensure our survival is enclosed circular systems that emulate nature and recycle waste and water, such as in the model habitat at Tataouine Community and Research Center under construction in Arizona by Climate Survival Solutions. This circular system converts waste into energy and nutrients and then uses those nutrients to grow algae and food crops. Pure, revitalized water and nourishing food are continually produced in a carbon neutral or negative system.

Constructing and operating such a system does require some capital and considerable technical expertise, but it is doable and is far less expensive than failing legacy food production systems, and it will help ensure our survival.