China Scrambles to Save Water, Crops, and Power as It Issues Year's First Major Drought Alert

The world’s largest emitter of greenhouse gases is now reaping the consequences of that, as it declares the first major drought emergency warning of the summer. Every aspect of Chinese life is about to get more difficult in the roughly half of the country affected. 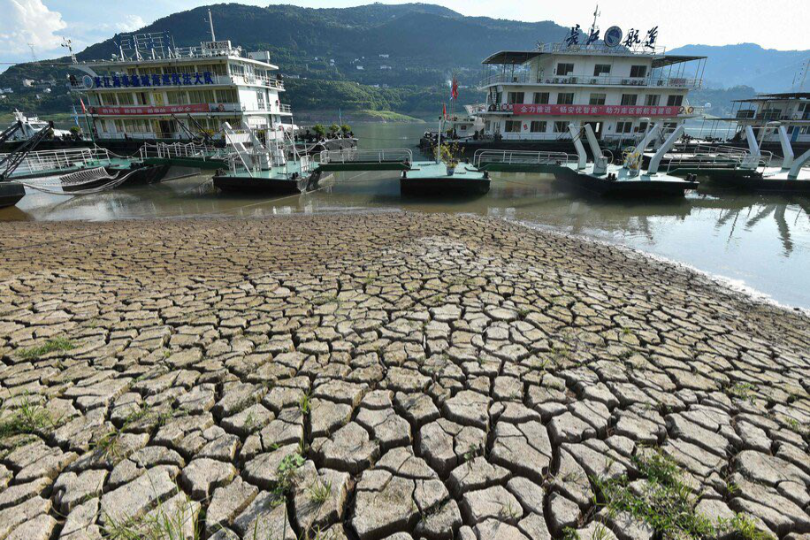 Drought in China in the summer of 2022 has drastically reduced water levels in the important Yangtze River. Boats have run aground, causing shipping issues, and agricultural regions are drying up. Photo: Peter Dynes, via Twitter

The People’s Republic of China (PRC) issued a “yellow alert” regarding the drought late on August 18.

The alert covers a broad swath of the nation, from Shanghai and the important Yangtze River delta in the Jiangxi province, to Sichuan in the important southwestern agricultural region of Chongqing.

Rainfall shortages and heat waves have combined this summer to create the most destructive drought in recent history.

Chongqing itself has recorded a 60% drop in rain compared to that in normal summers. That has robbed agricultural lands in the area of moisture needed just to keep the land pliable.

The Poyang lake, the largest freshwater lake in China and located in Jjiangxi Province, is normally fed by the Gan, Xin, and Xiu rivers, which in turn connect to the important Yangtze river via land channels. This year the drought there has shrunk it to just one-fourth of its normal size.

According to news reports from state-run agencies in China, that lake, the rivers which provide water to it, and the Yangtze it supplies are far from alone. Estimates are that 66 rivers within 34 counties in China’s southwest have dried up nearly completely.

Feeding the drought is also an intense heat bubble which has hovered over China’s southwest for much of the summer to date.

On August 19, the Chonggqing area was on record with six of the nation’s ten hottest cities. Bishan’s residents were already suffering from temperatures of 39° C (102° F), and Shanghai was climbing to 37° C (98° F).

The heat wave caused the country’s National Meteorological Center to declare another high temperature red alert yesterday. That represents the thirtieth day in a row of such alerts for the area.

The agency also said in its daily bulletin that some 4.5 million square kilometers (1.7 million square miles) had been dealing with temperatures of 35° C (95° F) since a month ago. That works out to almost half of China’s entire total surface area.

The NMC also said over 200 weather stations had reported breaking temperature records during the same period.

The heat has been so intense that roofs have melted in some areas, and the tar underneath roofing materials has dissolved and even evaporated in some areas. It has also caused roads to erupt and break apart in Shanghai and Jiangxi provinces

It is the worst such heat wave in 60 years, China says.

The consequences of the high heat and drought are taking their toll in multiple ways.

Wildfires in the southwestern mountains and forests have sparked and spread out of control, forcing use of precious water to keep them in check. Heat stroke has also downed many firefighters trying to fight the blazes.

In the district of Fuling, a gas district has had to shut off its normal supplies because of what it called “serious safety hazards” tied to expansion within the pipe structures.

The agricultural ministry in this part of China has launched teams into the area to determine how to protect crops and prevent further losses beyond what has already happened. Among tactics they are considering is the expansion of planting now, in anticipation of higher percentage losses when the autumn harvests take place.

As water reservoirs have drained and river water levels plummeted this summer, hydroelectric power plants depending on them have now had to deal with water levels around half normal, forcing power cutbacks.

The lack of water has also just forced China to take the unprecedented step of ordering microchip factories and electric vehicle metal processing plants to shut down for at least six days. Companies ranging from domestic electronics giant Foxconn to U.S.-based Intel corporation have also been caught by the shortage of power and lack of water for cooling and cleaning in the semiconductor fab-making industry.

Supplies of everything from lithium used in batteries to polysilicon and aluminum will cease in the region during that time.  The shutdowns will also force layoffs. They will also have indirect impacts on auto suppliers such as Tesla, whose Chinese factories depend on those supplies.

As air conditioning use has surged, the power grids have been pushed to the breaking point. Governmental officials have taken the unusual steps of asking the population to raise thermostats to 26° C (79° F) to conserve power. They are also asking office building management to stop using elevators in some places for the same reason.

The PRC’s water resources ministry is also beginning to put in place mandatory water use quotas. It is putting in place means to quickly move resources from one place to another, as well as setting up the equivalent of “water cache” reserves which can be accessed in the event of emergencies.

Between the challenges the drought has caused to crops, in forested regions due to wildfires, electric power cutbacks, shuttered factories, and human health, China’s emergency ministry estimates the drought has so far been directly responsible for financial losses to the economy of 2.73 billion yuan (U.S. $400 million). It also says at least 5.5 million people have been affected. Not mentioned is the devastating impact on wildlife.

Those numbers will likely climb further for weeks to come. Even a projected easing of temperatures forecasters say should come by August 26 will do little to stop continued damage, at least not until rainfall resumes at near-normal levels.

China is itself continuing to make the climate crisis that is behind all this far worse. It is currently the single-largest emitter of greenhouse gases, with 10 million tons of carbon dioxide dumped into the air from all sources as of 2020. That is roughly 25% of all global CO2 emissions.

Much of that comes from coal-fired power plants. Wealthy China produces over half the world's power generated from cheap coal, via approximately 1,110 power plants as of this year. It continues to build even more coal-fired power plants, on the excuse that it must have them to keep its economy growing, even though there are far cleaner sources of energy available to them.

As China is finding out with the heat waves and drought this summer, its past recklessness in addressing the climate crisis is now taking payback.