A 23-year drought which has pushed water resources in the lower Colorado River to record lows has now forced the U.S. Bureau of Reclamation to declare the first “Tier 2” shortage in history. 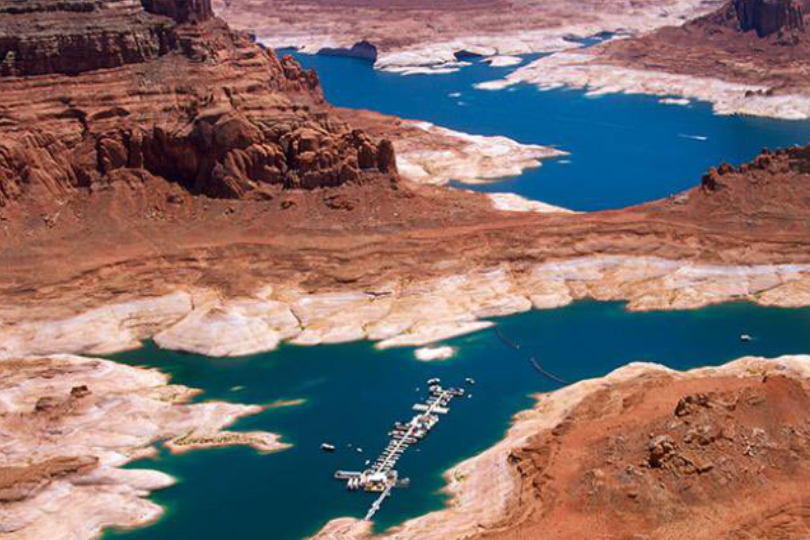 The record low water levels in the Colorado River and the reservoirs which help back it up are the reason for the additional drastic water cuts just announced by the Bureau of Reclamation on the American west and southwest. Photo: Armando Guzman, via Twitter

Under ordinary circumstances, the Colorado River serves as a principal water supply for 40 million people in seven western states, including Arizona, California, Colorado, Nevada, New Mexico, Utah, and Wyoming. The river also supports the needs of 30 Native American tribes, and parts of Mexico. Its 1,450 mile stretch also provides irrigation for 5 million acres of agricultural land. The river is also a vital ecosystem for fish, birds, and plants, with many among them endangered.

Its waters are sadly also used for fracking along key areas of its traverse from its origination point in the Rocky Mountains.

Unfortunately for all those served by this waterway, these are no ordinary times. Because of global heating due to the climate crisis and other conditions, the Colorado River basin is part of both a 23-year drought cycle and a 1200-year longer megadrought over the American west and southwest, both of which are expected only to get drier and hotter as the 21st century proceeds. 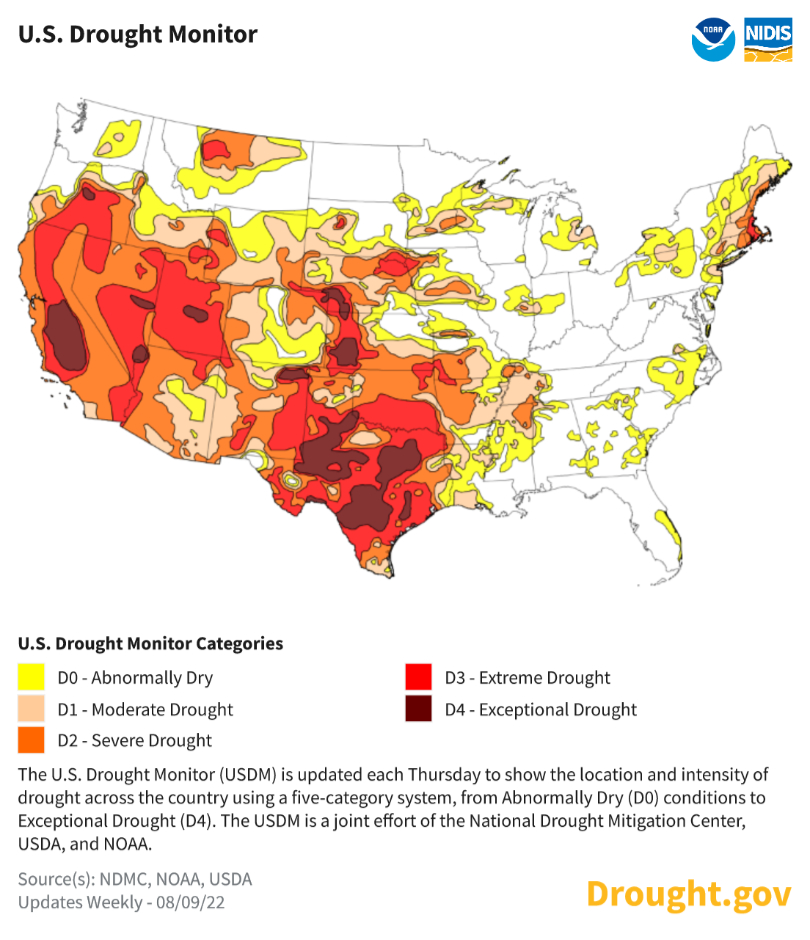 That drought pushed water levels to lows so severe that in April 2021, the Bureau of Reclamation warned it might have to cut back water allocations from the Colorado River. It would do so by restricting access to flows via its two reservoirs in Lake Mead and Lake Powell. Lake Mead, the largest artificial water reservoir in the U.S., straddles the states of Nevada and Arizona and is 24 miles east of Las Vegas. Lake Powell, the second-largest artificial water reservoir, is also on the Colorado River and spreads into Utah and Arizona.

As of August 2021, Lake Mead fell to only 35% of its total capacity, a net fall of 42% in the total amount of water present just 15 months earlier. It was the lowest it has been since the reservoir was built in 1935.

As that happened, the Bureau made good on its warning by declaring what it calls a Tier 1 shortage. That went into effect in January 2022. It shut off 512,000 acre-feet out of Arizona’s annual water intake of approximately 2.6 million acre-feet from the river; that works out to a 20% cutback of the state’s Colorado River allocations and about 8% of the total water consumed in the state. Nevada was forced to take 21,000 less acre-feet of water, amounting to a 7% drop from its normal allocation of 300,000 from the river. Mexico lost 80,000 acre-feet of water from the river as well as part of a law and treaty which allocates water to it and to the states in the U.S. Water hogs upstream got to continue wasting water, including the fracking industry.

One acre-foot of water is enough to support two households for a full year.

On March 3, 2022, just two months after the Tier 1 restrictions went into place, continued draws on the river and low rainfall pushed water levels at Lake Mead to 3,526 feet. That was just five feet above levels at which normal functions of the reservoir, including its use for hydroelectric power, could be damaged.

As expected, the drought extended further and was exacerbated by high temperature levels throughout the west and southwest. In June 2022, federal officials ordered those drawing water from the Colorado River to come up with a plan to cut water use by another 15% — equivalent to between 2 million and 4 million acre-feet per year and amounting to about one-third of all annual flow of water from the river. If the states could not come up with such a plan, they would face further cuts dictated at the national level. The deadline for submitting that plan was August 15.

The states failed to meet the deadline.

Yesterday the Bureau of Reclamation took its own action. It declared a Tier 2 water emergency for the Colorado River basin. It will force Arizona to deal with another 592,000 acre-feet of water reductions, for another one-fifth of their total usage from the river. Nevada is being ordered to take another 25,000 acre-feet (8%) of cuts, and Mexico an incremental 104,000 more acre-feet, or 7%.

California has no further restrictions on its use of Colorado River water under these new rules.

Nevada, which has already implemented recycling plans for almost all indoor-use water and which has begun forcing mandatory ripping up of lawns in major urban areas to conserve water, is expected to survive the cuts without severe challenges. The city of Las Vegas is prepared to lose more water from Lake Mead. It has already spent billions preparing for the drought it knew was coming and has stored enough water to last 8 years.

Mexico, which has its own deep drought and has been suffering from intense heat, is already engaged in water rationing in multiple states. Losing additional water from the river will put it under further stress and may render some regions uninhabitable.

Arizona is also in serious trouble, as water recycling is less common and will begin having to force its own forms of water recycling. Native American tribes in the state are understood in multiple areas to be better situated than state-administrated areas, as they took action to manage their own reservoirs and water use more aggressively by early last year. The Navajo nations has been getting billions in taxpayer handouts for its COVID and climate responses.

Commissioner M. Camille Calimlim Touton of the Bureau of Reclamation announced the additional water restrictions during a news conference yesterday.

“The system is approaching a tipping point, and without action we cannot protect the system and the millions of Americans who rely on this critical resource,” the commissioner said. “Protecting the system means protecting the people of the American West.”

In a separate statement, Assistant U.S. Secretary for Water and Science Tanya Trujillo called for further local actions to conserve water even as the new national restrictions were announced.

"Every sector in every state has a responsibility to ensure that water is used with maximum efficiency,” she said. “In order to avoid a catastrophic collapse of the Colorado River System and a future of uncertainty and conflict, water use in the basin must be reduced.”

State officials attempting to manage water supplies in their own areas expressed growing frustration and anger over the situation. The statements released yesterday suggest a larger confrontation is imminent as those needing to cut back the most demand more coordination actions.

Arizona Department of Water Resources Director Tom Buschatzke said it was “unacceptable” for Arizona to “continue to carry a disproportionate burden of reductions for the benefit of others who have not contributed.”

John Entsminger, general manager of Southern Nevada Water Authority, a region which has attempted to manage its situation but sees most of the other states as doing very little, was terse in a letter he wrote to Interior Secretary Deb Haaland this week.

“Through our collective inaction,” he wrote, “the federal government, the basin states and every water user on the Colorado River is complicit in allowing the situation to reach this point.”

In a separate public statement, Ensminger lashed out at the other parties involved in the Colorado River water distribution agreement. He said that emergency discussions in the last two months as states attempted to find a way to deliver the 15% water use cutback, to avoid more mandatory federal restrictions, had failed miserably. Those discussions, he said, have “produced exactly nothing in terms of meaningful collective action to help forestall the looming crisis.”

Activist groups like Food & Water Watch pointed to one arena which states and the federal government seem to have little interest in pursuing: cutting off the vast wasted water supplies being set aside for toxic fracking in regions such as California and Colorado.

"By switching to renewable energy sources like solar and wind, California could save 98% of the water currently needed for its fossil fuel production," said Food and Water Watch research director Amanda Starbuck. "And by transitioning away from industrial mega-dairies, thirsty crops like almonds and pistachios, and engaging in regenerative farming, California will gain enormous water savings that could serve small farmers and domestic households."

All that is going to be tough to administer politically especially with this being an election year. Post-election, with potentially even more Republican representatives and senators in office who are beholden to fossil fuel interests, the probability of shutting down uses of water for fracking and lucrative water-demanding crops will be even lower.

For the states parched beyond imagination by the mega-drought — and dependent on the Colorado River literally to “bail them out” from these impacts of the climate crisis, expect water wars between them — and demands to renegotiate the century-old river water allocation agreements — to escalate as 2023 date for implementing the full Tier 2 water cutbacks grows closer.

Bid Ocean's public benefit company, Climate Survival Solutions, is doing its part by designing and building a model climate-proof community in Arizona called Tataouine that will recycle 100% of water. Climate Survival Solutions will also be presenting some of its solutions at the upcoming International Conference on Drought and Climate Change (ICDCC 2022: XVI) to be held in Dubai, United Arab Emirates December 20-21, 2022.

"Surviving the aridification of the West is certainly doable but will require substantial change in the way we live. The easy solutions of giving up private outdoor swimming pools and green lawns won't be nearly enough. We will have to change the way we think about water, emulate nature and recycle it in circular systems — not pollute it and forget about it," said Climate Survival Solutions founder and CEO, Tim Loncarich.