A new study has concluded that global heating and temperature variations associated with it are holding back the economic growth of approximately one-fifth of the world. When all other climate factors are considered, the numbers are far worse. 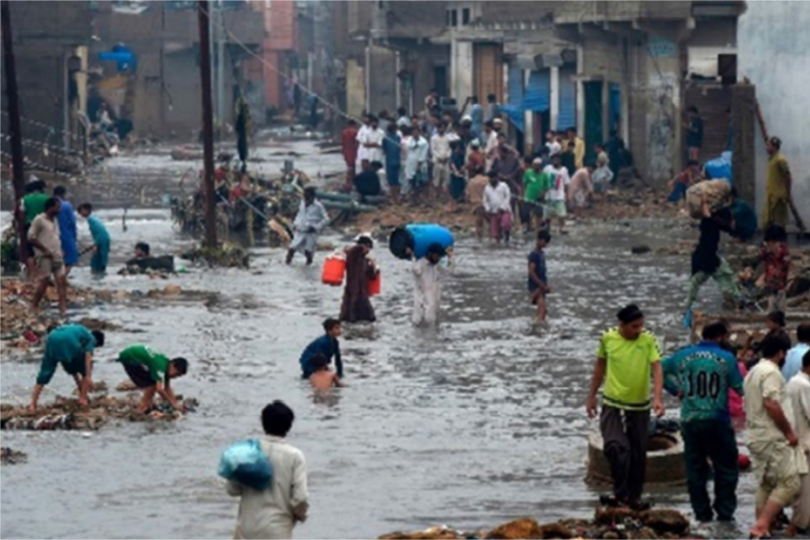 Temperature oscillations can trigger atmospheric effects which in turn lead to major flooding like this in Karachi, Pakistan in 2020. This is just one example of how climate changes can cause major economic damage to a region. Photo: World Meteorological Organization.

The research, led by the University of California, Davis, and with contributions from Italy’s European Institute on Economics and the Environment, addressed the impact of regular temperature “shocks” over periods of up to 10 years.

An example of the shocks studied in this work was the El Niño Southern Oscillation. That is a multi-year temperature warming cycle in the central and eastern Pacific Ocean, tied to atmospheric effects, which directly affects total rainfall and temperature effects in much of the world. In the past it has caused normally dry areas in Chile, Peru, Mexico, and the southwestern United States to experience high levels of rainfall and flooding. In other normally wet areas, such as the northeastern United States and the Brazilian Amazon rainfall, it can lead to years of extreme drought.

It should be emphasized that this was far from a comprehensive analysis of the economic impact of the climate crisis in general, which must incorporate considerations of long-term trends such as sea level rise, increasing strength and numbers of extreme weather events, and growing megadroughts which affect both crops and populations, among others. It does not include analysis of the growing secondary threats to economies as health suffers because of heat, vector-borne disease, and lack of access to adequate sanitation and clean water. Other issues, such as destruction of property and forests because of wildfires and the real costs of climate migration are also not fully considered.

Yet despite that, the study still represents a good start to the analysis, with high-level impacts from transient changes in heat and varying rainfall amounts providing primary guides for correlating climate impacts. El Niño, for example, is a good model to analyze these sorts of changes, because it has always existed and ocean warming related to the climate crisis has made some of the recent cycles more severe.

The researchers carried out their work via an empirical analysis of the real costs to economic productivity and Gross Domestic Product because of temperature variability and heat stress due to the climate crisis. They evaluated this not just from looking at the final GDP numbers and correlating them with temperature events. Instead they also examined the economic productivity determinants that support healthy GDP growth, and looked at how those are impacted by heat stress.

What they concluded is that many economies are affected by the ongoing wave of heating events over time, as a series of climate-related assaults on economic ecosystems take their toll over time. These are especially serious not just because of their magnitude but also because many nations lack the resources to recover fully enough from one event before the next one begins.

They also concluded that in the 170 countries they examined, what may seem like short-term temperature impacts of the climate crisis have longer-lasting impacts on GDP in at least 22%. This is even more serious in countries which lack the financial and other resources to recover from the waves over time.

Bernardo Bastien-Olvera, a Ph.D. candidate at UC Davis and the lead author for the study, summarized their findings.

“Our results suggest that many countries are likely experiencing persistent temperature effects,” he said in an interview and his team’s findings were published. “This contradicts models that calculate metrics like the social cost of carbon, which mostly assume temporary temperature impacts on GDP. Our research adds to the evidence suggesting that impacts are far more uncertain and potentially larger than previously thought.”

The study found the highest level of correlation between absolute temperatures and GDP performance. From the data presented in the paper, the 22% impact number also appears to correlate with mean temperature increases of just 1° C over time, with higher fluctuations than that causing even more productivity damage.

One was that there were “no systematic differences in the estimated effects between rich and poor countries” in the results, suggesting that full recovery from temporary drastic temperatures shifts is still beyond the means of even the wealthiest of nations to withstand.

A second was that, using the World Bank dataset, the GDP dataset showing the highest level of economic impact at 22%, only 15% — roughly one-sixth — of all countries were ever able to fully recover from the temperature variations. Other datasets, such as the Maddison Project and Barro-Ursua GDP analyses, showed lower economic impacts from temperature changes over a decade and more, at 19% and 8%, respectively. They indicated higher recovery rates than the World Bank data, at 21% and 34%, respectively. But in all cases the overall conclusion was that most countries — two-thirds of those surveyed even in the Barro-Ursua data which showed the least GDP impact — had long-term damage to their economies which they never recovered from. The authors speculated that this may be because of “adaptation or coping dynamics [or] competing growth” effects, among other reasons.

The conclusion of all was that whether economies were big or small, wealthy or poor, or the temperature impacts less severe, the global economy is taking a long-term beating just from heat-related waves of climate stress over time. When the full impact of all such stresses is ultimately analyzed in a manner like what these authors have done, what will without question be revealed is an even bigger shock. It will be that the true cost of moving from a stable climate with seasonal variations, to the accelerated waves of change from all aspects of the climate crisis, is of a much higher order of magnitude even now than anyone has previously calculated.