Water levels in the Rhine, one of the most important rivers in Germany for shipments by barge, have dropped to record low levels as Europe's drought deepens. 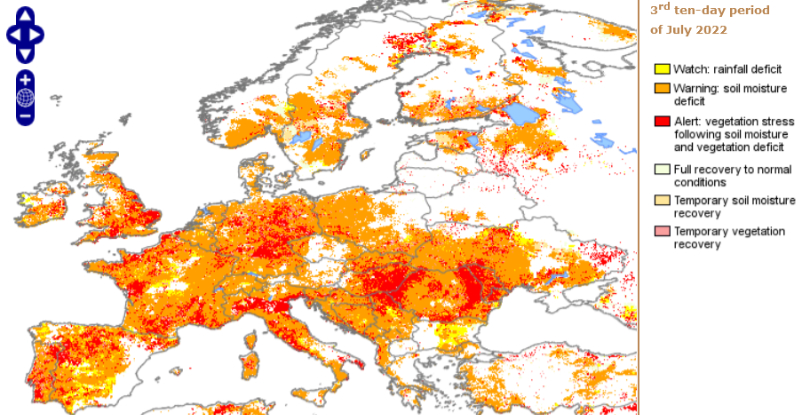 Map of drought in Europe as of late July 2022. An estimated 47% of the region is suffering from major drought conditions. Photo: Copernicus Emergency Management Service

The climate-crisis-driven combination of high temperatures and low rainfall across all of Europe which began this spring and has mostly only worsened since has claimed another victim: the Rhine River.

The Rhine is considered the most economically important of Germany’s inland waterways.

Within Germany, it is responsible for roughly 80% of the nation’s water shipping traffic, mostly carried by barges, travels across this route. It is the primary means for most agricultural shipments including wheat and other items such as coal and oil. Within that nation’s borders, commercial vessels on the Rhine are critical means of delivering goods to such major cities as Cologne, Dusseldorf, Strasborg, and Basel. It is also a primary method for shipping goods out of the country to major international ports such as Rotterdam in the Netherlands.

Some of Germany’s biggest companies, such as BASF, the largest chemical company in the world with 2021 revenues of over €78 billion (US $80 billion), has its headquarters in Ludwigshafen next to the Rhein River precisely because of its shipping utility. It also relies on the Rhein for most of its fossil fuel power supply deliveries and the use of its waters to cool factory energy-intense factory processes.

Thyssenkrupp, a € 40.5 billion (US $41.55 billion) conglomerate focusing on advanced technologies for production, green energy innovations such as hydrogen production and high-efficiency wind power components, and factory emissions control systems, has its administrative headquarters close to the Rhine as well, in Oberhausen.

Companies like these and more depend primarily on the Rhine to keep their supply chain inputs and shipments moving.

The problem for Germany, which has been suffering sluggish economic growth anyway, with just 0.2% expansion in its Gross Domestic Product in the first calendar quarter of 2022, is that waters in the Rhine are drying up in the intense heat after a long dry spell. 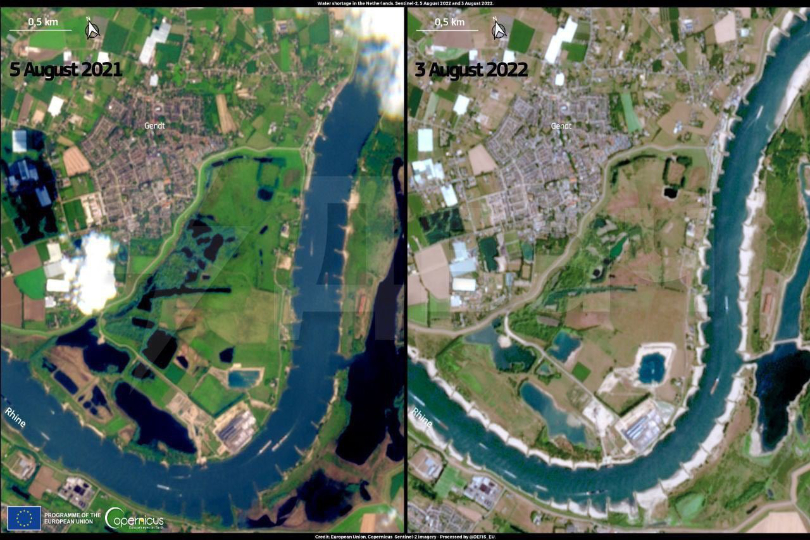 A comparison of satellite images of the Rhine, the left from August 2021 and the right from July 2022. Both were taken by satellite over Germany. Photo: Copernicus Emergency Management Service

At the waterline at Kaub, located close to the major industrial center of Frankfurt and at what is nominally the shallowest part of the river, on August 10 water levels dipped to 71 centimeters (28 inches). That is already a very low number, for a river which normally would have been 200 cm (79 inches) deep at this point. As of yesterday, that water level had dropped further, to just 40 centimeters (15.8 inches).

The situation is also about to get even worse. In a daily bulletin just released by Germany’s Federal Water Shipping Administration, water levels by Kaub are expected to fall another 10 to 15 cm (3.9 to 5.9 inches) in the next few days. And although there is expected to be some rain within the next few weeks, the impact of that on rising water levels will be only temporary, according to the Federal Institute of Hydrology’s latest six-week forecast for the country. It says water levels will continue to decline during that period. The institute also said that even with some additional rain later, the Rhine waterline will stay below the critical benchmark for shipping for some time.

What that means to the region is that many shipping companies which normally transport goods via the Rhine have halted their transits, to avoid running aground along the way. Others have begun loading the vessels with less goods than normal, so they ride higher in the water.

Coming with that is a scramble to find alternative ways to ship goods through the area. That generally means to shift to truck transports or rail, but the costs are higher and the capacity per vehicle or rail car is far lower. As an example, while a single shipping vessel could carry 1,000 tons of wheat, it could take 40 trucks to transport the equivalent amount of goods.

Cost increases are not the only problem. Since almost every shipper will be looking for alternatives to river-going transport, trucks and rail cars are going to be in high demand. Prices to ship by those routes will surge, even for shippers lucky enough to snag those methods as another means of transporting goods. That means disrupted supplies of parts, subassemblies, chemicals, and fossil fuels into the factories along the Rhein, and a slowdown of shipments out of the factories and from agricultural goods suppliers along the river.

The result could mean an even more dramatic economic slowdown in Germany, which also happens to be the single-biggest European country in terms of GDP. In 2021 it contributed €3.57 trillion (US $3.66 trillion) to the global economy. The second biggest economic engine in Europe is the United Kingdom, but it falls a distant second to Germany. In 2021, its annual GDP was €2.5 trillion (US $2.57 trillion). The slowdown will be triggered as plants are forced to shut down temporarily or produce at lower volumes and as higher shipping costs cause prices to rise.

In a country already experiencing annualized inflation of 7.5% in July, with food and fossil fuel supplies driving the rise, and with the German govt. and Russia currently throttling the supply of natural gas into the country, the further damage to the economy because of a drying Rhine could be serious.

The Rhine is not the only major river in Europe affected by the drought of 2022. The Loire River in France and the Po in Italy are also drying up in many locations along their routes, with implications for agricultural irrigation, shipping, and electrical power in those countries. The Rhine just currently happens to be the one with the most significant economic drought impacts in Europe at this time.