A new study has concluded that the climate crisis is making us sicker, as over 1,000 “unique pathways” for the spread and incubation of illness -- made worse by global heating and extreme weather -- encompass the planet. 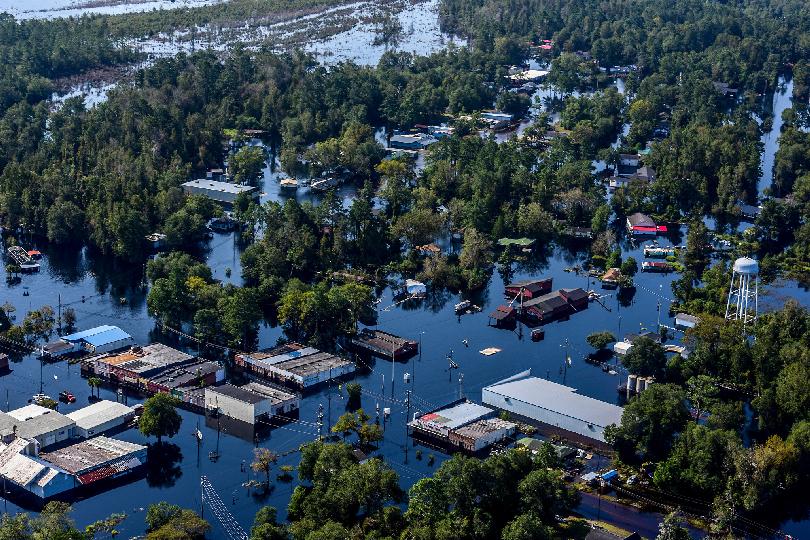 Aerial view of the flooding aftermath of Hurricane and then Tropical Storm Florence in South Carolina as of September 21, 2018. Stagnant water after extreme weather events such as these are just one of the ways pathogens spread further as a result of the climate crisis. Photo: South Carolina Air National Guard

The research was conducted at the University of Hawaii at Manoa by lead author Camilo Mora and eleven others, from CSS, Department of Earth Sciences in the School of Ocean and Earth Science and Technology, Marine Biology Graduate Program in the School of Life Sciences, Department of Natural Resources and Environmental Management in the College of Tropical Agriculture and Human Resources, and Hawaii Institute of Marine Biology in SOEST. It represents a first-of-its-kind analysis of how diseases which can infect, cripple, and kill humans are becoming more threatening to us all in our already much hotter world.

The researchers began their work first by identifying the top 375 human illnesses which ae caused by pathogens such as bacteria and viruses, and spread animals, plants, fungi, and more. They categorized each of those illnesses by the means of transmission for each, including by airborne spread, physical contact with the pathogen including contaminated water and food, and vector-borne (such as Lyme disease from ticks, and malaria, zika, and dengue fever from mosquitoes), among others.

Then they examined how the climate crisis directly enables the spread and virulence of each of those diseases. Hotter weather on its own is already allowing for pathogen carriers such as insects to spread over larger portions of the planet than ever before. Global heating also brings with it increased evaporation of freshwater and oceans alike, increasing moisture content in the air; this allows for many pathogens to survive, even thrive, and propagate for longer distances in airborne streams than ever before. Melting glaciers in regions such as the Himalayas and thawing permafrost in areas of the world which have never seen such high temperatures are also releasing viruses and bacteria which had been in suspension and/or are now growing within the warming wet masses of previously frozen organic matter.

Extreme weather events such as super cyclones, hurricanes, flooding, and the growing risk of atmospheric rivers which ride high on stratospheric currents, such as which devastated British Columbia in November 2021, are also enabling pathogens of all kinds to spread further and faster than ever before.

As carbon dioxide levels are absorbed in the oceans at higher levels, that too reduces oxygen concentration and allows for diseases which would otherwise have been restricted in growth to propagate.

Warming oceans have also been demonstrated to increase the presence of illnesses such as vibriosis. Those are bacterial infections tied to individuals swimming in infected waters near coastlines, or by eating contaminated seafood which is harvested from the same contaminated shores.

The researchers also noted that as forests diminish both because of climate-related issues and by direct human damages, changes in land mass respiration, evapotranspiration, and changes in albedo (the amount of sun reflected by the Earth's surface back into the atmosphere), also provide for more efficient disease transmission.

Secondary effects of the climate crisis such as wildfires were also cited as a cause of global pathogen spread.

The work also pointed out that decreased nutrient levels in food crops as a result of higher CO2 concentrations and higher temperatures contributes to increase global malnutrition. They concluded that this "can directly cause human malnutrition, helping to explain the increased risk of food-deprived populations to disease outbreaks (for example, Cryptosporidium, measles, and cholera)".

The research further noted that climate change can force individuals "into unsafe situations [which] facilitated the risk of disease outbreaks". As an example, the study said that increased drought caused people to consume unsafe drinking water, which brings with it diarrhea, cholera, and dysentery. With less water overall, poor sanitation conditions also become more common. That in turn brings with it more cases of cholera, trachoma, E. coli, giardia, salmonella, scabies, conjunctivitis, scabies, and typhoid fever.

In all, the study identified over one thousand epidemiological pathways by which increasing climate risks directly contributed to pathogenic disease. The scientists carried out this work by examining over 77,000 separate scientific studies to gather their data.

What they found was that 58% of the 375 known human pathogenic diseases have been affected in some way by the increased presence of climate hazards on the planet.

They noted that higher temperatures alone were allowing 160 of the diseases surveyed to spread further and infect more people. Extreme weather bringing more moisture to more places was cited as having an impact on 122 pathogens. Flooding alone, via spreading of disease and the increasing presence of stagnant waters, is driving the growth of 121 illnesses, with drought affecting 81, storms 71, changes in land coverage by forests 61, ocean warming and acidification 43, wildfires 21, the increasing presence of heat waves 20, and sea level rise on its own making 10 disease categories worse.

The study did not include consideration of climate migration, a direct consequence of human homelands becoming uninhabitable and societies needing to travel just to survive, on the spread of some diseases. That is certain to have further impact on the global spread of disease as populations travel and aggregate in new locations.

The study was also unable to quantify the impact of higher temperatures forcing people indoors. By congregating in smaller spaces, people will transmit more illnesses to each other.

Urban congestion, a phenomenon indirectly related to the climate crisis as agricultural communities fail due to drought and heat, will have similar impacts on the spread of disease.

The study also found that 63 of the 375 pathogens were rendered less damaging to human life as a direct consequence of the climate crisis in one way or another.

The devastating conclusion of the study is that climate change is bringing people and pathogens closer together, and it is doing so with climate crisis related transformations of the planet which help those pathogens thrive and spread like never before.

"Given the extensive and pervasive consequences of the COVID 19 pandemic, it was truly scary to discover the massive health vulnerability resulting as a consequence of greenhouse gas emissions," said lead author of the study Camilo Mora, a geography professor in the College of Social Sciences (CSS). "There are just too many diseases, and pathways of transmission, for us to think that we can truly adapt to climate change. It highlights the urgent need to reduce greenhouse gas emissions globally."

The full paper describing this important research, “Over half of known human pathogenic diseases can be aggravated by climate change,” by Camila Mora, et. al., was published in the August 8, 2022, issue of Nature Climate Change.