Drought in Paraguay Becomes a Major Threat to the Economy

Continuing drought in the Rio de la Plata basin in Paraguay is threatening trade which depends on its rivers for most of the country's export and import shipping. This is yet another casualty of the deepening global climate crisis. 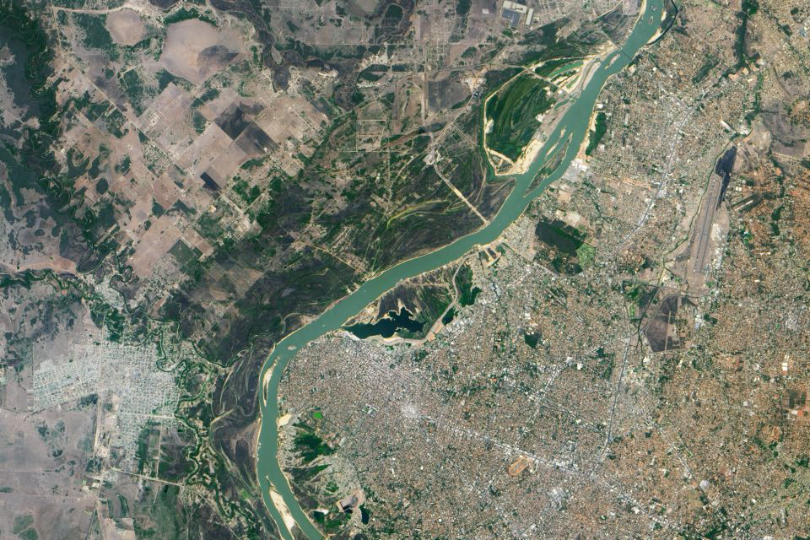 Even as long ago as November 2020, the important Paraguay River was already at dangerously low water levels because of the third year of a devastating drought. Photo: NASA Earth Observatory

In September 2021, a record-setting four-year drought in the Rio de la Plata region had already brought water levels in the important Paraguay River to near its lowest point ever. At that time the water levels were so low that shipping barges were forced to carry between 40% and 50% less total loads compared to normal, to avoid running aground.

Now ten months later, the country is into the fifth year of the drought. The lack of rainfall is attributed to extreme heat and changing meteorological conditions created by the climate crisis, as well as the cyclical ocean phenomena known as La Niña.

This time both the Paraguay and Parana rivers are suffering. As reported by Guillermo Ehrecke of the Center of River and Maritime Shipowners of Paraguay (Cafym), even though the river levels are not yet at the worst they are expected to be in just a few months, the cargo ships have been forced to carry 20% less cargo than normal this year as well.

The rivers and those ships are the primary means of economic transport in the country. The cargo vessels export grain and other agricultural products, and import goods such as household appliances, electronics, and industrial equipment. 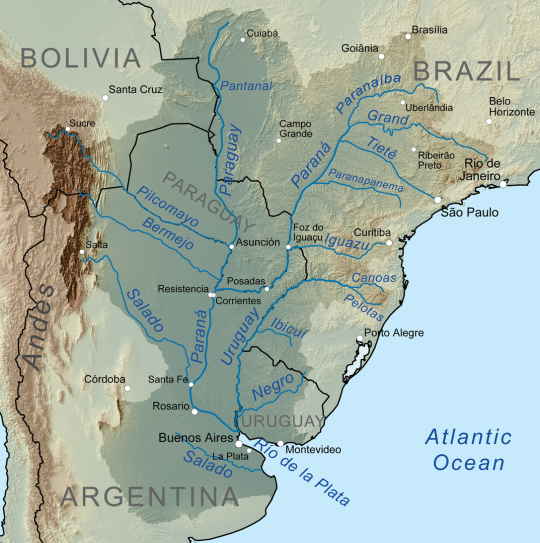 Map of the Rio de la Plata basin, showing all major rivers and tributaries within Paraguay, Note the importance of the Paraguay and Parana rivers as parts of that network. Photo: Kmusser, CC

The drought has already created one serious problem for the economy of the region by causing soybean production for the 2021-2022 season to drop by around 70% compared to normal. Now the river levels could jeopardize virtually all trade for the South American nation, just as the badly needed 2022-2023 harvest season reaches its peak.

“If these rains do not appear as they did in 2020 and part of 2021, we are going to have an extreme low again,” said Cafym’s Ehrecke about what the future may have in store for the country.

That in turn will damage any hope Paraguay may have for recovering from last season’s agricultural collapse.

Right now, the country is highly dependent on a narrow transportation period between August and September, in order to meet grain and other item export demands.

“What worries us is the trend, because we did not finish recovering and a downward trend begins again and we have to see how this continues when the time comes for the new harvest in January, February,” commented Hugo Pastore, of the Paraguayan Chamber of Exporters and Traders of Grains and Oilseeds.

One possible short-term fix for providing better passage along the Paraguay is dredging it out, possibly deeper and wider than in past years, when all that the country was concerned about was cleaning out silt deposits which runoff from lands nearby.  Unfortunately, though there is a feasibility study the Jan De Nul corporation has proposed for doing just that, it is expensive and would take some time to implement. It would clear some drainage within the Paraguay-Paraná waterway, from Asunción to the Apa river, but is a major undertaking which would extend well past this year’s harvest season.

It also would require an investment of U.S. $110.2 million, something the government seems only prepared to do on a public/private partnership basis. So even getting the money for the project is going to take some time.

In Paraguay, at least, the county is taking its own climate-related issues seriously as it prepares for how to survive the drought ahead. In neighboring Brazil, where that country’s climate-denying government is enabling unprecedented deforestation levels, the damage to the Amazon rainforest and surrounding areas is mounting daily and is at record levels this year. It has already caused irreparable damage and has converted what was once a net carbon absorbing region into a net carbon emitting one.