How Humidity Plays into Our Ability to Survive Higher Temperatures

As heat waves spread throughout the U.S. west and southwest, mainland Europe and the United Kingdom, the reporting focus is often just on high temperatures as a measure of at what point people simply cannot survive. A new study reveals that the combination of high humidity and heat can render our regions unlivable at much lower temperatures than had been previously understood. 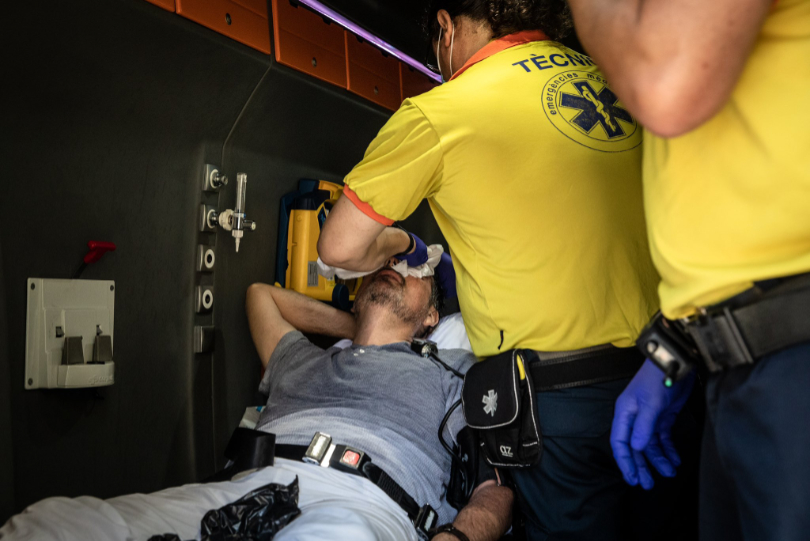 A patient is treated for heat stress in an ambulance in Barcelona, Spain on July 18, 2022. Photo: Angel Garcia, via Twitter

The key to what determines the human body’s capability to withstand high temperatures is a function of two factors. One is the absolute ability of the body to withstand heat, with failure points differing slightly based on certain major organs in the body such as the brain and the heart. The other is our ability to cool ourselves.

Our bodies cool themselves by sweating. Sweating has two aspects to it as well: perspiration (which requires us to stay hydrated especially at times of high temperatures) and evaporation (the process by which our hot sweat is transported away from our bodies and into the air).

This is where what is known as the “wet-bulb temperature” comes in. That represents a combination of absolute temperature and how much humidity is present. At higher ambient humidity levels, evaporation of sweat is a slower process. Without that evaporation, we stay hotter for longer, and inherently hotter over time as more sweat pours out without being completely removed. With higher humidity comes higher danger to us than just from temperature rise alone.

As the body grows warmer, the heart automatically starts pumping harder and faster, to move blood through the body more quickly. As more blood moves through, it can exhaust more heat out through the skin, with sweating once again providing the cooling mechanism. The role of the heart in this is a major factor in the ability to survive continued levels of high heat

That is why weather reporting often refers to absolute temperatures and what are sometimes called “real feel” numbers are conveyed.

In both cases that safety limit was determined by estimating people’s ability to maintain a stable core body temperature at given combinations of ambient air temperatures and humidity.

What most who have heard these numbers do not realize is that these calculations were just estimates and had not been evaluated scientifically on real people to determine precisely when our bodies hit the danger levels.

A recent study, carried out in a controlled environment at Penn State University’s Noll Laboratory on how heat stress affects the human body, has determined we are in trouble at much lower absolute temperature levels than the 2010 estimates suggested.

In the experiment, everyone involved swallowed a pill with embedded telemetry to report on the body’s core temperature. They were put in an environment designed to simulate what typical people do during the day, including work, relaxation, cooking, and eating.

The experimenters then slowly made changes to humidity and temperature in the environment, then monitored what the telemetry pill reported back. 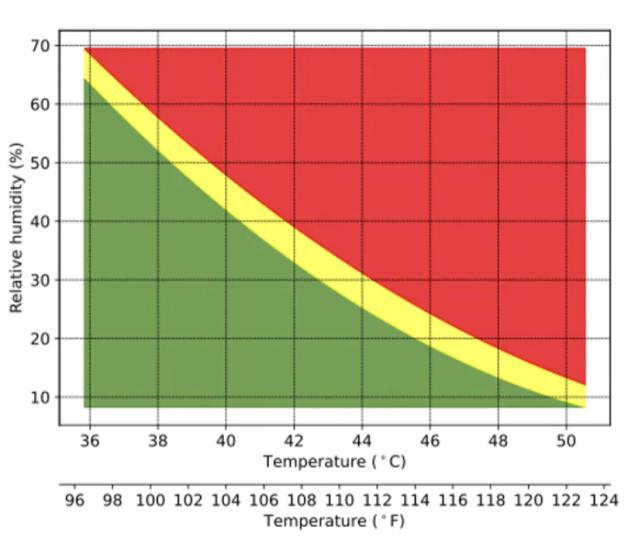 This chart shows the relationship between different combinations of air temperature and relative humidity and their impact on the ability of young men and women to survive those combinations when they are at low exertion levels. The yellow band, separating the safe region (in green) and the unsafe region (in red) at which the human body cannot adequately regulate body core temperatures, is the rough average maximum environmentally safe limit for young men and women. Photo: W Larry Kenney, CC

That is far lower than the 2010 study results concluded.

More seriously, the 38° C (100° F) temperatures with 60% humidity are now more common than ever and at higher latitudes than in the past. As an example, during the recent heat wave which spread across Pakistan from May to June 2022, maximum wet-bulb temperatures of 33.6° C (92.5° F) were recorded. Similar measurements in Delhi, India, during the same period were even hotter.

These studies were also only conducted on healthy young men and women. The study is now broadening to evaluate the maximum safety wet-bulb temperatures for the elderly, whose hearts and other body systems are nowhere near as resilient as for the young.

Though not part of the current study, it should be clear that human beings are not the only creatures on the planet who are having tougher times withstanding current prolonged heat and humidity levels. Though more studies on other species are needed to determine how close they are to mass deaths and extinction, there is no question that it is already much hotter for us all than we previously thought.