As high temperatures in the United Kingdom lead to deaths and wildfires, shutdowns of two major rail lines are getting a few people's attention, but is anyone really hearing the wake-up call and waking the hell up? 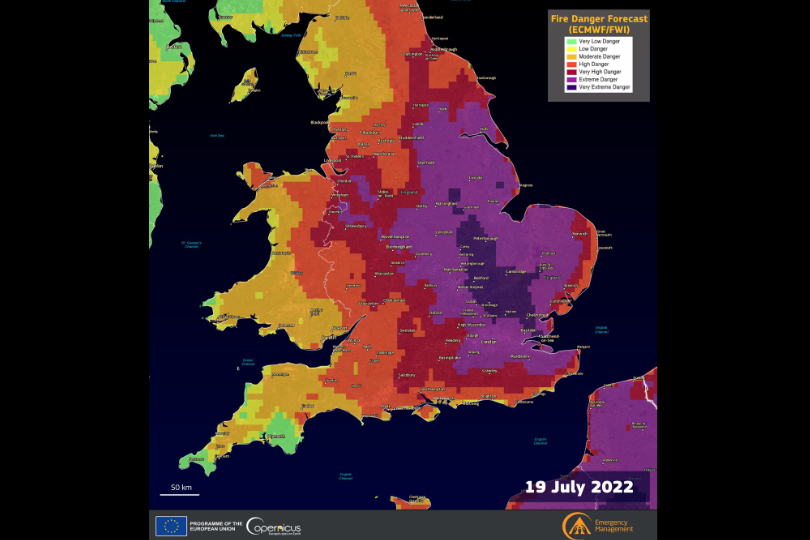 Fire danger forecast in the United Kingdom for July 19, 2022, as temperatures passed 40° C (104° F) over wide areas for the first time in modern.. Photo: Copernicus EMS

Air temperatures, driven by a high-pressure zone, rose to close to 40° C (104° F) throughout much of central England earlier this week. New heat records are being broken daily even now. In a society with most homes lacking air conditioning and even basic insulation, the heat is suffocating and life-threatening. Citizens are being advised to stay home if possible, avoid travel, and keep cool.

That is bad. But it was what was about to happen to some of the more important railways in the UK which made what was happening even more frightening.

On July 18, temperatures measured by Network Rail at the railway track level in Suffolk, Britain, set a record of 62° C (144° F).

As of 5 PM local time on July 19, the Suffolk Fire and Rescue Service said it had sent out crews to fight 63 separate fires which were a direct result of the heat.

As temperatures at the ground level formed a ground-level oven for the railways in Suffolk, tracks on multiple train lines buckled from the heat while overhead electrical lines broke.

Some electrical power lines, such as those in the Birmingham, Carlisle, and Rugby areas, snapped and caused trains to shut down. Emergency evacuations were needed to get people out, so they would not bake in the stalled rail cars.

Several 25,000-volt electrical overhead cables broke in Harrow, in northwest London, and set a roaring blaze alight in a fire located close to the rail lines. Even before that fire, Avanti’s intercity management had directed trains in the area’s west coast mainline to run at slower speeds to avoid the rapid transit over the rails to heat them even further. After the fire, all trains running out of London Euston were eventually halted, as a safety factor, while the railways figured out what to do.

Multiple railway track fires also broke out in central England as of July 19, in most cases caused by sparks or complete line breakage of other electrical conduits.

By the end of the day on July 19, track temperatures running close to Suffolk’s 62° C (144° F) forced the Midland mainline to Derby and the East Coast mainline to Leeds to shut down as well.

As of yesterday, though repair work was ongoing, fires near the tracks forced the East Coast mainline to remain halted between London and Peterborough. Great Northern Services heading northwards from London, and LNER services out of Thameslink remained down.

Other line and track failures caused intermittent disruptions or route cancellations in a number of CrossCountry, Trans Pennine, Northern, and Transport for Wales services.

Network Rail, the operator of many of these services, continued to direct passengers not to travel unless it was critical to do so, regardless of whether the trains were expected to run.

“Network Rail teams are continuing to work tirelessly to make the repairs so we can get services back up and running for passengers but there is still disruption to services throughout the day,” the company said in a statement late yesterday.

Railways were of course not the only major infrastructure category affected by the extreme heat. Luton Airport, located 28 miles (45 km) north of central London, had to shut down completely on July 18 when asphalt runways melted.

Multiple highways and city roads throughout the peak heat zones also cracked open and melted, forcing lane closures and some long-term closures until they can be repaired.

In a parallel move, Network Rail said it was forming a “resilience task force” to help minimize such disruptions in the future, even as higher temperatures are about to become far more common as global heating soars. With the entire system — from track layout to electrical wires and even to the choice of the alloys used on the tracks — designed to operate at much lower temperatures, however, it is unlikely that the taskforce could prevent disruptions like what happened this week from occurring again any time soon. It will require a major rethink of how the system will need to operate in a world where temperatures could reach 70° C (158° F) just a few years from now and much of the planet will be uninhabitable.

While the warning signals continue to blare, most of humanity just keeps its head in the sand and ignores the future that is knocking on their door. No one is discussing what the runaway catastrophic climate change that is upon really means. Academia and media keep muttering the 1.5° C IPCC fraud and delusion that putting up more solar panels, wind generators and buying electric cars will somehow save us and for most, life goes on for another day with very few thinking of the future.

The reality is that we have radically altered our planet and damaged its essential life support systems. By altering the atmosphere to contain vastly more greenhouse gases and destroying most of the planet's forests and other ecosystems, we really are causing the most rapid extinction of life in Earth's history and that may of course lead to our own extinction if we don't wake the hell up.

If you don't understand this perhaps the video below will help:

The video was produced by Climate Survival Solutions.