The National Institute of Space Research (INPE) of Brazil just released data showing deforestation of the Brazilian Amazon Rainforest for the first six months of 2022 set a record. 3,987 square kilometers (1539 square miles) were cut down, bulldozed, or burned, all to support greed in industry and government. 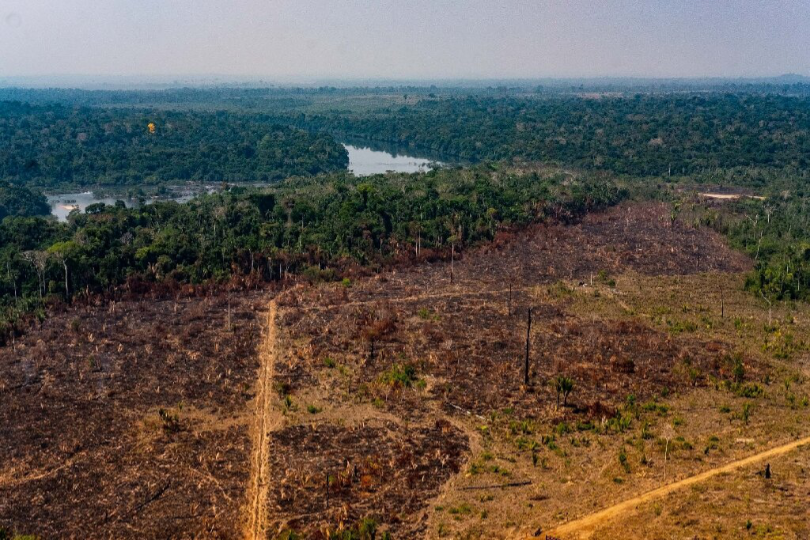 The rate of destruction of the Amazon Rainforest is continuing at record rates for the first six months of 2022. Photo: Linda J. Crane, via Twitter

The destruction, backed by the government of President Jair Bolsonaro, comes at a time when rewarding those who back him in the agricultural, mining, and cattle-raising industries is critical, as he faces reelection in the country this October 2. In doing so, he has demonstrated once again that lining his administration’s pockets as well as those of industries which have forced out and poisoned – via mercury-laced mining tailings and other toxic chemicals) – the indigenous is more important than the health of the Amazon rainforest ecosystem.

INPE reports in its release that just in the month of June the country has allowed 1,120 square kilometers of 452 square miles. That is a 5.5% increase over last year’s numbers.

The deforestation is happening faster than ever since accurate measurements of the destruction started in 2016. Those measurements, which were in part based on what is known as the Legal Amazon Deforestation Detection System in Real Time (DETER), use satellites with the original intent of tracking violations in rainforest clearing. Now they have become the primary means of reporting on government-supported, though still almost all illegal, clearing of the land to make room for Brazilian beef production, soybean crops, illegal logging and wood trafficking, and more gold mines. The system is used to report monthly on damage to the forests.

A second reporting system, PRODES, is also involved, but it only provides annual deforestation summaries which run from the twelve-month period running from August to July.

It is estimated that 72% of unlicensed and illegal mining in the Amazon is made possible by the forest destruction. Those mines are some of the most destructive to the area’s rivers and freshwater that the Indigenous peoples’ use simply to live and to fish. The mercury and arsenic contamination will persist in the environment for millennia.

Virtually 99% of all the wood cut down from the forest and sold, both domestically and internationally, is also illegal.

Bolsonaro, who looks the other way intentionally when it comes to these illegal activities, justifies the destruction of the rainforest as an asset that belongs to the country and is there to be plundered as needed for short-term gain by a few people, regardless of the long-term negative consequences to everyone else.

The criminal Bolsonaro is also considered a supporter of another alarming trend, the increasing use of poisonous herbicides and pesticides to assist in the illegal clearing of the forests and what is left on the ground after they have fallen. A report released in January 2022 revealed the widespread application of chemicals such as the cancer-inducing glyphosate and 2,4-D chemicals, to accelerate the breakdown of vegetation on the ground and reduce the costs involved. The use of such chemicals will certainly increase the death rate of all Amazon species which somehow survive the original clear-cutting, including the Indigenous peoples who live there.

Besides the region being the source of many unique species of plants, bugs, birds, amphibians, and other animals, which solely exist in the Amazon, this rainforest used to be considered one of the most important carbon sequestration sites in a world thrown into chaos and irreversible damage due to increased gas emissions and the global heating resulting from that. Recent studies such as one released in 2021, however, have demonstrated that the damage Brazil’s government has allowed in the Amazon rainforest has caused sufficient damage that the rainforest is no longer a net carbon dioxide absorber. Instead, it is rapidly becoming one of the world’s largest natural greenhouse gas emitters, even without counting the impact of increased methane emissions from the cattle and agricultural production which has replaced it.

In 2021, Ane Alencar, science director of the Environmental Research Institute, said that, sadly, the deforestation of the Amazon Rainforest had already passed the point of being “institutionalized in the country”, with government and industry alike depending on it now for their own profits.

The impact of the continuing destruction of the rainforest on the planet cannot be overemphasized and is a crisis that will impact the entire planet far into the future. It will not just accelerate runaway catastrophic climate change but will also wipe out thousands of unique species that exist nowhere else.

And yet, Brazilians as a whole do little or nothing to curb the destruction and the few who do try to do something are quickly silenced. However, as individuals we can do something and that is to simply stop paying for the destruction by consuming meat. Most of the destruction of the Amazon is to either grow soybeans to feed animals to feed humans or to grow cattle to feed humans. Switching to a healthy whole-food plant based diet means no longer paying for the destruction. After all, there is absolutely no nutritional requirement for humans to consume the flesh of other beings and every reason not to. Meat is not really "high-quality protein" or "nourishing" as industry claims through its vast propaganda network.

A healthy plant-based diet eliminates most heart disease, diabetes and cancer and would save trillions in health care costs.

For more information please watch the factual documentary "Eating Our Way to Extinction."