Based on analysis from a just-released paper, the Iberian Peninsula is now officially in its worst drought in at least 1200 years. The impacts on farming; availability of safe water for drinking, cooking, bathing, and sanitation; and tourism are already threatening the lives and economy of everyone living in the region. 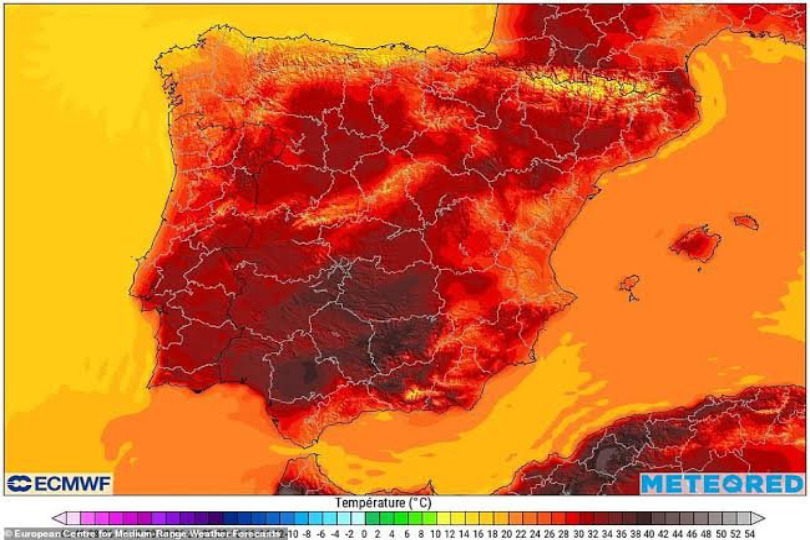 Record high temperatures spread across Spain and Portugal in this satellite data analysis published on May 21, 2022. Photo: European Centre for Medium-Range Weather Forecasts

That the drought and high heat connected with are really happening in the two countries is indisputable, even for the most die-hard climate deniers.

Satellite and on-the-ground reporting revealed approximately a month ago that over 97% of Portugal was suffering from either extreme or severe drought.

And as of May 21, hot dry air pushing up from Africa raised much of Spain’s temperatures roughly 10° - 15° C (18° - 27° F) above seasonal norms for Spain, along with sand and dust carried by high atmospheric currents that dumped throughout the country. On May 20 the airport at Seville hit 41° C (106° F), and major sections of the important Andalucía farming and tourism region crashed through 40° C (104° F) barriers. Madrid, normally far more temperate, reached high temperatures of 36° C (96.8° F), and its northeastern neighbor of Zaragoza climbed to 38° C (100.4° F). On May 21, the city of Segovia logged a record “highest low” temperature of 20° C (68° F) for the night, for the first so-called “tropical night” in that area’s history. Segovia is also located northwest of Madrid, which shows just how widespread the heat wave was.

May 2022 ended up be the hottest in Spain’s history. And it will likely get worse as the climate crisis worsens.

The reason for the drought is tied to how weather patterns are changing because of the climate crisis, global heating, and resultant ocean warming.

Normally the Iberian Peninsula is bathed with regular rainfall during its winter period into spring, driven by low-pressure weather systems filled with moisture as they come from the Atlantic and over the western shores of Portugal. Historically these rainfall patterns have been occasionally disrupted by high-pressure weather systems off that same coast, a pattern typically caused by higher-than normal ocean currents below. The phenomenon is known as the “Azores high”. When that happens, the rain is blocked, and far drier-than-normal conditions appear.

The Azores high, as it is called, has its launching point in the western north Atlantic not far from Bermuda. It appears there in the summer and fall months. When winter and early spring begin, the high-pressure zone shifts to the Azores region located in the north Atlantic’s eastern region. The intensity and movement of that high pressure zone is connected to multiple atmospheric and ocean currents; it is also very much influenced by how hot the oceans are. As global heating has become more intense, the high-pressure systems are becoming stronger, more frequent, and longer lasting than in the past.

The Azores High pattern as it appears in the North Atlantic in winter through early Spring, just off the coast of Portugal and Spain. The tropical wave patterns which influence the high pressure formation are also shown. Photo: NOAA

According to a new research paper just published in Nature Geoscience, the Azore high phenomenon and the lack of rain which happens because is happening now at a rate of once every four years since the 1980s. Prior to that, the Azores highs appeared roughly on a once every seven years basis. The scientists also discovered that the presence of the Azores highs cut average monthly rainfall during the winter months by about one-third.

The data was also correlated with chemical analysis of stalagmites in caves common in the region. These have markers which helped the researchers demonstrate the strong relationship between the changing air pressure during the winters and the presence of rain.

The high-pressure shift also had the side effect of driving the rainfall which would ordinarily have hit Spain and Portugal to the north, so that Scandinavia and northern parts of the United Kingdom have begun to see far more increased winter rainfall spurts for roughly 25% of their winters as well.

According to the paper, in the past the Iberian Peninsula used to receive “on average 732 mm yr–1 (±141 mm yr–1) of rain, roughly 40% of this during winter months”. It has also confirmed that this rainfall rate is dropping rapidly, at a rate of 5 to 10 mm per year per decade in recent years, with a projected additional 10-20% drop by the end of the 21st century. These changes, along with the much higher temperatures caused by the greenhouse gas effect, have transformed the once lush farming areas in the Peninsula into a drought area not seen for over 1,200 years, according to the article.

Though they are well across the globe from each other, this puts Spain and Portugal now in the midst of a life-threatening once-in-a-millennia megadrought similar to that the U.S. Western and Southwestern states are now living with. Both are creating a life-threatening shortage of potable water for drinking, washing, bathing, and sanitation; as well as for agriculture in areas of the U.S. and Europe which are critically important to feeding those living nearby.

Dr. Caroline Ummenhofer of the Department of Oceanography at Woods Hole Oceanographic Institution in Massachusetts, a co-author on the paper, said in an interview connected with the release of the paper that, “The number of extremely large Azores highs in the last 100 years is unprecedented when you look at the previous 1,000 years.”

Her comments were backed up by on-the-ground data sampling in Spain and Portugal, along with advanced computer models which incorporate other scientific data. The analysis looked as far back as the year 850 AD; that is the basis for the conclusion that this is the worst drought either country has seen in over 1200 years.

Specifically within the Iberian region, the researchers’ analysis shows that the increasing dominance of the Azores high in winter and early spring is already in process of radically transforming the agricultural productivity there. As it points out in its opening paragraphs:

Spain is currently one of the most important agricultural producers in Europe. It provides much of the globe’s supply of grapes, oranges, tomatoes, and other vegetables. It is also the biggest producer of olives in the world. As the drought intensifies and spreads, production rates for all these will decline rapidly. The rate at which that decline will become noticeable is in years rather than even decades.

“[Our findings] have big implications for the water resources that are available for agriculture and other water intensive industries or for tourism,” said co-author Ummenhofer to reporters about her team’s findings. “It doesn’t bode well.”

The paper describing the research, “Twentieth-century Azores High expansion unprecedented in the past 1,200 years,” by Nathaniel Cresswll-Clay, Caroline C. Ummenhofer, et. al, was published in the July 4, 2022, issue of Nature Geoscience.

To survive in such conditions, residents will have to adapt and change the way that food is grown, what is grown and how water is treated. This new way of living in water scarce conditions will be demonstrated at the Tataouine Community and Research Center now under construction in northern Arizona.