As the state of California logs its direst and hottest year since at least the 19th century, its two largest water reservoirs are shattering barriers for how low their water levels are. 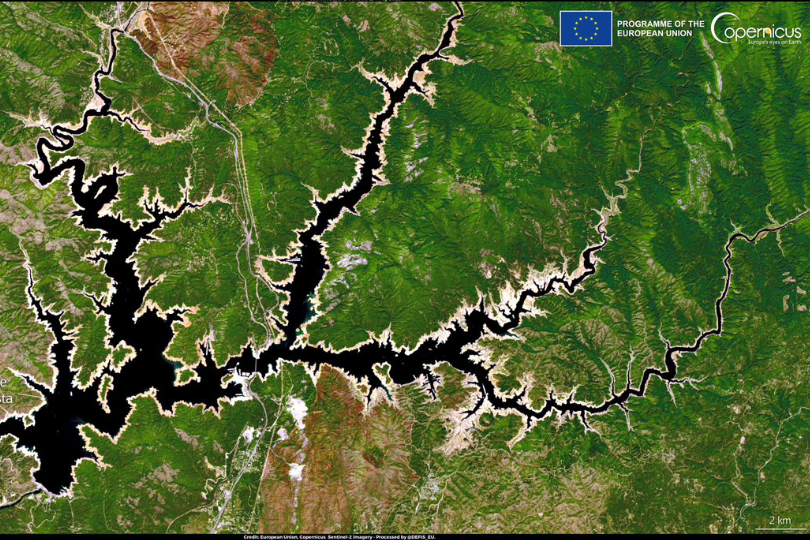 This satellite photo taken on May 4, 2022 by European climate monitoring spacecraft shows just how dry Lake Shasta was, even at that point. The white areas around the lake are regions previously covered with water. Photo: EU Directorate General for the Defence Industry and Space, via Twitter

It all points to a dangerously dry summer, with far more water restrictions on the horizon for the entire state.

Just this week, California officials confirmed that Shasta Lake, the state’s largest water reservoir, was only at 40% of capacity. The number two largest at Lake Oroville was only at 55% of capacity in May, when it reached what sadly was the highest level it had been in the entire year.

It is hard to believe that in February 2017 Lake Oroville was sufficiently full of water from winter rains that many millions of gallons of water ran over the top of that facility’s dam’s main spillway. At the time the flooding forced hundreds of thousands of nearby residents to flee.

Not so now. With rainfall at some of the lowest levels since at least the 1890s, water in California’s snow packs, the source of much of the water runoff which feeds reservoirs, rivers, and the state’s irrigation beds, was already running out some months ago. Rainfall has continued to be sufficiently low that California and Nevada have now broken through to reach what NOAA calls the most extreme conditions of this kind: record driest. 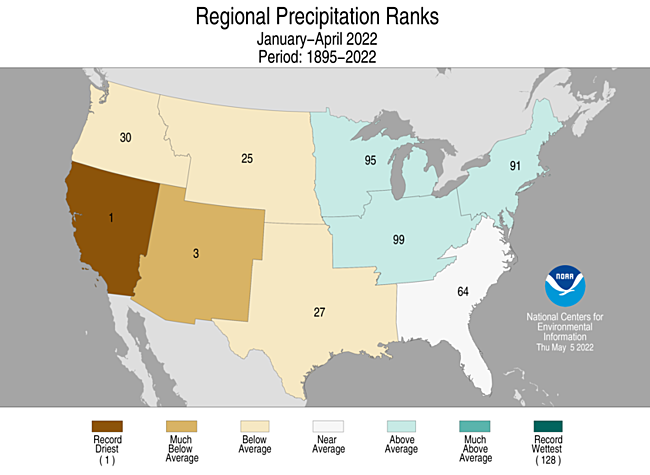 California and Nevada have had so little rain this year that they are now at record low levels ever recorded. Photo: National Oceanic and Atmospheric Administration

Now add to that that the state of California and Nevada had already reached “much above average” temperature conditions for the two states for the January to April 2022 period. In California, just a few weeks ago the city of San Jose in Silicon Valley soared to 95 degrees, with Bakersfield in the Central Valley and the capital a Sacramento rising above 100 degrees. In the critically important Central Valley growing region temperatures exceeded 100 degrees in many places. 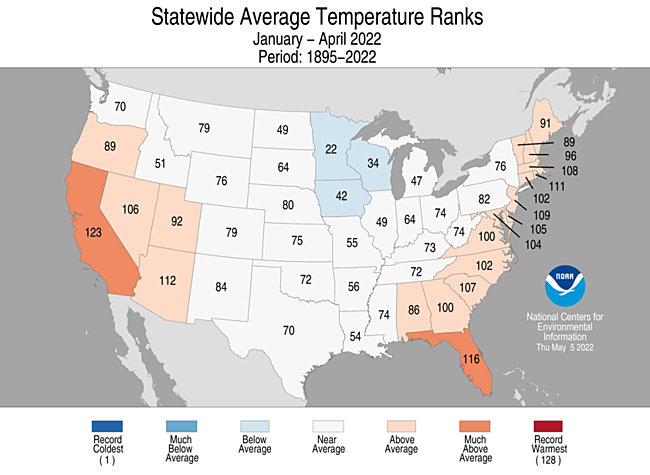 Map of statewide average temperatures across the continental U.S., as compared to records going back to 1895. Photo: National Oceanic and Atmospheric Administration

Further eastward, Las Vega, Nevada picked up the heatwave, with temperatures yesterday spiking at 106° F (39°C) for the day.

The lack of rain and high temperatures in California are part of a 1200-year megadrought cycle the entire American West and Southwest are suffering from. The impacts include the many early wildfires in New Mexico, Arizona, and Southern California, and the historic drawdown of Lake Oroville and Lake Shasta.

The reservoirs formed by those two lakes are the primary feeder sites for the two major state “water project” systems. Lake Oroville provides water for the main central water project system; when all is well it keeps 750,000 acres of agricultural land irrigated and provides approximately 27 million Californians with water for drinking, cooking, and personal use. Lake Shasta is the principal reservoir in the federally manage Central Valley Project. That system supports cities as far north as Redding, close to the Oregon border, and down to Bakersfield in Central California.

Because of the low availability of water at Lake Oroville, as early as a few months ago those in charge of the State Water Project said it would not be able to provide more than 5% of the water needs requested by its contractors this year. The Lake Shasta water level was also already sufficiently low that managers at the Central Valley Project said they would be providing just 25% of the water normally allocated to cities in the region, and that they would be providing zero water to their agricultural customers throughout most of the year.

Another consequence of the low water levels at Lake Shasta – and the high ambient temperatures in the state -- is that the water it normally supplies to a national fish hatchery has become so hot it could bring a halt to fish spawning there. To address that, the managers have put in place chillers which cool the water as it leaves the reservoir and heads to the hatchery.

The consequences of the current drought in California will be felt in many ways. Much agricultural land will be forced to be left to dry out rather than be planted; that will as a result produce markedly lower crop yields for the region, forcing food shortages and further inflation in the cost of produce. Lack of water at homes will force residents to choose between watering their land and having enough left for drinking. Mandatory water use restrictions even tougher than Southern California’s two-day-per-week-maximum lawn watering rule are also expected to go into effect soon.

When wildfire season peaks later this summer and early fall, there will also be far less water available to fight them, unlike in past years.

All this comes as Lake Mead, the nation’s largest water reservoir, located along the Colorado River at the intersection of the states of Arizona and Nevada, just reported water levels within 150 feet of its “dead pool” mark. That is the level a which it will no longer be able to supply water to any of its customers any longer.

Director Karla Nemeth of the department of water resources in the state said both federal and state agencies will be forced to take “a conservative approach to water management” to get through this. Stating the obvious, she added, “we need to be prepared for a hotter, drier future brought on by our changing climate.” However, she didn't offer any real solutions and downplayed the risks by suggesting that California would somehow get through it.

The drying and heating will likely continue and that will mean an end to most agriculture in California and the end to lawns and swimming pools. It may also mean that wastewater will have to be recycled. More desalination will be required.

The United States is the world's second largest user of water per capita and uses 3 times more water than residents of South Korea and 12 times more than Latvians.