Dozens of people have perished while millions are still stranded in various flood-affected regions of Bangladesh and neighboring upstream India due to unprecedented monsoon rains over the past week. 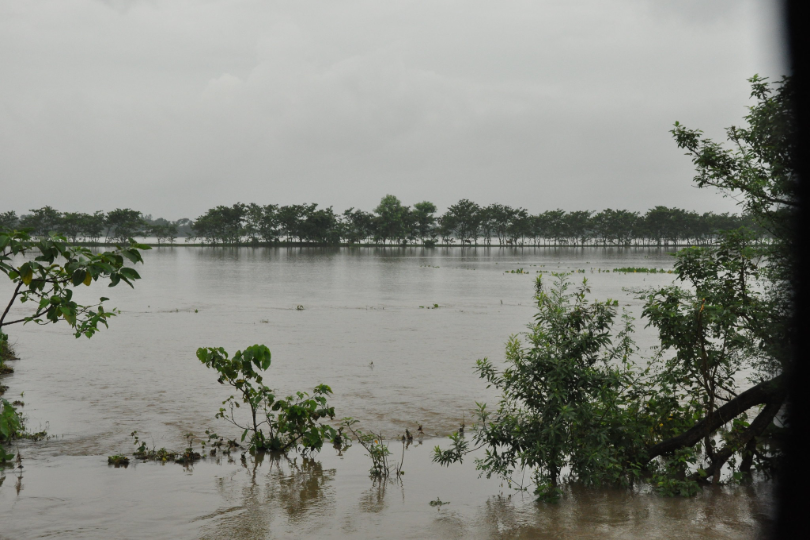 Vast stretches of agricultural fields and villages in Sylhet region of Bangladesh are underwater following incessant rains over the past week. Photo: Marufish, CC

Unprecedented floods, landslides, and lightning killed at least 62 people in India and Bangladesh while displacing millions in Bangladesh and neighboring Assam and Meghalaya, two northeastern states of India, over the last week. According to forecasters, the flood situation may worsen over the next two days, with more rains lashing Bangladesh and Assam.

More than 45 people have lost their lives in different regions of densely populated Bangladesh, especially Sylhet. Almost the entire Sylhet-Sunamganj region is deluged, stranding millions of people. The victims are left with no food and drinking water while communication networks are still down.

A former lawmaker in Bangladesh, Syed Rafiqul Haque, said the country was facing a humanitarian crisis, and immediate rescue and relief operations were needed. So far, approximately 105,000 people have been evacuated, but police officials estimated that over four million were still stranded.

The calamity occurred in Sylhet even as the region was still recovering from its worst floods in nearly two decades in late May. At least ten people died, and four million others were affected during the floods in May this year.

Officials said that floods are a common menace to millions of people living in the low-lying areas of Bangladesh, but experts claim climate change is augmenting monsoon storms, their frequency, ferocity, and unpredictability.

According to reports pouring in from Bangladesh and India’s northeast, persistent rains over the past week have flooded vast expanses of northeast Bangladesh, and thousands of troops were to evacuate people cut off from the remaining world.

Arifuzzaman Bhuiyan, head of Bangladesh’s Flood Forecasting and Warning Centre, said all schools in the region have been turned into relief shelters to house entire villages deluged as several rivers in Bangladesh swelled to dangerous levels. The situation was exacerbated by heavy rainwater flowing from the mountains.

The monsoon rains serve as a lifeline for farmers across South Asia but also cause deaths and destruction to property every year. Both Bangladesh and India have experienced progressively more extreme weather in recent years. However, environmentalists warn it could lead to more disasters, especially in low-lying and densely populated countries.

The flooding forced Bangladesh’s third-largest international airport in Sylhet to shut down Friday. Forecasters said the situation is likely to worsen over the next two days with heavy rains in Bangladesh and India’s northeast.

“We expect moderate to heavy rainfall in several parts of Assam till Sunday. The volume of rainfall has been unprecedented,” said Sanjay O’Neil, an official at the meteorological station in Guwahati, Assam’s capital.

In Bangladesh, regions close to the Indian border have been worst affected. Water levels in all major rivers across the country were rising. The warning center in Dhaka cautioned that the flood situation is likely to deteriorate in the Sunamganj and Sylhet districts and Lalmonirhat, Kurigram, Nilphamari, and Rangpur districts in northern Bangladesh.