Over 97% of Portugal is Now Suffering from Extreme Drought

Global drought caused by high heat and weather disruptions due to the climate crisis has logged an entire country as its latest victim. 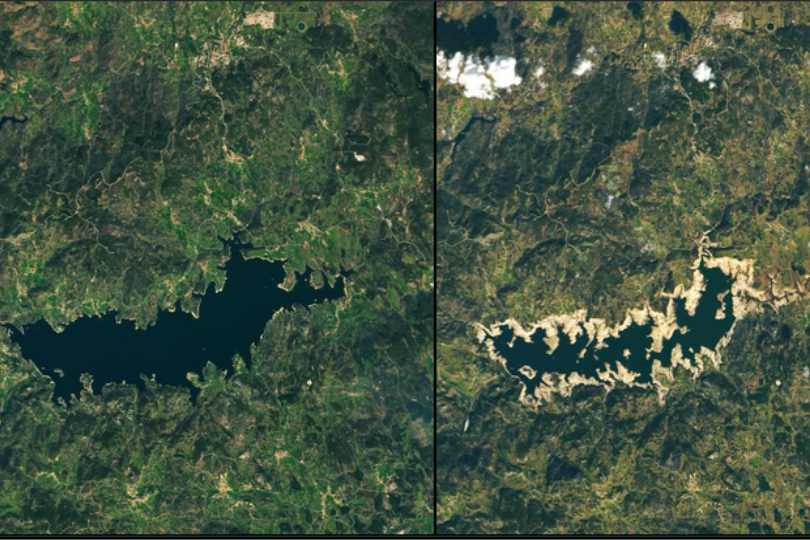 A severe drought which is continuing now in Portugal has caused major shrinkage in the water levels at the important Alta Rabagao Reservoir in the northern part of the country. The left is before the recent drought, the right shows how much the reservoir has dried up just in the last months. Original images captured from NASA Earth Observatory satellite data. Photo: Pragya Chaturvedi, via Twitter

May 2022 is going down in the record books as the hottest May Portugal has experienced since 1931.

When the month was concluded, the Portuguese Institute for Sea and Atmosphere (IPMA) showed mean temperatures for the month at 19° C (66° F). For a country used to moderating cool breezes from the ocean much of the year as part of its Mediterranean-like climate, this was a jolting 3° C hotter (5.4° F) than normal on average.

A further shock in the data recorded was when the top temperatures were being recorded. According to the IPMA one-fifth of all weather stations reporting in the country had logged their hottest temperatures of the day between the hours of midnight and 8 AM.

The high heat came at a time when a multi-year pattern of increasing drought in Portugal was growing rapidly worse. Using the Palmer Drought Severity Index (PDSI) as the standard for evaluating meteorological drought, as of the end of April 8.5% of the country suffered from weak drought, 87.2% from moderate drought, and 4.7% in severe drought. At the time no portion of the country was suffering from the next-to-worst classification, extreme drought. 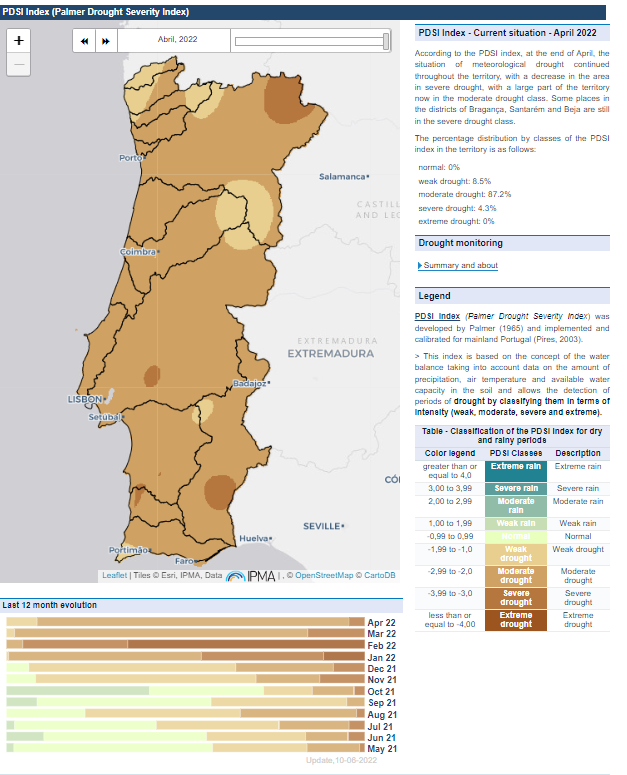 A map of drought conditions in Portugal in April 2022, along with historical charting data for the worsening dry conditions over the last 12 months. The situation in May was far worse than this April snapshot, but the maps for that are still being generated. Photo: Portuguese Institute for Sea and Atmosphere

As of the end of May, the situation had shifted dramatically worse from even that previous very dangerous scenario. At that time, the IPMA noted that 97.1 percent of the country was in “severe” to “extreme” drought conditions.

The direct cause of that was record low levels of precipitation for the month. Average rainfall in the country ran at 8.9 millimeters (0.35 inches). That was 13% of what normally happens in May.

The lack of rainfall combined with far higher than normal, the drought conditions were sufficiently serious that water content in the soil as of the end of May was significantly lower than normal. Tests showed soil water content was about 20% below typical numbers for the Alentejo, Algarve, Central, Tagus Valley, and North Portugal areas of the country.

Even before the severe conditions of May, the ongoing severe drought in the region had by January 2022 had already resulted in 24 out of the country’s total of 55 dams with less than half their normal reserves of water. Five were below 20% of normal. 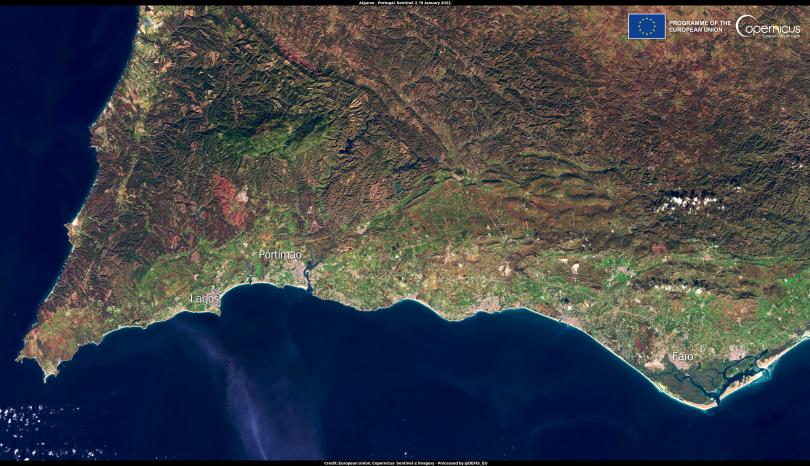 A satellite image showing the already accelerating presence of drought in southern Portugal, taken January 28, 2022. The coastal areas on the west(to the left in the photo), facing the northern Atlantic ocean, were showing extremely dry conditions even then. Photo: Copernicus Imaging Service

At that time, crops as varied as oranges, grapes in vineyards, and other produce were virtually destroyed, after three months of only 35% of normal rainfall in Spain and similarly low across the Iberian Peninsula.

While Portugal is manifesting far worse drought than its neighbor Spain in the Iberian peninsula, that does not mean Spain escaped the record heat hitting its western neighbor. On May 23, temperatures in Barcelona reached a record high of 30° C (86° F). The situation was so extreme the city has begun to deploy emergency “climate shelters” for people without access to water or air conditioning.

Forecasters now predict the current situation will grow worse as the summer approaches and temperatures rise further. High pressure systems continue to be forecast in the area and will keep rainfall low for at least several more weeks.