Populations of the phytoplankton that is the foundation of the ocean food chain and source of half of Earth's oxygen supply is collapsing. 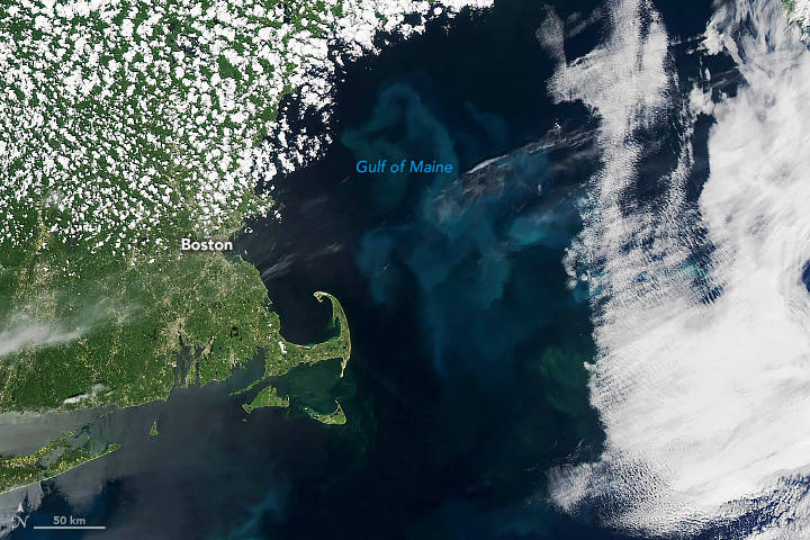 Phytoplankton is the foundation on which most all marine life depends because it is the start of the food chain. But, it is also the foundation for terrestrial life because it produces about half of our planet's oxygen that we and most other life depend upon. Even land plants need oxygen.

According to the research, due to ocean currents which are now bringing increasingly warmer, saltier, and more acidic water thanks to global heating of the planet and carbon dioxide absorption, phytoplankton have been approximately 65% less productive in the Gulf than just two decades ago.

That’s according to a study funded by NASA and carried out by scientists at East Boothbay, Maine’s Bigelow Laboratory for Ocean Scientists.

A video summary of that study is below.

The Gulf of Maine helps fuel New England’s marine ecosystems and economy. Like plants on land, phytoplankton absorb carbon dioxide from the atmosphere and use photosynthesis to grow, and then become a food source for other organisms. Disruption to their productivity has a devastating impact on marine life and the communities that depend on them.

“Phytoplankton are at the base of the marine food web on which all of life in the ocean depends, so it’s incredibly [significant] that its productivity has decreased,” says William Balch, the Bigelow Laboratory scientist who led the study. “A drop [of] 65% will undoubtedly have an effect on the carbon flowing through the marine food web, through phytoplankton-eating zooplankton and up to fish and apex predators.”

The results come from the research team’s analysis of the Gulf of Maine North Atlantic Time Series (GNATS), a 23-year sampling program of the temperature, salinity, chemical, biological and optical measurements of the gulf. These measurements are critical to make sure satellite observations from space are accurate. Balch says the changes that they are recording show an intricate connection between the gulf and the greater Atlantic Ocean.

“It’s all being driven by this gigantic windmill effect happening out in the North Atlantic, which is also changing the circulation coming into the Gulf of Maine,” Balch explains. “There used to be these inflows from the North Atlantic bringing water from the southward-flowing Labrador Current, making the gulf cooler and fresher, as opposed to warmer and saltier, which is where we are now.”

Since 1998, the Bigelow Laboratory has tracked several biogeochemical changes in the gulf with GNATS. The team collects samples via commercial ferries and research vessels running the same routes repeatedly. They also use autonomous gliders that cross the same sampling line.

The GNATS dataset ultimately will compare changes observed directly on the gulf’s surface waters to observations by Terra, Aqua and other NASA satellites acquiring ocean color data. The measurements complement satellite observations from space that can sometimes be clouded by fog.

Data on the many colors of the ocean associated with different types of concentrations of phytoplankton within the GNATS dataset are expected to contribute to the upcoming observations by NASA’s Plankton, Aerosol, Cloud, ocean Ecosystem mission, or PACE, which will help study phytoplankton communities and track harmful algal blooms that can disrupt ecosystems, fisheries and tourism in the Gulf of Maine.

“We are focused very much on that lower level, the phytoplankton level,” says Bigelow Laboratory scientist and project co-lead Catherine Mitchell. “But the changes at that level can have all these implications at the higher species, the fisheries, the lobster, and all those kinds of industries that are important within the state of Maine and other states that border the gulf.”

The GNATS dataset is available for scientific, commercial, and educational purposes via NASA’s repository for in situ oceanographic and atmospheric data.,

The detailed results of the study were published in the article, “Changing Hydrographic, Biogeochemical, and Acidification Properties in the Gulf of Maine as Measured by the Gulf of Maine North Atlantic Time Series, GNATS, Between 1998 and 2018,” by William M. Balch, et. al., in the 7 June 2022 issue of the Journal of Geophysical Research: Biogeosciences.