Tough Water Use Restrictions Go Into Effect in Southern California

As the drought in California has continued to worsen, the battle for how much water can be used for what has intensified. On June 1, water use restrictions in Southern California that may become a model for the rest of the western U.S. just became mandatory. 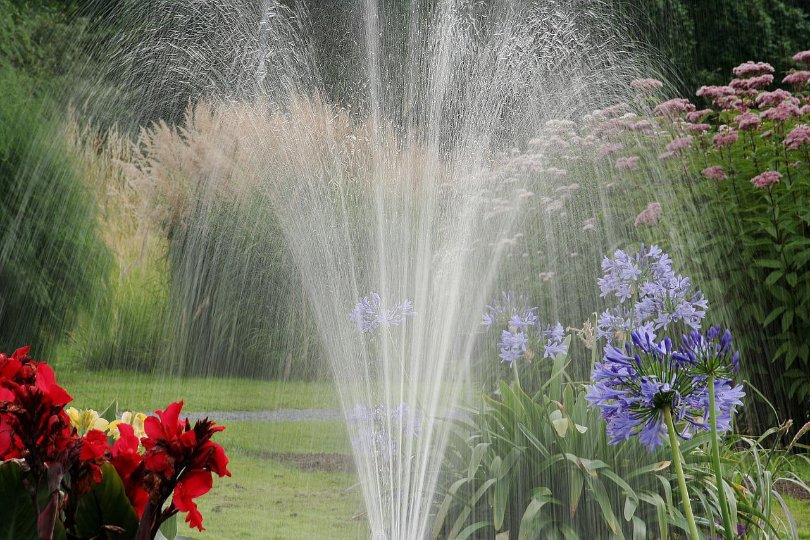 In Southern California, watering of the lawn and ornamental plants around a residence has just been limited to two days a week. Photo: Image by arunas68 from Pixabay

The real impacts of the current megadrought in the American west are finally coming home to roost in Southern California.

Yesterday the National Drought Mitigation Center (NDMC) at the University of Nebraska – Lincoln issued a drought summary that should frighten anyone living in the United States. The report, which covered Washington, Oregon, Idaho, and Montana across the northwestern region, plus California, Nevada, Utah, Arizona, and Mexico from the pacific coast across the southwest, showed that over 54 million people in that area are currently living in drought conditions. It also showed that approximately 75 percent of that population is currently dealing with what the NDMC has identified as Severe to Exceptional Drought Conditions. 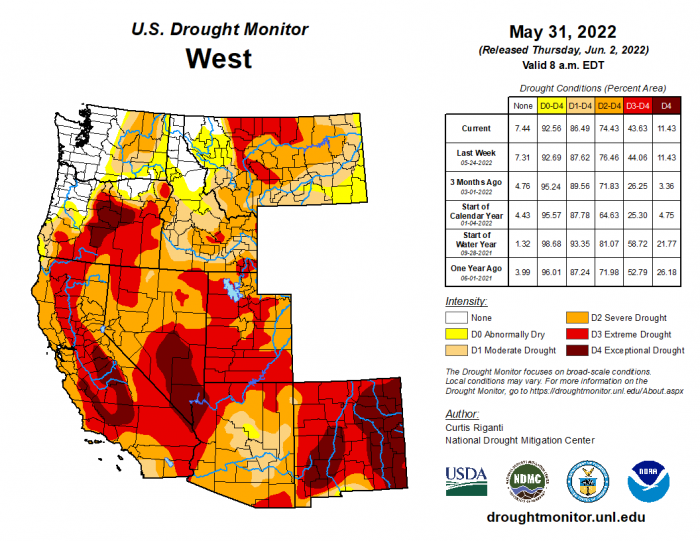 As of May 31, 2022, drought conditions in much of the western United States remained at severe levels, with around three-quarters of those living there suffering from severe to exceptional drought. It is going to get far drier as the summer heats up. Photo: National Drought Mitigation Center

As the current regional drought analysis was being updated last week, the California Department of Water Resources released the news that the February through April 2022 period was the driest the region had seen in 122 years.

This comes after California’s Governor Newsom had issued no less than five Drought Emergency declarations in just twelve months, with the latest happening in March. Then his executive orders included a request for voluntary water use reductions of 20 percent, just to ensure sufficient water was available for drinking, sanitation, and agriculture in the state.

Though Newsom did not know it at the time, earlier warnings to conserve by at least 15 percent had already fallen on mostly deaf ears. A report issued by state agencies early last month said water use for lawns and plants around residences in March was in fact up by 19 percent compared to two years ago.

Water use data for April and May is still being analyzed.

Reservoirs in the state are already at record-low levels.

Federal regional reservoirs, like those at Lake Mead and Lake Powell, are also dealing with water levels at the lowest seen since they were both originally constructed. As of May 24, Lake Mead’s water line was at 1,049 feet above sea level, meaning far less water from that lake’s source, the Colorado River, is available for distribution in California, Arizona, Nevada, and parts of Mexico now compared to in the past. Lake Mead is currently under what the Bureau of Reclamation calls Tier 1 restrictions, which among multiple issues means Arizona has had 18 percent less water from the lake since January of this year. If the lake stays below a level of 1,050 feet as of January 2023, a Tier 2 emergency will be declared. That would force Arizona to deal with 21 percent less water than normal and Nevada to see cuts increasing from 7 percent to 8 percent. If the lake level drops to 1045 feet, that will force an additional cutback of 5 percent from California’s existing water allocation from that reservoir.

The situation is dire enough that states are now demanding a reset to the water distribution allocations already agreed to.

Snowpack in the Sierra Nevada mountains, the other source of water which California relies on to melt and fill local reservoirs every spring, is also down by 22 percent compared to normal levels as of roughly three weeks ago.

Snowpack across the entire state’s mountain ranges was down by 60 percent as of March.

Multiple water restrictions and fees have already been assessed to put more pressure on state residents to cut back on their water use. On May 10, the East Bay Municipal Utility District, a region serving 1.4 million in the Oakland metropolitan area, issued an 8 percent surcharge on water bills to cover expenses the water provider is having to deal with; this comes in addition to a mandatory 10 percent cutback in water.

The situation for the state affects far more than water for household use, of course. Farmlands, particularly in the state’s Central Valley, have been forced to leave hundreds of thousands of acres of cropland without seeding simply because irrigation water is no longer available. Considering that the region historically produces around 25 percent of the nation’s food, this will hit home across the country as food shortages increase and prices spike, in an economy already dealing with record inflation. With major producers in Arizona and Texas also hit hard, fresh produce from the U.S. will skyrocket in price and be hard to come by, putting more pressure on other growing regions.

The farmers who provide that food will also struggle to make ends meet and may go bankrupt, as water remains scarce, prices for that important commodity go up as well, and lower production means less revenue coming in.

On June 1, the Metropolitan Water District of Southern California issued its most severe directive on water use in its existence. It has ordered all who water outdoors what would be considered as “decorative” reasons to do so at most two days a week, with the days set based on street address. By issuing this order and following through on other restrictions, the region hopes to see the region use 35 percent less water than it did in the past.

One glaring exception in the rules involves the filling of swimming pools. Though the oversight in addressing this may soon be corrected, for now it appears that even in this severe shortage swimming pools are exempt from the new restrictions.

If that 35 percent cutback is not achieved, the Metropolitan Water District of Southern California said it may be forced to shut down all such outdoor watering by September.

By then the state will also be facing an additional challenge it cannot just regulate away. The state’s fire season will be in full swing and water will be needed in larger quantities than ever just to fight the wildfires.

There is ample water in the U.S. overall but getting it from where it is abundant to where it is needed is not even on the drawing board. Tens of billions are spent on oil & gas pipelines, trillions on needless wars, but it is not socially or politically feasible to build any substantial water pipelines, at this time. There is not yet any major water industry to put politicians into power to serve their needs and the evil billionaires that control dismedia (disinformation media) want to wreak havoc on civilization with droughts so they can more easily rule it, so real solutions are ignored by them.

With the west likely to continue to dry out, water will become ever more expensive and scarce and there will be a mass migration away from affected areas. Places with senior water rights, like Grand Junction, Colorado, will continue to become ever more crowded with real estate prices going up and up.

There is a simple and easy solution. That is to shift how we think about water, emulate nature and simply re-use water in a circular system that converts wastewater into energy, nutrients, food and then back into clean potable water.

People don't like the idea of drinking water that has been used in a toilet but most of those who rely on river water are already doing so. They just don't know it. When the City of Grand Junction pulls it's tap water from the Colorado River it contains the somewhat treated wastewater (sewage) from every community upstream. By the time the trickle of water in the Colorado River river reaches Mexico it has been through countless toilets, showers and sinks.

A lot of wastewater is currently being reused but mostly just for landscape irrigation. It is not being fully converted into potable water but can be.

A new demonstration project to show how water can be re-used in a drought-proof, self-sufficient and sustainable habitat has started construction in northern Arizona. It is called Tataouine and it will continually reuse water in a circular system.