Earth's monthly average CO2 emissions started its usual seasonal dip but then reversed and has reached a new record high when it should be dropping. Something massive and potentially catastrophic is going on. 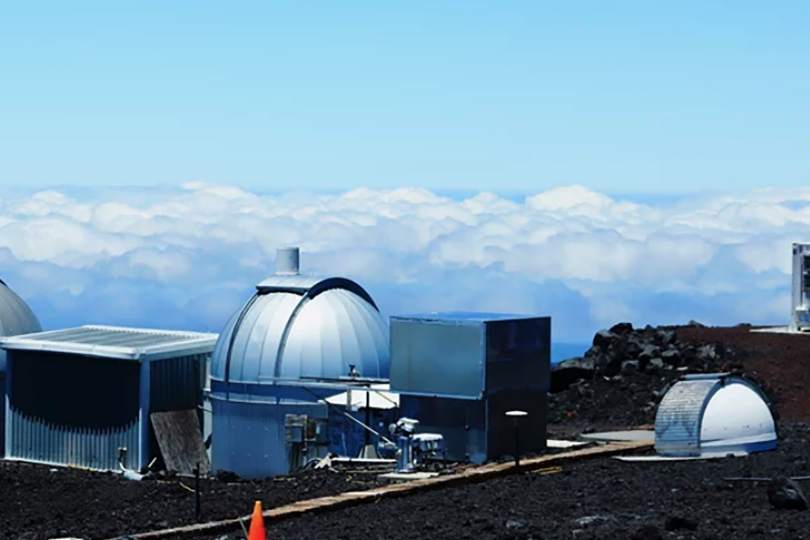 The National Oceanic and Atmospheric Administation's Mauna Loa Observatory, located on the island of Hawaii. This is where NOAA conducts its ongoing carbon dioxide emissions monitoring. Photo: NOAA National Centers for Environmental Information

The official carbon dioxide atmospheric average for April and early May was just released by the National Oceanic and Atmospheric Administration (NOAA) Global Monitoring Laboratory.

The atmospheric emissions sampling laboratory metric showed CO2 emissions peaked last month at 420.23 parts per million. That sampling, which typically is for the highest such measure of the year, was up 1.18 ppm from last year’s April peak of 419.05 ppm.

That was bad enough. But on May 14 emissions went even higher, to 422.04 ppm. That was an unexpected increase from May, since historically emissions drop slightly this month. That is 3 ppm higher than the April 2021 highest value. It also happens to be 3.7 ppm higher than a May 8, 2021, recording of 418.34 ppm. 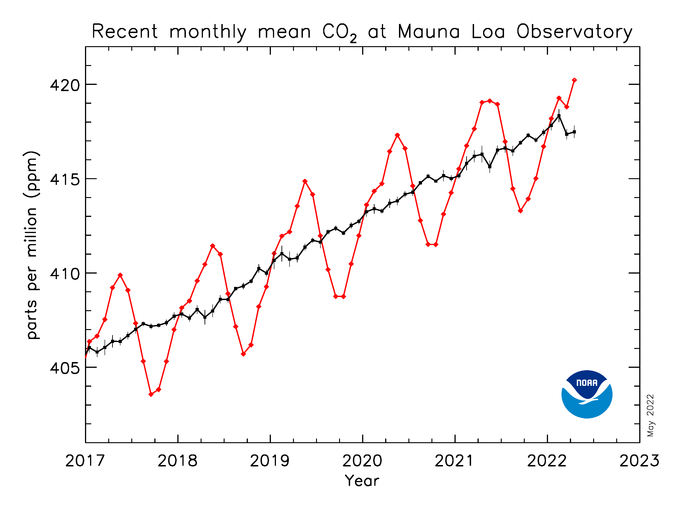 Monthly mean carbon dioxide emissions as recorded at Mauna Loa Observatory from 2017 through April 2022. The red lines are the actual monthly mean values, centered on the middle of the month. The black lines and symbols represent the same, after correction for the average seasonal cycle. Photo: NOAA

The carbon dioxide concentration measurement taken in April and May each year are highly important because it is when concentrations reach their highest over the twelve-month period surrounding that date and then start to dip as plants commence growing rapidly in the Northern Hemisphere and winter fossil fuel heating ends. And there was a dip as expected in March and April but then it sharply reversed. This is highly anomalous and means that something massive is happening to either retard plant growth or increase CO2 emissions, or likely both.

In the Northern Hemisphere, the cool spring in the U.S. meant more burning of fossil fuels for heat. The continued severe and extreme drought conditions in the western half of the U.S. has kept plants from growing and absorbing CO2. Extreme heat and drought in parts of Asia did the same. Many wheat crops simply weren't planted in Ukraine. Then there were the wild fires all across the Northern Hemisphere and Southern Hemisphere that released massive amounts of CO2 plus eliminated the plants that would have absorbed CO2. Plus there continues to be a substantial increase in transportation and burning of fossil fuels as the world catches up from the insane COVID lockdowns and they continue to shop from home and have stuff delivered after so many locally owned retailers were put out of business by malicious government policy. Add in the continued warming of the oceans and the reduced CO2 that they can absorb. Warmer water hold less gas and that means less CO2 going in and more coming out of the water.

But, is more going on?

As it continues to heat up, the Arctic has been spewing out massive amounts of CO2 and methane. The Arctic holds more than double the amount of carbon emitted by humans for all time, enough to drive CO2 levels to some 900 ppm.

Earth's climate was remarkably stable for the past 10 million years up until human industrial activity, with CO2 at about 280 ppm. That stability helped life evolve to its current forms. 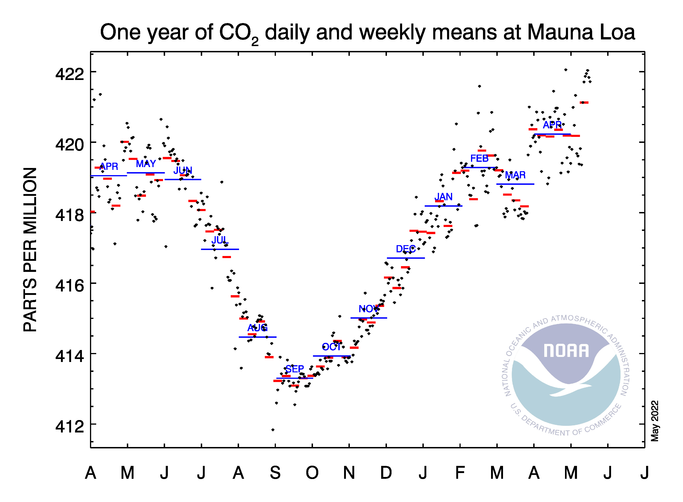 As the NOAA Global Monitoring Laboratory notes, this data is still officially preliminary, “pending calibrations of reference gases and other quality control checks”. But past data has never changed enough in a final analysis to matter. 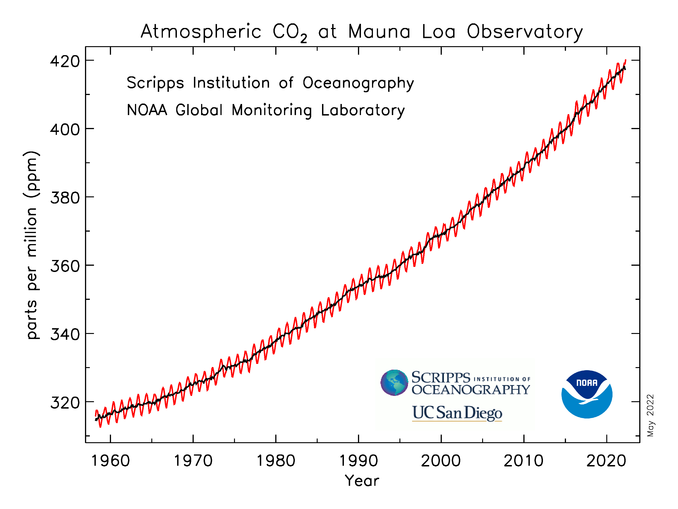 Monthly mean carbon dioxide measured at Mauna Loa Observatory, Hawaii, from the earliest records were kept starting in 1958 to the present. Photo: NOAA

The graph above puts the latest CO2 emissions rise in perspective since March 1958, the date when C. David Keeling of the Scripps Institution of Oceanography established a repeatable means of tracking this important data on a near-continuous basis. NOAA began its own separate measurements in 1974, and has run them in parallel with the Scripps data every year since.

Together they paint an undeniable picture of the impact of fossil fuel emissions over time on CO2 concentrations.

The combination of carbon dioxide primarily and methane (also known as natural gas) together are the primary factors in how the “greenhouse gas effect” functions.

As the above graph shows, the impact of the greenhouse gas effect on temperature has been proven not just in modern day but also from analyses of rock samples and other geologic data dating back almost 1 million years ago. The tight correlation of precisely how strong global heating has become and the amount of carbon dioxide in the atmosphere is undeniable.

No, the climate crisis not a hoax. We are NOT headed for an ice age anytime soon, unless someone starts a massive nuclear war and that triggers a prolonged nuclear winter.

Yes, sinister forces are using the climate crisis to advance their own agendas. Important data is ignored or suppressed while lies are told far and wide by those in power and those who would like to be in power.

Humanity faces an existential crisis and most are not responding rationally or effectively. But, a few are thinking ahead and taking action now to help ensure their future survival.

Climate Survival Solutions was founded to develop strategies and technologies to help the world address the many hazards created by the climate crisis and global heating. It has already developed numerous solutions to manage the precious water resource we have now and recycle much of it through sustainable, energy-efficient means. Its scientists and engineers are also investigating new ways of growing crops which can save over 95% of the water consumed by conventional agricultural means. To learn more, please visit their website.