By the evening of May 13 this week, many had a chance to observe close at hand a terrifying weather phenomenon known as a “haboob”, an enormous dust storm seen in the driest of climates such as the deserts of the Middle East. The problem is this pattern was seen simultaneously in multiple locations across the American Midwest.

A haboob is that swirling mass of dust which rises out of dried grounds areas, lifted by heat pulses emanating from the ground. It gathers size and force quickly, makes visibility impossible, and turns what used to be previously clear sky into a rolling wave of soil dust which makes seeing impossible.

One of these which came up Thursday near the end of daylight in Sioux Falls, South Dakota. It came at around 4 in the afternoon, began spinning in the air and picking up dirt rapidly. Reports of 63 miles per hour wind gusts were recorded just as the storm started. Not long after, the wave of dirt and heat and almost no moisture grew faster both in rotational speed and in momentum parallel to the ground.

Trees, buildings, and other property were damaged throughout.

Other similar storms were reported during the same day in portions of Minnesota to the east of this one, and all the way to Nebraska and Little Rock, Iowa in the west. Another haboob was observed in northern Texas on May 11, as part of the overall weather pattern.

Think this is just an exaggeration? Take a look at these photos taken of haboobs in the central U.S. just over the last week. 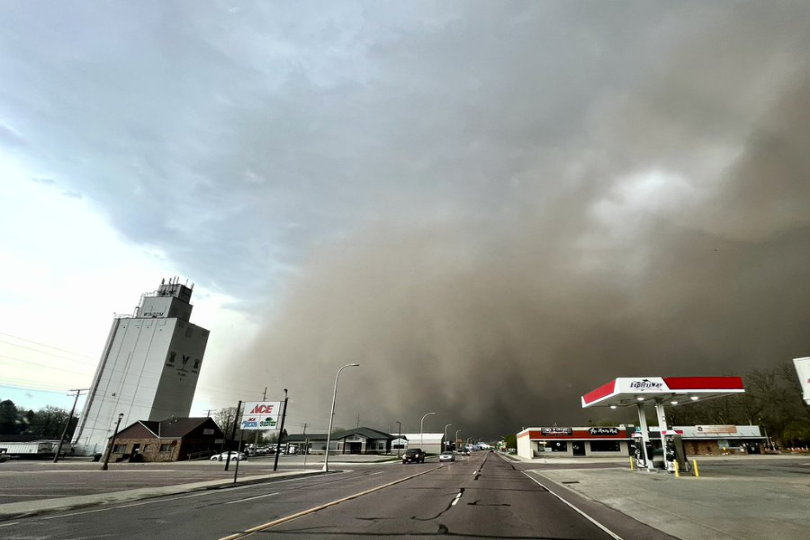 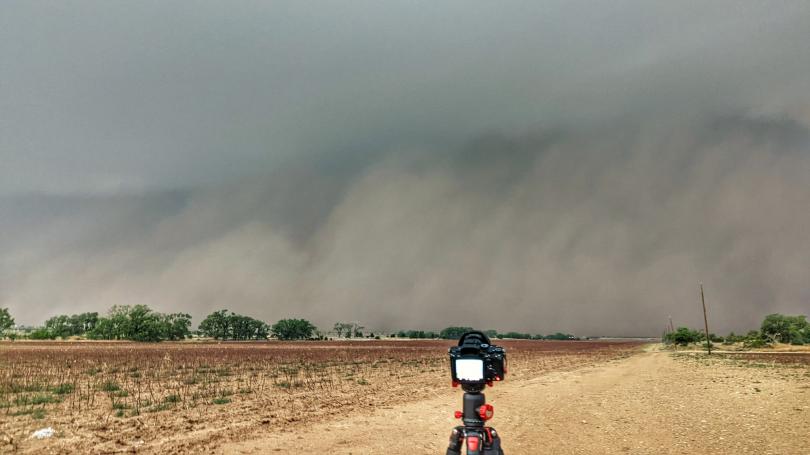 A haboob over Clarendon, Texas. Photo posted on May 11. Photo: Alex Spahn, via Twitter 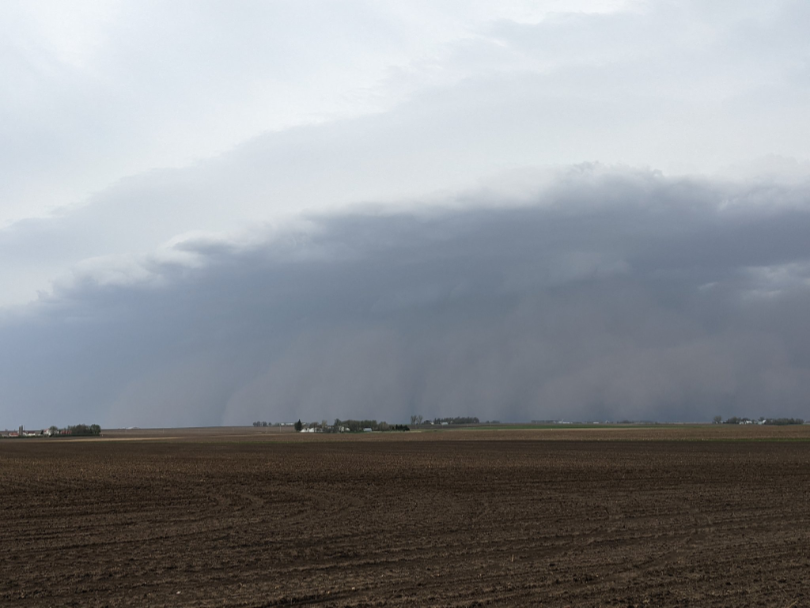 A haboob over the Iowa plains. Posted May 13. Photo: Nick Stewart, via Twitter 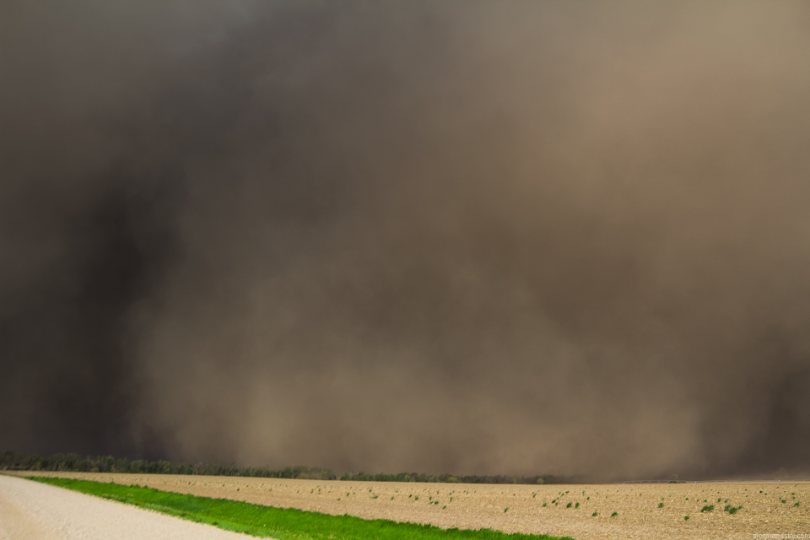 A haboob in full swarm conditions over Rising City, Nebraska. Photo shot on May 13. Photo: Storm and Sky

That haboobs have arrived in the American Midwest is a shock to many but really should have been no surprise.

It is part of the American megadrought pattern which has taken over much of America’s breadbasket growing region in the Midwest, to the plains states west, and southwards, where wildfires currently rage over large regions of New Mexico now, and which destroyed major forests and property in Arizona last month.

The drought has also taken over further westwards, where a major fire in Laguna Niguel, California has burned 200 acres, and turned 20 homes to cinder just in the last few days. Another 11 homes in the fire area have been badly damaged. With just 15 percent of this fire currently contained, it will certainly spread and cause more harm.

The fire season further north in California and Oregon is coming soon as well.

Each may have its own version of “haboobs” coming soon.

This megadrought is the worst in over 1200 years based on extensive scientific analysis. It has deepened in precisely how dry and hot it is during the last two decades.

It is quickly overtaking most regions west of the Mississippi and southwards from roughly in line with the southern border of South Dakota. 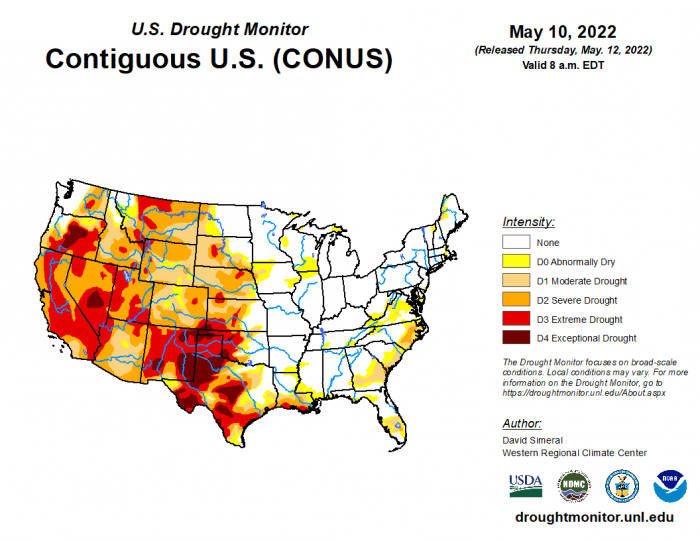 Map of drought conditions in the U.S. as of May 10, 2022. Photo: National Drought Mitigation Center

Beyond the dust storms and the heat, the drought is also behind why the Bureau of Reclamation had to cut Arizona’s water feed from the Colorado River this year by 20 percent of its normal allocation. More may be cut back by the end of the year.

A product of the climate crisis, the megadrought is proving to be as frightening in in its implications as the increased power and number of hurricanes which have occurred on the U.S. east coast. Those are fed by superheated oceans on that coast. The only positive for those storms is they are not plagued by the dryness of the American West and Southwest. They are on track this year for another record year of storms.

In the drought afflicted by the megadrought, projections are that the regions the U.S. depends on for most of its corn, cotton, soybeans, and all varieties of vegetables are already in the process of drying up.

There is also already a fight for water going on between private landowners who simply want to water their crops and the government. Mandatory water rationing is coming throughout much of the west, with lawns now ordered to be allowed to die, rather than watering what are being deemed inessential items to keep wet.

There is insufficient water for just about any needs, whether it be for the essentials of irrigating crops, drinking water, cooking, and public sanitation, or the unnecessary ones of keeping one’s Bermuda grass green or providing water for more fracking.

The drying up of the lands is bringing conditions reminiscent of the Dust Bowl area that struck the Midwestern prairie states from 1934 to 1940. Then farming techniques were far from as advanced, so when the rains failed then the farmlands mostly failed. They also did further damage to their lands by pulling out the deep grasses which kept soil in place and moister in the driest of times. 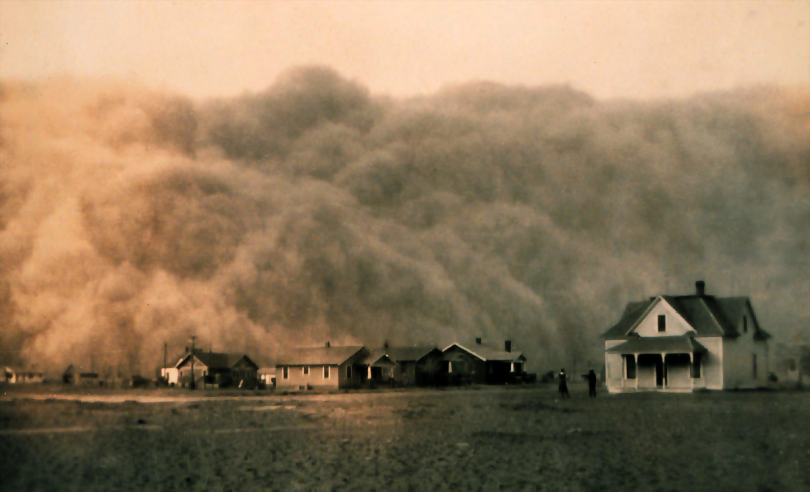 Farmers today are more adept in adapting to different routine climate conditions. This megadrought is on a scale far worse than in those times, however, and they are already realizing it is beyond their capacity to do much about it.

If the situation continues its present track as expected, much of the nation’s agricultural growing capability is literally turning to dust. Fights over the water that is left will break out across the country, starting first in government offices and courtrooms. As it becomes clear the governors and mayors have no power to do anything about it, and absent any intelligence leadership in Washington, there will likely be no meaningful action.

As agricultural yields continue to plummet, the price of food will rise to levels many will no longer be able to afford, more will go hungry and more will resort to taking food from others by force.

As water faucets stop flowing, millions will be forced to migrate eastward and will abandon their homes. Housing prices in the west will plummet while those in the east will skyrocket. Mortgage defaults will collapse the financial system.

This is the climate crisis in action. It is happening now, not ten or twenty years from now, or at that mysterious 2050 year the nations of the world have been rallying around as when they will somehow be producing “net zero” carbon emissions, as a way to avoid having to take any meaningful action now.

Americans could have already been enjoying a prosperous clean green electric-hydrogen economy and some of those old oil & gas pipelines could have been converted to water pipelines. The largest ones could have been converted to pneumatic transportation systems for all kinds of products, including food. But we were denied that future because Americans were sold on a predatory capitalist system camouflaged as democracy while being told they were the greatest nation on Earth.

It is now far to late for any prospect of green prosperity but it is not too late to engineer survival and that will start with water and how we use it. It can no longer be a resource we use just once and then discard, via overflow from farmland into rivers and lakes, or from our sinks, toilets, and showers where the pipes allow what is mostly useful water with proper treatment to be just thrown away.

The times will require shifting to the growing of crops which are more resilient to extreme drought and heat. They will demand new ways of farming, built on hydroponics and aeroponics, grown indoors, to minimize the need for water overall.

It will require jettisoning crops such as almonds which while nutritious and delicious take far more than their own reasonable share of water.

It will also require elimination of meat and poultry from the diets of most, to avoid allocating so much scarce farmland for livestock to graze upon.

The only question is whether people will have the courage and will to radically change the way they live. Most won't, but some will. Will you be one of them?

Climate Survival Solutions has been formed to develop strategies and technologies to help the world address the many hazards created by the climate crisis and global heating. It has already developed numerous solutions to manage the precious water resource we have now and recycle much of it through sustainable, energy-efficient means. Its scientists and engineers are also investigating new ways of growing crops which can save over 95% of the water consumed by conventional agricultural means. To learn more, please visit their website.