An unusual research study showed the total number of flying insects in Great Britain has fallen by 58.5 percent in less than two decades. Their absence, which is tied to global heating, expanded use of pesticides, and urban sprawl, is already triggering the collapse of natural ecosystems throughout the country.

If the bee disappeared off the face of the Earth, man would only have four years left to live. - Albert Einstein 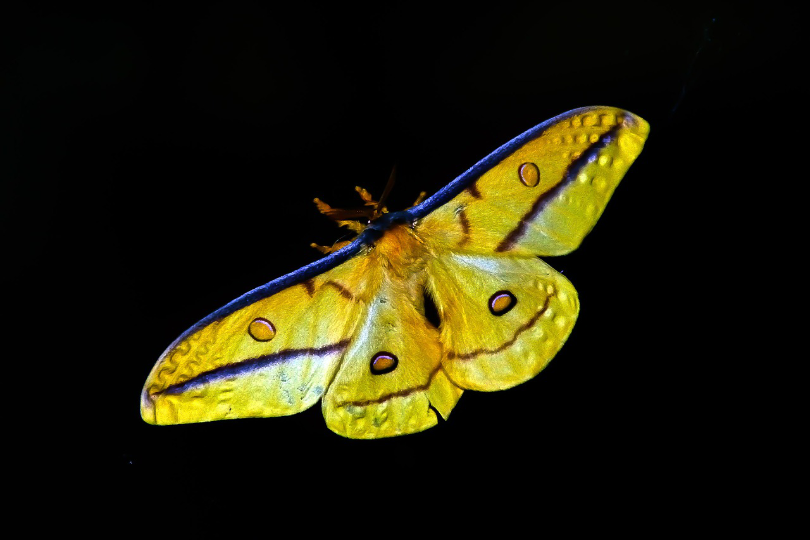 Moths are among the many flying insects collected during the Bugs Matter license plate study. Photo: Image by sandid from Pixabay

The study, conducted by a nonprofit environmental research and activist organization called Buglife, gathered its data via an unusual collaboration between scientists and citizens.

That data gathering began with individuals visiting the organization’s website, where they downloaded an app. People affixed paper splatter targets to their car license plates. The app helped track where they had driven their cars and the targets recorded the “splats” as the car collided with flying insects during their travels. Data was summarized based on the number of splats collected per mile. 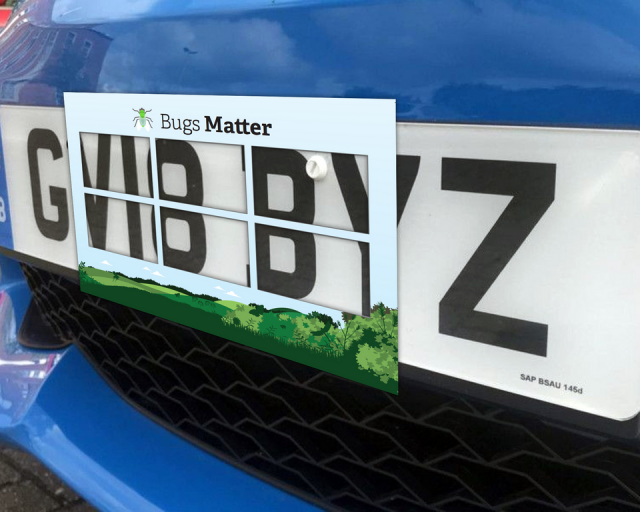 One of the Buglife organization's "splatter targets" for insects captured when they collided with drivers' license plates. Photo: Buglife

Rainy days were excluded in the data gathering period, since it would have washed off some of the splats.

Three separating sampling runs have been collected so far. The first involved 14,466 “journeys”, as the study refers to them, in 2004. That study, nicknamed the “Big Bug Count” was conducted by the Royal Society for the Protection of Birds (RSPB), just one of many kinds of species which depend on vibrant and diverse insect population for its existence. The Bugs Matter group gathered information on a much smaller but still statistically relevant one in 2019 which covered 599 journeys. Last year that organization collected data from 3,348 journeys.

No data was collected in 2020 because of the plandemic.

After the splat data was collected and correlated with the locations where the insect spatter was gathered, the researchers went to work. That team included naturalists and biologists working on behalf of Buglife – The Invertebrate Conservation Trust, an organization whose declared mission is to save “the small things that run the planet”, and the Kent Wildlife Trust (KWT). Both are based in the United Kingdom.

Among the high-level conclusions of the study, which many have observed in their own less scientific ways by noting how often they had to clean windshields and license plates after a long drive, is the radical shift in how prevalent flying insects used to be and how rapidly they have declined, even on a qualitative level. In the 2004 RSPB collection, that metric showed up when it was observed that just 8 percent of all travels by car covered by the study concluded without any insect collisions recorded. In 2021, 40 percent of the travels finished with zero insects splatting on cars’ license plates.

While some questioned whether perhaps more insects were whisked away from the license plates by improved aerodynamic design of the vehicles, that was quickly proven wrong by evaluating correlations between total insect count and vehicle type.

A second major conclusion showed that the total insect splat counts across all of Great Britain have dropped by 58.5 percent between the 2004 survey and the 2021 one. Of the major geographic areas evaluated in the study, England showed the most precipitous drop, with 65 percent fewer flying insects compared to the information from just 17 years earlier. Wales showed a 55 percent drop and Scotland only a 28 percent drop.

Though the researchers acknowledge these are just samples and the data could be skewed based on unique characteristics for each year studied, they are backed up by other studies. One such analysis which used a similar data gathering process as this one has been using car windshield bug spatter in surveys conducted in rural Denmark every year from 1997 to 2017. It found there were 80 percent less flying insects collected in the most recent year compared to when they started.

So even if either of the three years in the Bugs Matter analysis were perhaps healthier-than-normal or worse-than-normal, the Danish study information suggests this latest analysis is probably not far off.

A study published in the 18 October 2017 issue of the science journal PLOS One reported the results of a 27-year study which found a seasonal decline of flying insects of 76%, and mid-summer decline of 82% over the 27 years of study.

It is a situation which a previous study of collapsing insect populations described as “tearing apart the tapestry of life”. Since insects are important in helping reduce organic waste in the wild, in pollination of flowers and fruit crops, and as a vital part of the food chain for birds and other creatures, losing so many so fast is already on its way to accelerating extinctions of many other living things. It is also disrupting the delicate balance of ecosystems everywhere.

Among the primary causes which the researchers involved in this study say are behind the rapid decline are increased heat due to the climate crisis, more intensive and careless use of pesticides in flower patches and farms, pollution, and urban sprawl. The destruction of insect habitats are high on the list of contributing  hazards.

Matt Shardow, a researcher from Buglife, expressed serious alarm about this latest data.

“This vital study suggests that the number of flying insects is declining by an average of 34% per decade – this is terrifying,” he said. “We cannot put off action any longer, for the health and wellbeing of future generations this demands a political and a societal response. It is essential that we halt biodiversity decline now.”

A colleague of Shardow’s from KWT, Paul Hadaway, who was also involved in the study, was equally adamant about the need for quick action to stabilize insect populations everywhere.

“The results should shock and concern us all,” he said. “We are seeing declines in insects which reflect the enormous threats and loss of wildlife more broadly across the country. We need action for all our wildlife now by creating more and bigger areas of habitats, providing corridors through the landscape for wildlife and allowing nature space to recover.”

These comments of course apply not just in Great Britain but across the world. But, they also fail to account for the reality of runaway climate change. The radical changes humans have made to the atmosphere and surface of the Earth have triggered the planet's self-destruct system. All life on Earth is in peril, not just insects, and NGOs shouting out to save the insects is rather pointless at this stage. What is needed is an effective plan for survival, such as the one being developed by Climate Survival Solutions, which will help preserve a wide range of essential species.

Buglife will be running a new flying insect data gathering period starting in June and running through August. Those interested in participating can sign up here.

“The Bugs Matter Citizen Survey”, written by Lawrence Ball, et. al., is available as a technical report available on the Buglife website. It includes extensive reference citations which back up the essential validity of the raw data and conclusions made by the authors.