Arizona's First Major Wildfire of the Year Bursts Forth

A rapidly spreading wildfire in northern Arizona is currently out of control, destroying homes, and forcing evacuations. It is a warning shot courtesy of the climate crisis for what American west will be facing as the summer heats up. 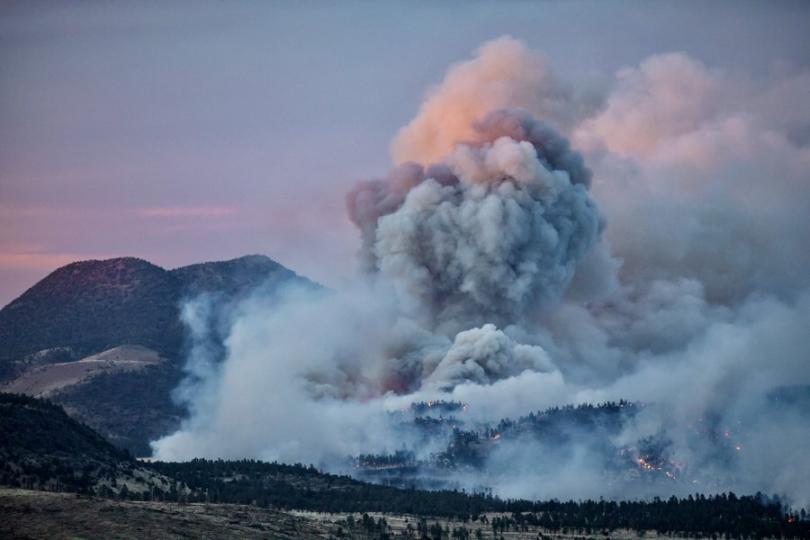 The Tunnel Fire in Arizona has already burned 20,000 acres and is currently zero percent contained. O'Leary Peak, located north of Flagstaff, Arizona, and to the northwest of Sunset Crater National Monument, is shown in the background. Photo: TheHotshotWakeUp, via Twitter

The Tunnel Fire, as it is called, broke out along U.S. Highway 89 roughly 14 miles northeast of Flagstaff, Arizona on April 17, 2022. It was first reported to local authorities at 4:22 pm that day.

The fire is located within the Coconino National Forest.

With parched-dry grass, brush, and occasional Ponderosa pines as fuel and windy conditions since it started, the wildfire took off quickly to spread across 6,000 acres as of April 19. That pace accelerated even faster yesterday, so that by midday it had expanded by an additional 10,000 acres.

Regional high winds with gusts up to 50 mph (80 kph) are causing flaming vegetation to fly upwards into the air ahead of the edge of the main blaze, causing multiple small fires to erupt on what amounts to pure dry kindling in the trees and near the ground. Flames have reached as high as 100 feet (30 meters) above the ground.

The fire is currently moving in a roughly northeasterly direction.

Over 260 firefighters have already been deployed to fight the fire, backed by three bulldozers, 24 fire engines, and one air attack plane. Two air tankers are on order to assist.

but as of the end of the day on April 20 the blaze is zero percent contained.

Over 20,000 acres have already burned in the Tunnel Fire. Dozens of homes and other buildings have been reduced to piles of ash and blackened debris already, with more coming soon. Thousands of residents near the area have already been ordered to evacuate to avoid being trapped as the winds push it simultaneously in multiple directions. 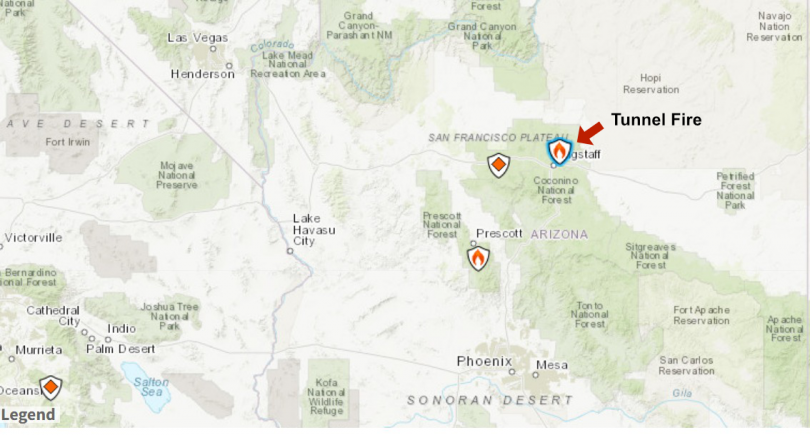 The Tunnel Fire is the more powerful of two wildfires which broke out this week. A second much smaller one located southwest of this blaze had engulfed 1600 acres near Prescott, Arizona, as of yesterday.

Outside of Arizona, a wildfire near Ruidoso, New Mexico, has already killed two people and burned 200 building. In Colorado, a winter grass fire which broke out last week in the Boulder area torched some 1,000 homes. 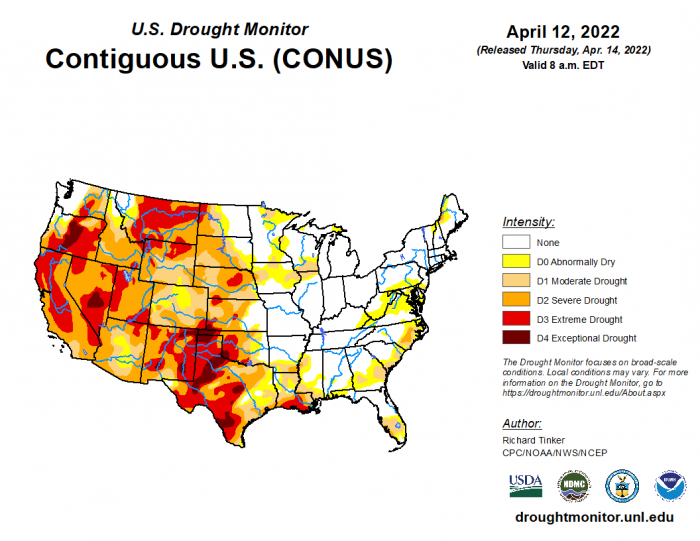 As of April 12, 2022, drought was already widespread in most of the western United States. Photo: The National Drought Mitigation Center at University of Nebraska-Lincoln

What the fires all have in common is they are happening in a region of drought so extreme the pattern has not been this bad for over 1200 years. Aquifers are drying up, rivers and lakes are running out of water, and even the historic Lake Mead and Lake Powell water reservoirs are at record low levels.

The drought is also sufficiently bad that earlier this year the Bureau of Reclamation ordered a cutback of 20 percent in the amount of water usually diverted to Arizona from the Colorado River.

In California, the drought has forced Governor Gavin Newsom to declare five states of emergency because of water shortages just in the last twelve months. The most recent of those was issued on March 24, 2022. Further drought announcements are imminent in the state.

The National Drought Mitigation Center at the University of Nebraska-Lincoln reported that as of April 12, 2022, over 99 million people — just under one-third the total population of the U.S. — are living in areas with at least some degree of drought.

The growing pattern of high temperatures and a lack of water are also responsible for wildfires in the United States occurring three times as often, four times as intense, and over much larger swaths of the country than ever before. That is according to a study published by researchers from the University of Colorado’s Earth Lab earlier this year.

According to the National Interagency Fire Center, some 830,000 acres of property have been destroyed by wildfires just this year alone. Over 2300 firefighters in total are currently deployed to contain mostly uncontainable blazes throughout the region.

In Arizona, roughly 500 firefighters are involved in total in fighting the Tunnel, Prescott, and other smaller fires.

As Tiffany Davila, a spokeswoman for the Arizona Department of Forestry and Fire Management said in an interview about these early breakouts, “Everybody is out on these fires.”

Once the U.S. fire season was just a few months long, running mostly from late August through early October. It was also centered mostly on major fires in a few locations in California and Arizona. Now it has spread from both of those locations to every state in the U.S. West, from as far east as New Mexico, northwards to Nevada and along the west coast up across all of Oregon, and into southern Washington state.

It also shows up in most of those locations all year long.

As of the end of the day yesterday, the Tunnel Fire was continuing to spread and was zero percent contained.