A meat processing firm is using biodigestion to deal with animal wastes, striving to reduce the sector’s emissions and create electricity for the national grid. 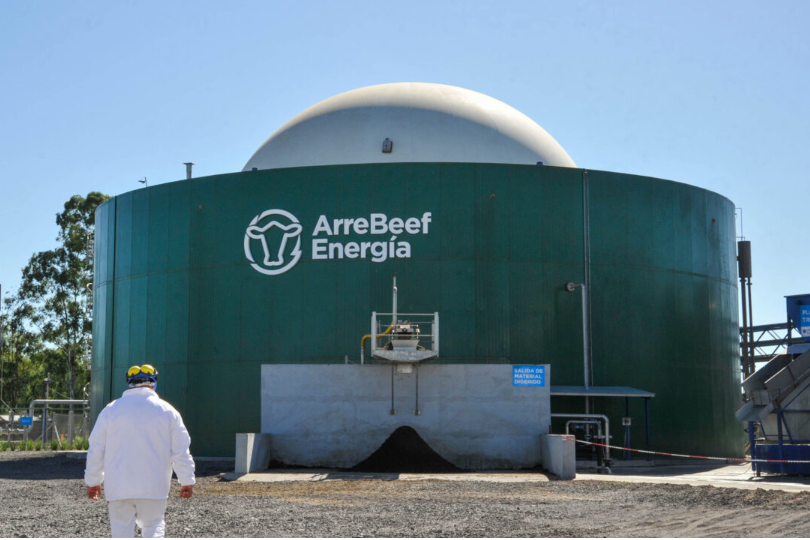 Argentina’s ArreBeef is pioneering the use of animal wastes to produce biogas as a way to reduce emissions from the livestock industry. The biogas is produced in this biodigester, then burnt to create electricity for the national grid. Photo: Celina Mutti Lovera / Diálogo Chino

“This project is based on the principles of the circular economy where nothing is lost and everything is transformed. We are taking the word ‘waste’ out of the dictionary here,” Mauricio Accietto tells us, under the relentless summer sun.

Accietto is a plant manager for ArreBeef Energía, a division of the ArreBeef meat processing firm, whose mission is to transform waste into electricity using a biodigester, a tank that breaks down organic materials. At ArreBeef’s facilities in Pérez Millán, a quiet rural town in the north of Buenos Aires province, the company uses manure and organic wastes from the slaughter of more than 1,000 head of cattle a day to produce biogas, and from that, electricity.

According to Accietto, this is a “unique experience of its kind” not only in Argentina, but also at a regional level. “We have not found biogas generation projects like ours. There are around 40 biogas plants in the country, but none with cattle waste,” he says.

With this approach, ArreBeef aims to reduce the environmental impact of livestock farming, which, according to the latest inventory of greenhouse gases in Argentina, is the country’s most polluting sector, accounting for 21.6% of emissions, far above the next biggest emitter, transport, with 13.8%. 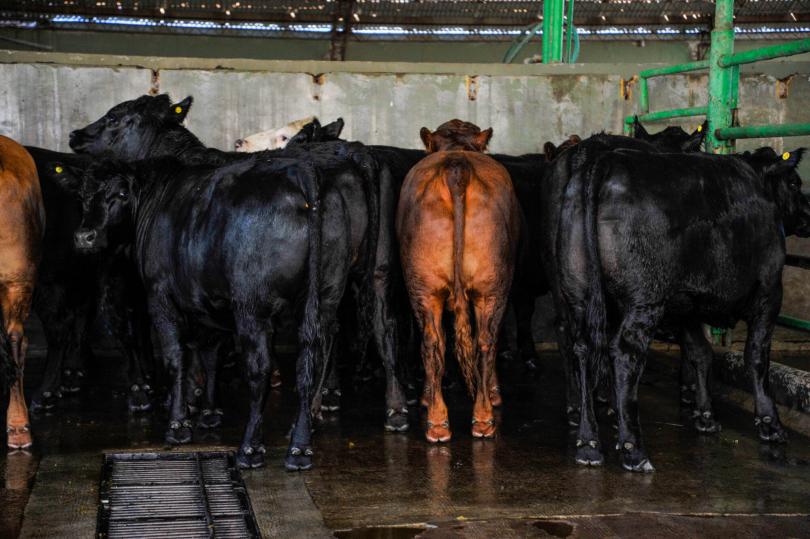 Cattle at ArreBeef’s plant in Pérez Millán, Buenos Aires province. Around 1,000 animals are slaughtered a day here, with the company’s new energy operation hoping to close the loop on waste and reduce emissions related to the process. Photo: Celina Mutti Lovera / Diálogo Chino

Though the company’s innovation cannot address many inevitable life-cycle emissions of livestock – such as those from cow’s belches – by capturing and repurposing many organic waste products, it can help to reduce emissions by “closing the loop” in a form of circular economy. However, whether or not biogas can be considered “renewable” is a divisive issue.

In any case, between the start of the biodigester’s commercial operations in July 2021 and the end of January, almost 4,000 megawatts (MW) of energy has been fed into the grid, avoiding the emission of some 1,519 tonnes of carbon dioxide, according to figures provided by ArreBeef. “It is equivalent to the work that 1,257,108 trees would have to do for a year to mitigate these emissions,” Accietto claims.

The meatpacking plant, which employs around 1,000 people and exports to China and Chile, among other destinations, is committed to improving sustainability and efficiency, in an industry in which customers are increasingly looking for green labels to guarantee their consumption.

Livestock farming generates emissions in different ways: firstly, through the digestive processes of cattle, which emit methane – a gas that is over 80 times more potent than carbon dioxide in its effect on global warming over a period of 20 years. Added to this are emissions from the meat processing industry’s waste and, indirectly, from deforestation linked to the expansion of agricultural land.

Argentina has around 52 million head of cattle, according to data from the Instituto de la Promoción de la Carne Vacuna Argentina (IPCVA). There are some 130,800 farms dedicated to cattle production, according to the latest National Agricultural Census. 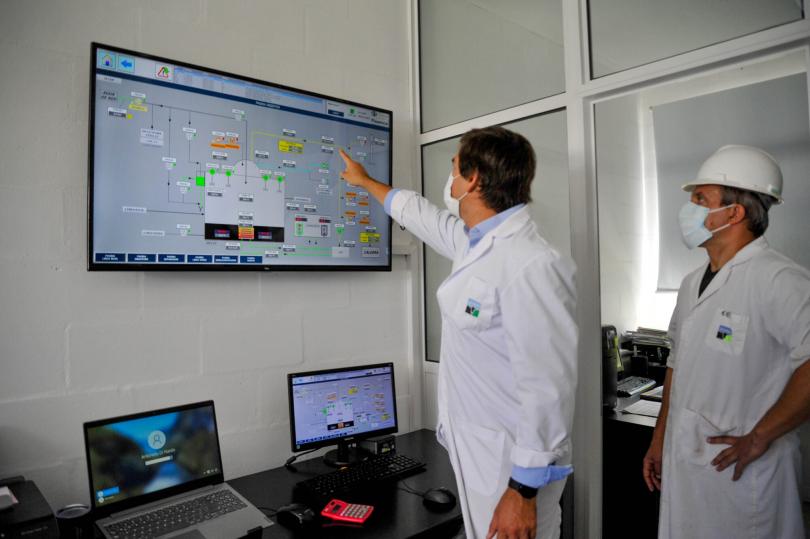 Plant manager Mauricio Accietto explains how bacteria inside the biodigester decompose organic waste to create biogas, which is then fed into the facility’s generator. In 2021, only 13% of Argentina’s energy came from renewable sources, with bioenergy accounting for just 6% of this renewable generation. Photo: Celina Mutti Lovera / Diálogo Chino

Globally, livestock farming is responsible for 14.5% of human-driven greenhouse gas emissions. In Argentina, this percentage is considerably higher. However, livestock’s overall contribution to emissions is contested by some analysts.

For Argentina’s livestock sector, the main argument is that most of the country’s production is done on natural pastures rather than on deforested, converted land. As carbon accumulates in their soils – and can remain there for up to hundreds of years – pastures can contribute to removing carbon from the atmosphere. Figures within the industry argue that this sequestration potential is ignored, and that the sector’s net emissions be considered in calculations.

Beyond the ongoing debate on how to measure emissions, there are other ways to alleviate the environmental footprint of livestock both during production and commercialization. This is where the biogas operation at ArreBeef, a pioneer in the region, comes in.

ArreBeef Energía began to design its project in 2018 under RenovAr, a national programme launched in 2016. The scheme has offered regular public tenders in which different companies present their investment projects and the price at which they are willing to sell their generation capacity. 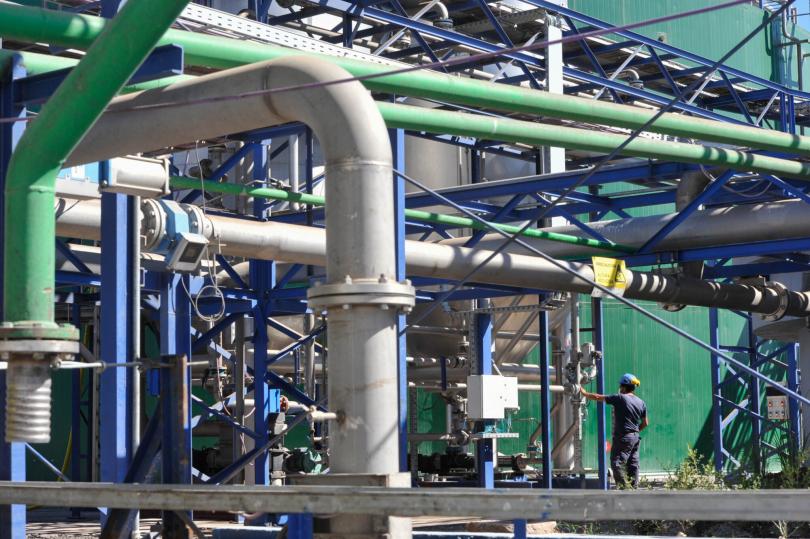 Biogas produced at ArreBeef Energía is used on-site to generate electricity that is then fed onto the national grid. The company has signed an agreement with the government to provide a minimum of 7,200 MW annually. Photo: Celina Mutti Lovera / Diálogo Chino

“At that time we started to study the potential of our organic waste because we knew we could be more efficient in its use,” Accietto recalls. The company set up a project to generate biogas and then transform it into electricity to be fed onto the national grid.

The contract that ArreBeef signed with the national government establishes a commitment to contribute a minimum of 7,200 MW annually to the grid, to be distributed on either of the two medium-voltage lines that reach Pérez Millán, the town where the plant is located.

To this end, the company built a biodigester, a large tank that is filled with organic waste and is hermetically sealed. As the organic matter decomposes inside the tank, it produces biogas, a fuel that can be captured and used to generate electricity by combustion.

The biodigester at ArreBeef Energía is fed with organic waste from different sources. Two come from industrial drains, which the company calls the “red” and the “green” lines. The red line is the blood and remains of the animals, while the green line contains manure from the trucks used to transport the animals, their pens and the contents left in the animal’s stomach at the time of slaughter. 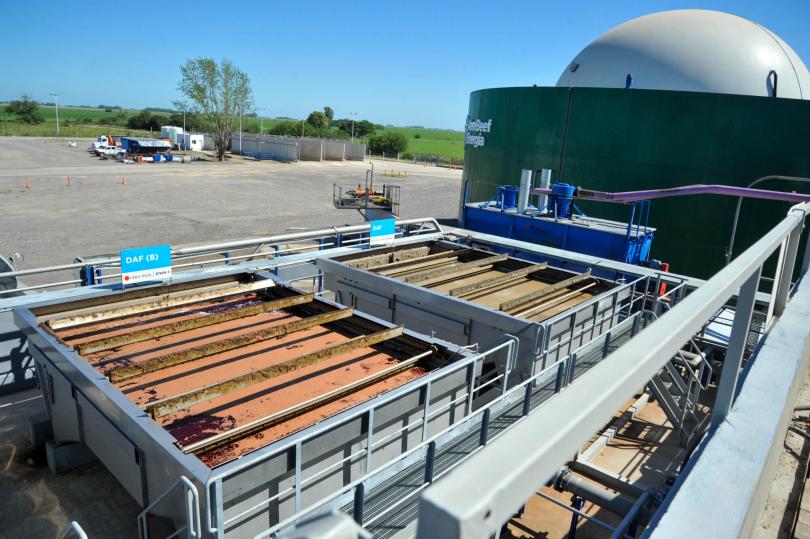 The two “lines” of waste, ready to be fed into the biodigester. The red line, left, contains blood and remains from animal slaughter, while the green line, right, is for manure. Photo: Celina Mutti Lovera / Diálogo Chino, under a CC 4.0 License

There are two other lines of waste that feed the biodigester: the remains of animals that arrive dead at the slaughterhouse and those that are likely to have a disease; and tallow from slaughter.

Inside the biodigester, two types of bacteria – anaerobic, those that require no oxygen, and mesophilic, which grow in moderate temperatures – get to work on decomposing the waste. “We need an absence of oxygen, ensuring that it is 100% airtight, and on the other hand the bacteria need a temperature of around 40 degrees,” Accietto says.

The bacteria transform the organic matter into a biogas that has a methane content of around 70%, while the rest is carbon dioxide. The biogas is captured and burned as fuel for a generator that then feeds onto the grid. The plant has a maximum power output of 1.5 MW per hour.

ArreBeef Energía explained that the electricity generated by the biodigester is supplied in its entirety into the national electricity system, with none of it used for self-consumption. “The value of the sale of energy from renewable sources versus the [cheaper] price of the energy we take from the non-renewable grid makes a differential that explains it,” said Accietto. 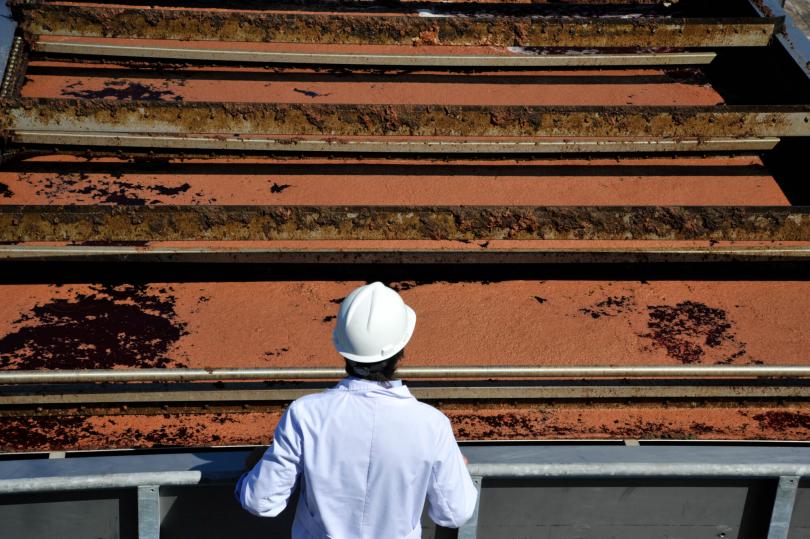 A worker at ArreBeef Energía inspects the “red” line of the company’s waste-to-energy facilities, which processes remains from slaughter that may otherwise be incinerated. Photo: Celina Mutti Lovera / Diálogo Chino, under a CC 4.0 License

For the company, the investment in a biogenerator is a bet on the future. "Although we do not yet have eco-labeling, we are already communicating to our suppliers and our customrs what we do with organic materials so that, in the future, we can be on our way to achieving a carbon-neutral product," Accietto said.

Fernando Vilella, director of the bioeconomy programme at the University of Buenos Aires, said sooner rather than later, the markets that pay the most for Argentine meat will ask for this type of certification. “Consumers will increasingly ask for more information on the environmental footprint of food, and this information is still very limited in Argentina,” he says. “We have to make an additional effort and generate strategies to associate a characteristic of reduced environmental footprint with the product.

“The productive base is already in place and it is good, the problem we have ahead of us is that we have to certify and trace,” the UBA researcher adds. “There is work to be done and there are only a few years left, because without that we won’t be able to sell to China, Europe, Russia or the United States – the markets that pay the best.”

ArreBeef’s experience seems, for now, more the exception than the rule in Argentina, where the transition to a green economy faces many difficulties due to macroeconomic problems, as well as political discontinuities and a lack of coordination between the public and private sectors.

“In agriculture and livestock, Argentina has good parameters to compete, but everything is poorly measured and poorly mapped out. The state and the private sector must make an additional effort and generate strategies for this, because this is what the world is going to demand,” Vilella said. 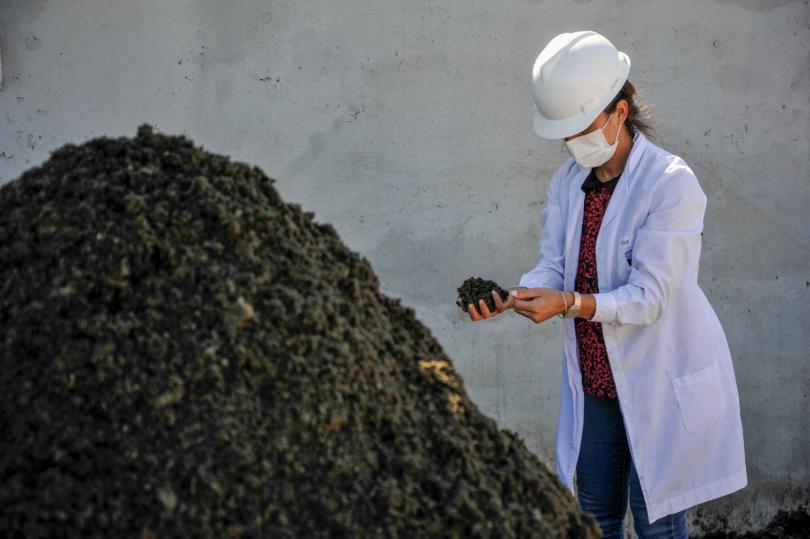 Antonella Di Nardo, laboratory lead at ArreBeef Energía, inspects a pile of “digestate” that has been discharged from the biodigester. A byproduct of the anaerobic digestion process, digestate is used as a fertilizer. Photo: Celina Mutti Lovera / Diálogo Chino, under a CC 4.0 License

In 2021, according to official data, renewable energy sources covered 13% of the country’s electricity demand. While wind (74%) and solar (13%) accounted for the largest shares of renewables, 6% came from bioenergy. At this rate, the country will fail to meet the goal of 20% green energy by 2025, as set out in national law 27.191, according to Carlos Villalonga, a former member of the Chamber of Deputies and former director of Greenpeace Argentina.

“Argentina will suffer from this low percentage of renewables,” Villalonga says. “This will begin to affect exports because our companies will compete with others that will be able to show a lower carbon footprint, either through less deforestation associated with livestock, or through lower consumption of fossil fuels”.

For the Fundación Ambiente y Recursos Naturales (FARN), an Argentine NGO, the state’s continued promotion of hydrocarbon activities “goes against a clean and fair energy transition, and against international commitments”. According to a report from the organization, in 2021, for every peso budgeted for renewable energy and efficiency, 184 pesos were allocated to the generation of dirty energy.