A Saudi Arabia based research team has developed an innovative integrated system for drawing water from the atmosphere in the most arid of climates, then using it to cool excess heat from solar panels and grow crops. 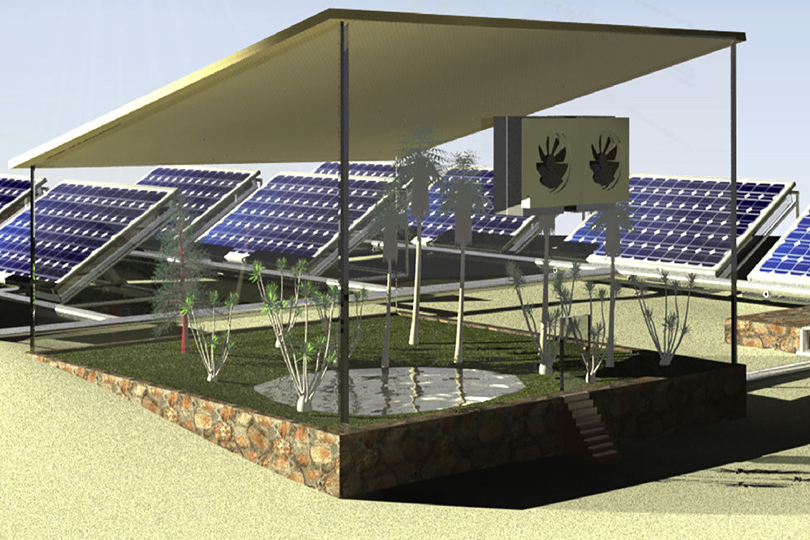 The working model system used by researchers to evaluate their "self-sustained and solar-driven, integrated water-electricity-crop co-production system (WEC2P)". It is targeted for use in arid climates. Photo: King Abdullah University, Saudi Arabia

The scientists refer to their solution as “an integrated water-electricity-crop co-production system”, using the acronym WEC2P for short.

Structurally, there are three major parts to the system.

A high-level graphical view of the various systems involved in the WEC2P system the researchers tested. Photo: King Abdullah University

The water generation system relies on using a customized hydrogel to absorb water from the atmosphere.

Hydrogels are three-dimensional polymer chains which, while they are themselves insoluble in water, can hold large amounts of water. They are commonly used in a wide range of biomaterials and biomedical applications. A good exemplary use of the materials is in some of the latest soft contact lenses, which are themselves nearly 100% water in content and yet do not “leak”. Because of their polymer structure keep their geometric shape, a critical feature for them to maintain their optical imaging properties when placed on the eye. Their retention of water and high water content enable them to be extremely comfortable to wear for long periods of time.

In the current application, the hydrogels are attached to sorbent materials which first collect water from even some of the lowest humidity atmospheres anywhere, such as in deserts. As temperatures cool overnight and the combination hydrogel/sorbent materials begin to collect water, a wicking system pulls much of the gathered water away. This is to avoid losing much of the water when temperatures rise and evaporation would otherwise pull the moisture back into the air.

The electrical power system relies on solar panels to generate electricity. As with all photovoltaic devices, despite their relatively high efficiency in converting the sun’s energy into electricity, there is always excess heat generated on the solar panels. The hydrogels adjacent to the sorbents used for water generation have a second duty for this subsystem, as they are used to cool the solar panels. By doing so, they extend the panel’s lifetime and have the effect of increasing photovoltaic collection efficiency simply because they run cooler.

It is because of this effect that the researchers chose to integrate their water harvesting technology with their solar energy generation system, rather than have them run independently.

Electrical power from the solar system used in the test system was stored in lead-acid batteries attached to the equipment.

The third subsystem in the WEC2P is the crop-growing system, which, except for the source of the fresh water, was conventional in design. With hydroponic systems instead of the solution used for these experiments, a further degree of self-contained operation of the system could be achieved and with less need for overall water use.

The system was tested over a period of three months in Thuwal, Saudi Arabia, over a net period of 40 days. The scientists were able to prove the water system, including the specific hydrogel makeup, sorbents, and wicking systems generated water which tested fully safe for drinking under standards set by the World Health Organization. The tests also showed the integration of the hydrogel cooling from the water gathering system consistently delivered between 9% to 9.9% more electrical conversion efficiency from the solar panels than would have happened otherwise.

The experiments were conducted in the summer of 2021.

Professor Peng Wang, a lead author in the study and part of the environmental science and engineering department at Saudi Arabia's King Abdullah University of Science and Technology, expressed high hopes for this integrated system’s potential in the much hotter future ahead for all.

"A fraction of the world's population still doesn't have access to clean water or green power, and many of them live in rural areas with an arid or semi-arid climate. Our design makes water out of air using clean energy that would've been wasted and is suitable for decentralized, small-scale farms in remote places such as deserts and oceanic islands,” he said in recent comments to the press on this subject.

The paper describing the technology and field test results for it, “An integrated solar-driven system produces electricity with fresh water and crops in arid regions,” by Renyuan Li, et. al., was published in the 1 March 2022 issue of Cell Reports Physics.