Increased Radon Risk Flagged as Permafrost Melts in the Arctic

A new study authored by scientists from the UK and Canada is warning radon stores currently buried deep in Arctic permafrost could release at rates 100 times current values current levels as temperatures continue to soar in the northern latitudes. 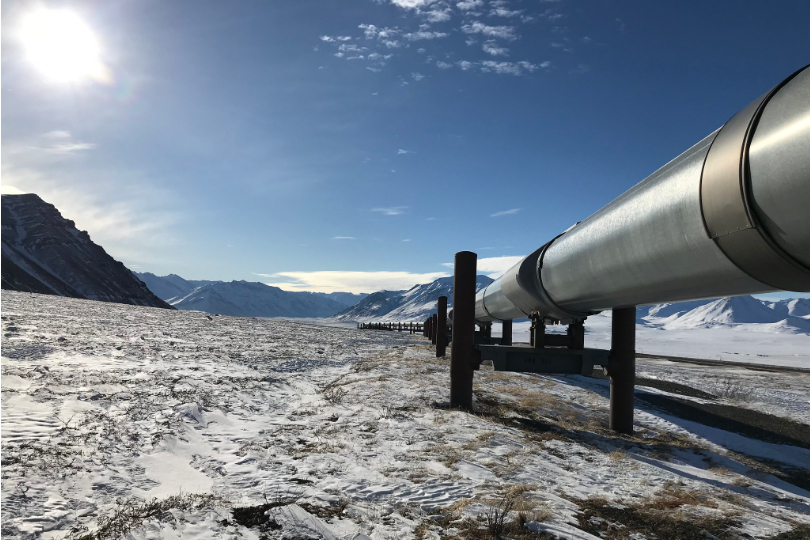 The Trans-Canada pipeline in Alaska is built atop endless expanses of permafrost. All of this is currently melting far faster than in the past thanks to global heating, releasing radon into the atmosphere at dangerous rates. Photo: Alaska Region, U.S. Fish and Wildlife Service

Radon, a radioactive gas, is an element which appears naturally in soils across the planet.  It is colorless, tasteless, and odorless. It is also a powerful carcinogen tied to lung cancer and other illnesses.

Based on a new study conducted by researchers from Geostack, a scientific institution based in Quebec, and the University of Leeds in the United Kingdom, the rapid melting of the permafrost could close to the Arctic could release those stores rapidly.

While currently only at most 10 percent of the radon stored in those soils makes its way out into the atmosphere, the study shows that virtually all that radon could be released quickly as global heating continues.

When it does so, the radon will penetrate ground floors of homes and other structures built atop and around the permafrost, and possibly become trapped where people currently live and work. It will also rise above ground to pollute air all species breathe.

According to the scientists, the radon that will be released under this scenario will likely remain above carcinogenic danger thresholds for as much as seven years. Cancers may only be triggered during that time and could take years later to be detected, but the long-term damage will begin almost immediately.

“Our results show clearly that the pent-up reservoir of radon can be released into the basements of buildings over a long period and will remain above radiation action levels for four to seven years,” said Paul Glover, a University of Leeds petrophysics professor, in a statement accompanying the release of the new paper.

“Since there has been no perceived historical radon problem in these communities and the gas itself is undetectable without specialist devices, we regard this as an important and totally avoidable threat to the health of the northern communities,” Glover continued.

Glover also noted the danger for contracting radon-induced lung cancer just from inhaling the gas, as well as how those who currently are tobacco smokers will be at higher risk for the disease when exposed to the increased quantities of radon.

Why that matters where permafrost melts in the Arctic is that smoking is, he noted, “up to 4.4 times more prevalent than in other communities.”

He also noted that, with Radon “known to be the second most important cause of lung cancer after smoking,” it “exacerbates radon-acquired lung cancer rates by about 26 times.”

Some housing in the Arctic which is currently built on stilts will be less impacted by the radon leakages from the permafrost. That is because the gas will have the chance to dissipate somewhat before making its way through housing floors and becoming trapped inside living spaces. Unfortunately, most of the buildings in the Arctic regions are built on the ground and are therefore at higher risk of radon contamination as the permafrost melts.

In Alaska, the state’s Division of Geological and Geophysical Survey already distributes radon test kits to households, so they can monitor potential exposure. Those kits will be needed more than ever as the permafrost continues to melt.

The newly released study covering these findings, “Increased Radon Exposure from Thawing of Permafrost due to Climate Change,” by P.W.J. Glover and M. Blouin, was published in the journal Earth’s Future on January 31, 2022.